Last summer, Fudge Park set up shop in Bristol for the three month shoot of the teen coming-of-age film The Festival, made in association with Film 4 and Entertainment Film Distributors. 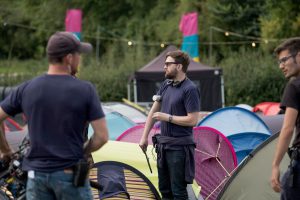 The film sees Nick, played by Joe Thomas (The Inbetweeners, Fresh meat) attend a three-day festival after a messy breakup. As to be expected from the creators of The Inbetweeners, debauchery unfolds as Nick and his friends embrace the festival atmosphere.

Producer Claire Jones (Sightseers, Ghost Stories) says that “it was crucial for us to have the perfect setting. Locations played a huge part in deciding where we wanted to film”. The decision to set up shop in Bristol and surrounding areas rested upon the fact that crews are “incredibly skilled” and “the landscape seemed to fit with the idea of a big music festival”.

To recreate a convincing festival site, the production scouted nearly 300 fields until they found the perfect one near Chew Magna. Very few fields, it seems, have star potential. Jones comments that this field “with its rolling hills, lush greenness and friendly neighbours”, was exactly what they were looking for. Local craftsmen and artists were used to create the large set that hosted the production for 10 weeks over which time storms hit the West Country. The set “turned into a lake of mud” which admittedly are not ideal conditions to film in, but Jones argues that “to feel like a typical British festival we decided that mud and rain could make it feel authentic. The end result looks seamless”. 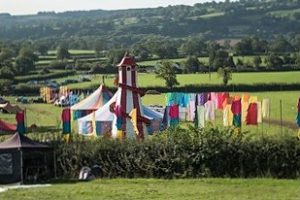 The Bristol Film Office assisted with location searches and arranged unit bases while filming on location. Natalie Moore from the office noted that “being a city that hosts a number of large events for the public each year, we’re well suited to facilitating large crowd scenes like the ones required in this instance”.

Bottle Yard Studios was the base for the film. As one of the most equipped regional production hubs, Bottle Yard have enticed feature films and high-end TV series such as Doctor Who, Poldark and Ill Behaviour to use Bristol as their base.

Feature films are currently afforded a 25% tax rebate when 10% of their budget is spent within the UK.