Written by Shona Smith on Sep 18, 2018. Posted in Awards and Festivals / General Interest

The seventieth Emmy’s awards show took place in LA last night acknowledging the best in the television industry. British talent shone bright on the night, going on to win several of the top awards. 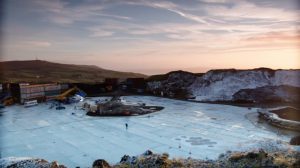 Game of Thrones walked away with several accolades including the lusted after prize for outstanding drama series. Including wins in the creative arts categories, the production took home nine Emmy’s, one of which went to Peter Dinklage for best supporting actor in a drama series. Each season, the production travels to numerous locations which provide the varied landscapes of Westeros's Seven Kingdoms. Beyond the Wall, one of the most anticipated episodes in the most recent series involved an intense battle between warring factions in the fictional land. A large-scale outdoor set in Wolf Hill Quarry in Belfast was used for the shoot and additional shots for the sequence filmed in Iceland. Numerous locations including Spain, Croatia and the UK all feature prominently throughout the shows 8 seasons.

Claire Foy won best actress in a drama series for her portrayal of Queen Elizabeth II in Netflix’s The Crown. The Crown follows the intimate lives of the British royal family from the year 1947, when Elizabeth II wed Prince Philip. The show is filmed throughout the UK and in certain global locations and often employs creative doubling to stand in for the stately locations. For example,

Ely Cathedral stood in for Westminster Cathedral during the royal wedding scenes while Elveden Hall in Suffolk was selected to double for Ghana because of the Eastern interiors created by former resident the Maharajah of Punjab in the late nineteenth century. The series also filmed in the royal residences in Balmoral as well as various locations in South Africa. 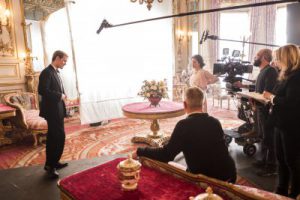 Principal photography for the third series is currently underway. Olivia Coleman has taken over the role of Queen Elizabeth II as the show moves onto show the life of a mature Queen. In her acceptance speech, Foy dedicated the award to the cast and crew for the next series explaining that “the show goes on, which makes me so so proud, so I dedicate this to the next cast, the next generation”. 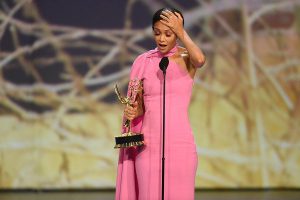 Another British actress, Thandie Newton was also recognised for her work winning  the award for best supporting actress in a drama series for her character in Westworld. Visibly shocked, Newton thanked the cast and crew of Westworld and JJ Abrams. In the sci-fi, Newton plays an android “host” from Westworld, a virtual themepark which players enter to experience life in the wild west. The Moab desert in Utah is a key location for the production. The desert’s unique red rocks and vast deserted roads provide the surreal backdrop which add an eerie twist to the wild-west landscape. Further production took place in Santa Clarita and Los Angeles in California. Additional desert shots were filmed in Arizona. 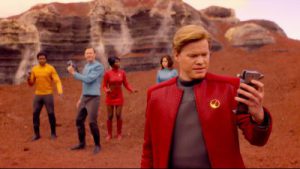 Charlie Brooker won the award for best writing for a limited series for the fourth season of Black Mirror. The darkly gripping science-fiction anthology series produced for Netflix uses varied locations. Iceland, Ontario, Spain, Nevada and the UK all featured in the latest series. One of the most loved enjoyable episodes,  “San Junipero” from the third series doubled Cape Town for a simulated reality town where dreams can come true.

Other big winners included The Marvelous Mrs Maisel which shoots in New York, and at Brooklyn’s Steiner Studios and An American Horror Story: The Assassination of Gianni Versace, which films in numerous locations in the state of California. 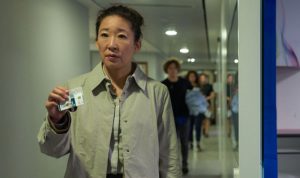 Amidst the celebration, there were some unexpected losses on the night. While popular BBC America mini-series Killing Eve received a nomination, Sandra Oh did not receive the award for lead actress in a drama series. She did, however receive a shout out from the category winner Claire Foy during her acceptance speech. Both The Handmaid’s Tale and Atlanta  won big at last years Emmy’s. This year however, each show walked away with only three creative arts awards.

The Moab Film Commission will be exhibiting for the first time at FOCUS 2018. Register here to receive a free delegate badge.