Written by Murray Ashton on Sep 21, 2018. Posted in Contributors

In early spring I scouted a gem of a location dubbed Iceland's best kept secret. The Westfjords is the country’s most remote region, and Europe’s most westerly point, and little known to filmmakers. Only one Hollywood picture, Justice League, has ever ventured there to shoot.

It certainly isn't a secret that Iceland is one of the world’s premier filming destinations with countless productions using its outstanding locations. These productions have acted as the perfect ‘soft power’ vehicle to promote Iceland’s tourism industry which has accelerated as a result from roughly 400,000 tourists in 2006 to over two million today.

"The Westfjords offers an exceptional location for car shoots."

However, what makes the Westfjords region so special is that mass tourism doesn’t venture here. There are only 7,000 inhabitants in the region (1.2sqkm per person) making it the perfect spot for uninterrupted location filming. It’s one of those rare places (think Isle of Skye or remote South Island New Zealand) where around every corner you come across yet another extraordinary location.

I scouted many remote but tarmacked airstrips hugging the side of a huge fjords just above sea-level but still surrounded by mysterious mountains (think 007). I visited the Latrarbjarg cliff which covers 17km of coastline with the highest point soaring up from the crashing waves below to a height of 450m – what a shot!

The Westfjords is also home to what many call Iceland’s most majestic waterfall. The Dynjandi seems to appear out of nowhere and cascades down to the fjord below. 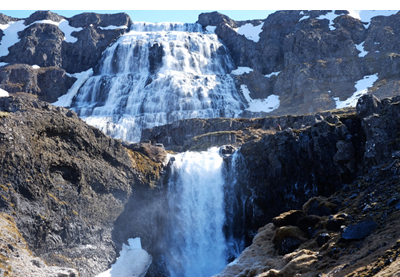 But what struck me most about this region is that it's a perfect location, and I mean perfect, for car shoots. We all know that car scenes are a very common aspect of film production and what I call ‘the business of shooting cars’  is huge. All manufacturers need car launch films, dealership films, car commercials and web films for all their different models.

80 million passenger cars were manufactured in the world in 2017 with a further 18.4 million commercial vehicles on top of that. The automotive industry spends more than any other on advertising in excess of USD50 billion a year. Volkswagen is the leader spending close to USD7 billion alone on car advertising. Car makers spent GBP314 million on TV advertising in the UK last year and 88% of all car buyers start looking at films of cars on their mobile devices as a starting point.

The Westfjords offers an exceptional location for car shoots so it came as a great surprise when I asked the go-to location fixer, Heimir G Hansson at the Westfjords Information Office, how many car shoots he gets a year. His reply was "none, we have never had a car shoot here".

The Westfjords has roughly 600km of magnificent, high quality tarmacked and well maintained roads. There are hundreds of sweeping bends at sea level or on cliff edges in stunning fjord locations. Roads with inclines, bridges, causeways, hump backs, mountains, straight roads that are trafficless (a car or two an hour off-season) are all available and safe to use.

"Helicopters are in abundance in Iceland."

The other great thing about these roads is that they are often built  two metres above ground level to allow for snow clearance. This makes it easy to see the entire vehicle when panning from virtually any angle. Iceland is almost treeless so there is nothing to impair your shot. There is also about 350km of gravel roads, including abandoned never used mountain roads and paths (off-road driving is strictly forbidden in Iceland). Road 643 (north of Holmavik heading to Djupavik), where some scenes for Justice League were shot, is extremely scenic and Heimir’s favourite road in the area.

Locking off roads is easy and as the crime rate is close to zero there are lots of policemen with time on their hands who are happy to assist. Nearly every fjord has a tarmacked air strip alongside it that are available to use for filming purposes and car product shots. The perfect pack shot location with mountains and/or sea.

A shot of an about-to-be-launched car photographed by a paparazzi and then appearing in an international auto magazine is every car manufacturers worst nightmare. The press will pay top dollar to get that shot for their readers and be the first to reveal the new vehicle. Shooting cars in remote locations helps escape the car paparazzi and their long lenses. They have even been known to dress up as duck hunters! Another great reason to shoot cars in Westfjords is that the open spaces allow for early detection of any unwanted photographers.

The best months to shoot (unless you want heavy snow conditions of course for which Westfjords is also perfect) are late May to the end of September. The light hours at this time are a producers dream. To give you an idea, on May 10th bright dawn is at 02 :43 and sunrise at 04 :25. Sunset is at 22 :36 and darkness at 24 :23. During most of June there is no darkness at all. The midnight sun!

"The people of Westfjords are rough and tough but extremely film-friendly and welcoming."

Helicopters are in abundance in Iceland and are mainly based in the capitol Reykjavik just 45 minutes flying time to Isafjordur, the largest town on the Westfjords peninsular. No electric cables or trees makes for less aerial hazards and quicker flying times. Helicopter camera mounts, both nose and side mounts are available too. The Gyromaster side mount is gyrostabilized and can be mounted on either left side or right side of the helicopter. Other mounts can be shipped in on request. Low level flying over the sea has no permission restrictions except for during bird nesting periods.

There are plenty of water bowsers for road wet-downs and the bigger towns have firetrucks that can either carry water or pump it directly out of the sea for the same job. The road maintenance authority also has water trucks and there is a private company in Isafjordur that can supply bowsers. There are also vacant hangars and barns available for storage or for prepping cars, trucks and motorbikes prior to your shoot.

Hotel and other accomodation availability varies according to which part of the Westfjords you are shooting in. In the entire region there are over 1000 rooms either in hotels, guest houses or self catering flats. Isafjordur can accommodate 200 people and most other towns between 30 and 80. The food is great too. Iceland lamb is considered the best in the world (sorry to any Kiwis reading this) as sheep are free to roam. Icelandic fish is also world-renowned.

The people of Westfjords are rough and tough but extremely friendly and welcoming. Film permissions are quick and easy to obtain. It helps to have a population of just 7,000 as they all know each other and are most likely related. They are open, film-friendly and flexible.

I hope you enjoy the Westfjords as much as I did.

I'd love to hear from you if you know of, or come across, a magic location on your travels.