BBC and AMC miniseries The Little Drummer Girl spent twenty-four days shooting in Greece, at archaeological landmarks including the Acropolis and the Temple of Poseidon at Sounion. Set in the nineteen-seventy-nine, the miniseries is an adaptation of John Le Carré’s novel and stars Alexander Skarsgård (True Blood, Big Little Lies) as an Israeli intelligence officer who pulls a British actress played by Florence Pugh (Outlaw King, Marcella) into his undercover world of espionage after a holiday romance. Produced by independent studio The Ink Factory, who also produced Le Carré adaptation The Night Manager.

Governmental support was crucial in allowing the production to realize a faithful adaptation of the book. Key scenes in Le Carré’s novel takes place in Athens’ Acropolis and the Temple of Poseidon at Sounion where filming is tightly restricted. The Hellenic Film Commission, the arm of the Greek Film Centre which deals with incoming productions, supported the production by facilitating filming permits for shoots at the ancient archaeological sites and the miniseries even secured a permit for the first ever night shoot to have taken place at the Acropolis.

There was some uncertainty over whether the production would be able to film at the country’s treasured archaeological sites when the first application was rejected by the Greek Central Archaeological Council (KAS). However, with support for the production emanating from the highest levels of the Greek government, a second application was successful. Director Park Chan-wook said of the shoot “it has been an incredible experience to film The Little Drummer Girl in the very locations described in John le Carré’s book. The immense privilege of shooting at such historically and culturally important places such as the Acropolis or Temple of Poseidon cannot be understated. Greece, as the birthplace of Western drama, offers filmmakers a canvas of unique resonance and, for me, it is the perfect place to tell the story”.

Modern Athenian districts and nearby towns were also used to double for a number of different locations. Nikaia, a neighbourhood of Athens was used to double for Palestine. Eighteen kilometres north of Athens, the coastal town of Elefsina was used to double for Lebanon. Kineta, a beach town an hour west of Athens masqueraded as Naxos.
Executive producer Simon Cornwell, co-CEO of The Ink Factory noted that “the variety and scope of filming locations available in Greece has made it the perfect place in which to bring The Little Drummer Girl to life. We were able to shoot not only extraordinary scenes set in Greece, but scenes set in Lebanon, Israel, Yugoslavia (as it then was) and Rome as well”. 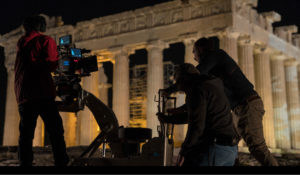 The series premiered the BFI London Film Festival this weekend and the first episode will air on BBC1 on Sunday 28th October.

Greece recently upped their cash rebate incentive to 35% to become a more competitive filming location. The incentive is available to film, television, documentary, animation and digital games development. A minimum local expenditure of EUR100,000 for feature films and documentaries and EUR60,000 for digital games is needed to access the rebate.

The Hellenic Film Commission will be attending FOCUS 2018 in London on the 4 & 5 December. Register here to receive your free delegate badge and explore the possibility of shooting in Greece, and many other fantastic locations.