To some extent you would be right but with the advances in mobile communications the services provided on location need to try and replicate those provided within a studio complex as best they can. Both are heavily dependent on good connections to the internet, both use mobile technology but where as the studios have their infrastructure in place, with fibre contracts ready to roll out, the locations provide us with a much more challenging environment. On location Wi-Fi networks are provided, both on set and the Unit Base, for production personnel to access the internet. Hand held radio communications are still commonly used, loud hailers where necessary.

"There is always going to be a risk of cyber-attacks so it's important the risks are mitigated, a response plan is in place and that systems are designed to quickly recover and resume operation."

Please tell us where the art of film production communication is at today as far as the latest possibilities are concerned. 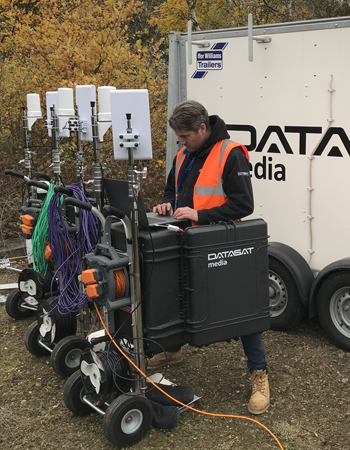 In this digital world we now live in, both personally and professionally, the need for the internet and what it can carry increases on a regular basis. Four years ago, for example, a large production, on location, might consume around 20GB per day, recently we have experienced uses of up to 300GB in one day, with many TB’s now being used to service the productions requirements. One of the new emerging technologies, which has a time saving impact on the structure of film production, is video streaming. It allows the main unit director to see what their 2nd unit is filming when in different locations and producers who can’t be on set watch the output. Undeniably this speeds up the signing off procedure needed in the production process.

We are living in an increasingly dangerous world when it comes to cyber security, what are the security threats to a closed communications system like the ones you provide that producers should know about?

Many people believe that their computers or networks are secure because they rely on technology (firewalls, network devices etc). The truth is that a nation state like North Korea is well skilled in the exploitation and circumvention of these devices and can just as easily gain entry via a phone, web browser, usb, email or via one of hundreds of other attack vectors. Even "air-gapped networks”, those not connected to the internet in any way, can be infected. Stuxnet, a virus that destroyed Iran’s forefront nuclear facility, attacked a range of computers that didn’t even have networking cards and were nowhere near the internet. On that basis, there is always a risk to all systems. What matters most is good old-fashioned best practises like segmentation, intrusion detection systems and hardened infrastructure; there is always going to be a risk of cyber-attacks so it's important the risks are mitigated, a response plan is in place and that systems are designed to quickly recover and resume operation.

"One thing that must also be considered is that the landscape for producers and production teams has changed."

What are some of the biggest closed production communications systems you have set up? Where, on what productions and for what duration?

On Star Wars: Epsode VIII – The Last Jedi, they filmed on location all over the West coast of Ireland for about four weeks, in extreme locations where telephone communications were almost non-existent. We supplied an uncontended satellite system, to carry most of the traffic, backed up with GSM equipment using ultra high gain antennas and RF links to provide the cast and crew with connectivity to the internet as well as assisting with their delivery of video. This was spread over many kilometres, and at times we had close to 1000 devices connecting to the network. The data usage was in the region of 200GB per day, with film units scattered in different locations, filming simultaneously. Rian Johnson, the film’s director, was able to view what all the various units were shooting at the same time.

The smallest would be a TV drama in Devon, supplying a production team of five people, with satellite internet in a location where they had absolutely no communications at all.

Doesn't all this cost a lot so it’s out of reach for smaller productions? 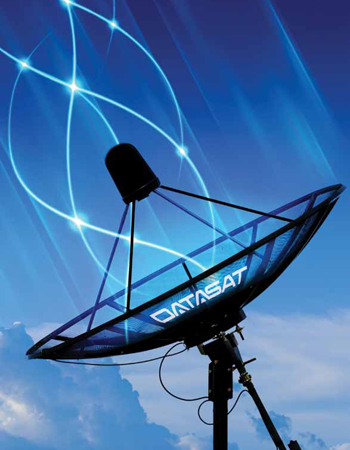 These services can be expensive and for smaller productions they can be out of reach, however when you look at the time saved it can reduce filming costs to film productions. There are solutions for the smaller budget films, but they tend to use simple dongles for internet access. We do advise against this as they possess a security risk in our opinion.

How can you guarantee to producers that the system won't falter mid shoot? Is there a backup?

Technology will always bite you when least expected. Although the equipment we build is ultra-reliable with a range of failsafe mechanisms we have remote access into our systems allowing us to work remotely, diagnosing any issues that might occur. We also have remote alarm systems warning us of power outages, system failures, etc. We always carry spares to every location when replacement is the only option. It’s either that, or the wrath of a production which we’d rather avoid!

What control does the producer have over the system to make sure their sensitive production information, script, story board or movement order are not falling into the wrong hands?

The producer doesn’t have any control on how we build and deliver the service – this is normally passed through to the production team to handle. As for sensitive data, we have various levels of security we can apply to the network, including cyber security experts on hand who can handle the unexpected. As mentioned earlier, cyber-crime is on the increase, both from nation states and malicious individuals. Film productions have a high ransom value, for example, and will increasing be targeted by the criminal element. It’s our job to protect them using the best technology available and policies that include, data loss prevention, cyber awareness and security training, end point security, DDoS prevention and much more. The trick to cyber security is using the teams and tools available to you.

One thing that must also be considered is that the landscape for producers and production teams has changed. In the 1990’s the biggest challenge to film and TV production was the weather. Now, in 2018, the biggest challenge by far is cyber security. But people make the mistake of suffering alone. Producers should be investing time in learning about cyber security, getting to know the people who can keep them secure and understanding the realistic threats they make when they’re in production.

What about production document storage and security?

Most of this is held within a secure studio or central office environment on secure servers, with restricted access, monitored by us or internal IT departments. Larger productions have their own in-house security who monitor the sensitive data held by the productions.

What if you can’t get a line of sight for a satellite connection?

Now there’s a question! In most situations you’ll be able to get a ‘line of sight’ somehow, but where that’s not a possibility we would use RF technology to link up the satellites position to wherever the unit might be. In the past we’ve provided these links from one to 15 kilometres!