Written by Shona Smith on Mar 1, 2019. Posted in General Interest

The formal partnership between the BBC and Screen Scotland will ensure production in Scotland of programming intended for British and international audiences. To back up the deal, the BBC has committed to spending at least 8% of its total network television budget in Scotland.

In terms of programming, the BBC has pledged to creating a minimum of three drama series, three comedy dramas and three “high impact factual series” in Scotland each year. 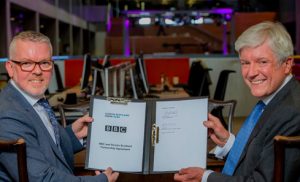 Lord Tony Hall, Director General of the BBC, who signed the deal at the official launch of BBC Scotland’s TV channel in Glasgow, stated that the step is “the first stage in a long-term collaboration involving the BBC, Screen Scotland and potentially other relevant parties with the aim of backing ambitions projects reflecting Scottish culture which can be enjoyed by audiences in Scotland, across the UK and internationally”.

Iain Munro, Acting Chief Executive at Creative Scotland said “This is an incredibly important moment for screen in Scotland. We have a strong history of partnering on projects with BBC Scotland and this agreement sets out clearly how we will build on this. It makes clear our common goals and where we can jointly support the screen sector in Scotland to thrive; producing more high-quality content, developing emerging talent and celebrating our exciting culture”.

The agreement sets out a framework establishing a long-term working partnership set on building a sustainable television sector in Scotland.

Launched in August under the umbrella of Creative Scotland, Screen Scotland also has a GBP3 million Broadcast Content Fund which awards GBP10,000-500,000 for high-quality projects destined for television broadcast, digital broadcast and streaming.

A 25% tax rebate is currently available to national and co-produced high-end TV as well as post-production work done in the UK. There is a minimum core expenditure of GBP1 million per broadcast hour to access the rebate.