Written by Shona Smith on Mar 6, 2019. Posted in Awards and Festivals

Submissions to the LMGI awards show are still open

Submissions for Outstanding Locations in the categories of Film, Television, Commercials and Film Commissions are still open for the sixth annual LMGI awards. 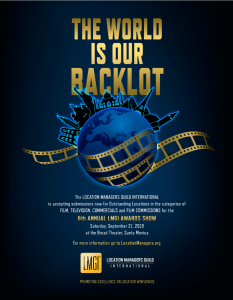 Entries for projects released between 1st January 2018 and 31 May 2019 are eligible for entry.

Submissions are not confined to members of the LMGI so film commissions, location professionals, industry professionals, vendors, studios and production companies can make entries.

The deadline for submissions is Sunday June 9th, 11:59 PST. The awards show is set to take place in September.