Written by Shona Smith on May 23, 2019. Posted in Awards and Festivals

Andalucía’s La Alhambra in Granada (pictured below), Plaza de España in Sevilla and the Monument to the Cadiz’s Court were awarded with the prestigious award “Set of Culture” in Cannes. Locations submitted by the Roma Lazio Film Commission also took home two of the awards that celebrate cinema and TV locations linked to the cultural and historical spirit of the European Union.

Roma Lazio’s submissions of Villa Adriana in Rome (pictured below) and the bridge of San Francesco in Subiaco won in their respective categories. 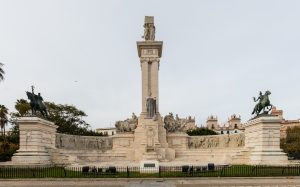 Monument to the Cadiz’s Court

Convened by the European Film Commissions Network (EUFCN) and the Italian Film Commission, the awards ceremony took place at the Hotel Majestic in Cannes Film Festival. A popular vote by European Citizens was conducted on the Cineuropa platform to decide the winners.

Two years ago, Sevilla’s Plaza España (pictured) was also awarded the title of Treasures of European Film Culture, an award given by European Film Academy, that only ten sites in Europe that hold.