But my career as a location scout didn't really start until five years ago. I was working at a local TV channel when another scout I knew asked me to help him with a feature film. I never looked back after that. 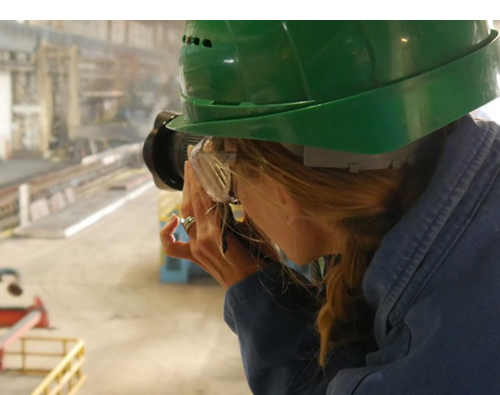 Scouting at a Berlin steelworks

What does this role involve?

You were recently the president of the BVL, please tell us about it.

Let me give you our description from the BVL’s website because it’s perfectly translated into English:

On the 3rd of September 2010 the Location Scouts Guild of Germany (BVL) was founded in Berlin. The BVL is a professional organisation of location scouts who provide their services to feature films, television productions as well as photographic and commercial productions.

The guild serves as an information platform for location scouts, media productions and property managers.

The guild is currently campaigning for location scouting to be officially recognised as a creative profession, with the objective that location scouts will no longer be required to pay business tax and IHK (Chamber of Industry and Commerce) dues. A ‘creative’ classification would also qualify location scouts to apply for Künstlersozialkasse (artists’ social insurance) membership.

The BVL represents the interests of its members by working in cooperation with federal film subsidy boards and film commisisons, thereby generating synergies that allow productions to find locations in the respective funding region more effectively.

We also started a Location Scout workshop last year together with the MDM Film Commission.

What are the more unusual locations Berlin has to offer?

As a born and bred Berliner that’s difficult to say... maybe the UFO that’s just landed (below)!

What locations worldwide can Berlin easily double for?

What well known productions have used Berlin locations in the past five years?

What has been your most difficult Berlin location assignment or request to date and why?

I needed to find an office building in a mid-century style for a German crime series. We needed to shoot on two floors for one week. It sounds easy, but it wasn’t. We didn’t want to use the same building as other shoots just because it was empty. Another example was a shoot for a Toyota commercial. The client wanted to have New York-style skyscrapers reflecting on the car as it drove along. We don’t have much of this much here.

It's always a challenge when the mood is for a different country – when they planned to shoot in the alps of Switzerland but ended up filming in Brandenburg – this is when you need to get creative.

Are there any particular tips that you would like to share with our readers about filming in Berlin?

Do it, but factor in some lead time. It can take some time to get permits. Berlin and Brandenburg are so multifaceted and full of history. Most international crews I have worked with were thrilled. We also have many talented film people here.

What are the most film-crew-friendly hotels in Berlin?

To stay: Every hotel of the Amano Group, Honigmond, Lux 11, Ellington.
To shoot: Circus Hotel, Amano Group, Sofitel and the Waldorf Astoria.

What do you enjoy most about working in Berlin?

It never gets boring. There is always a new location or secret space to discover in Berlin.

What would you recommend crew and cast do to relax in Berlin?

There is a big difference between summer and winter. In the the winter I would recommend a wellness day at Vabali. In the summer we have many waterside locations like Holzmarkt, Sage Beach and Badeschiff that are worth visiting. I would also recommend one of the rooftop clubs like Klunkerkranich, Weekend or Soho House. There are also beautiful lakes in Brandenburg if you like to relax in the country.

What do you do to relax?

I do a lot of yoga and take a lot of saunas! I also get a lot of energy from nature so I often go to the woods for a walk or a run. In the summer I grab a good book and go to a lake or I rent a boat with a friend. Meeting with friends for dinner is always a good way to end the day.

Where did you last take a vacation?

Just on the Canary Islands for 10 days. I love to travel to Costa Rica, but this is such a long journey and is not possible for a short break.

What was the last movie you saw and loved and why?

Calveston. I loved the book and was keen to see how they realised it on screen. I was pleasantly surprised. It was well done with good camerawork and acting.

What book(s) are currently on your bedside table?

Less by Andrew Sean Geer, The Contortionist´s Handbook by Craig Clevenger, The Nest by Cynthia D´Aprix Sweeney and Bad Monkeys by Matt Ruff.

Thank you Tatjana, it has been great talking to you.