Robert Eggers' new horror-thriller The Lighthouse filmed in Nova Scotia, Canada. The production, which has amassed critical praise after its world premiere at 2019 Cannes Film Festival, encountered challenging conditions on location in the eastern Canadian province during filming in 2018. 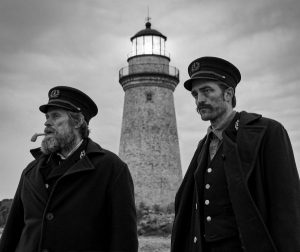 Robert Pattinson (High Life, The Lost City of Z) and Oscar-nominee Willem Defoe (The Florida Project, Murder on the Orient Express) star in the period film. Shot entirely on 35mm black-and-white stock using equipment from the 1920’s and 40’s, the feature has been described as “a fantasy-horror story set in the world of old seafaring myths”.

Although set in Maine, USA, the Canadian province of Nova Scotia was used to double for the New England state. Principal photography began in April 2018, and locations used included the Leif Erickson Trail at the Cape Forchu lighthouse in Yarmouth County (pictured) where a full-scale working lighthouse was built by crew for the shoot. During a post-premiere Q+A director Robert Eggers explained that the set was built because “we couldn’t find a period lighthouse that worked for us, that wasn’t on a remote island that wouldn’t be impossible to get to”. 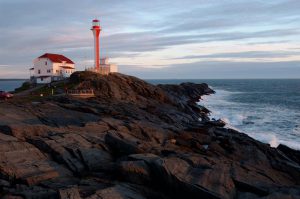 When probed on shooting conditions, Eggers noted that “Forshu was a very unforgiving place, there are no trees and the wind is relentless” but emphasised that “we wouldn’t have had the believability of the atmosphere, and the environment and the storm if we weren’t actually shooting in it.”

Nova Scotian production company Topsail Entertainment (Mr D., The Healer) and RT Features (Call Me By Your Name) co-produced the film while New Regency (The Revenant) joined as co-financier.

Producer Mike Volpe of Topsail Entertainment commented “Working to fulfil Robert Eggers’ unique and authentic vision was a challenge that our Nova Scotia crew relished and met. Filming on the exposed western tip of province at the end of winter was no easy task, but the quality of Robert’s material and the talented professionals involved ensured a terrific film would be made. The Lighthouse is a movie we can be proud of as coming from Nova Scotia”. In comments to makers, RT Features producer Rodrigo Teixeira agreed, stating that “The crews weren’t phased at all. They were remarkably comfortable with working on location and could roll with anything thrown at them”.

In addition to on location shooting, soundstages in Dartmouth and Survival Systems, a state-of-the-art pool facility that creates realistic marine and underwater scenes took place in Nova Scotia. Over 150 local crew were employed during the four-month shoot which spent over CAD6.8 million dollars in the province.

Nova Scotia Screen provides up to 32% of eligible costs for all spending in Nova Scotia, including labour, goods and services in the form of a tax credit. The incentive is stackable with Canada’s Federal Tax Incentive which sits at 16% for service productions.