Written by Shona Smith on Jun 6, 2019. Posted in Production News

Epic, not only in its subject matter, but also in scale Sky Original drama Romulus will tell the history and myth surrounding the founding of Rome. Filming is set to begin with production taking place in Rome and the Lazio region over a twenty-eight week period.

Set in the eighth century B.C. the Sky Original will delve into “the primitive and brutal world in which man’s fate is decided by the merciless power of nature and the gods”. Produced by Sky and Italian production companies Cattleya (Gomorrah, Suburra), which ITV Studios has had a majority stake in since 2017, and Groenlandia a company founded by Romulus showrunner and director Matteo Rovere. The series will be distributed internationally by ITV Studios Global Entertainment.

The ten-episode series is a TV directing debut for Matteo Rovere (Romulus & Remus: The First King, Italian Race). Not only have two entire cities been “meticulously” reconstructed based on historical research, but the series will film in archaic Latin. Hundreds of authentic weapons have been manufactured for the series which will involved thousands of extras. 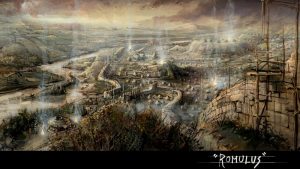 The series points to the growing appetite for Italian made drama for international audiences. Recent undertakings involve My Brilliant Friend for HBO and Gomorrah for Sky Italia.

Nicola Maccanico, Executive Vice President Programming Sky Italia, where the series will exclusively air in Italy notes that “Romulus is an epic series in the true sense of the word, an international project featuring some of the youngest and outstanding Italian talents. A project that has at its heart what is perhaps the most recognizable brand of our country, Rome, which is once again set to attract worldwide attention with a great story to tell”.

Italy provides a tax credit worth 25% to foreign a co-produced feature films and documentaries, as wells as TV Films and series. At least 60% of the film must be shot in the country, and it must pass a cultural test. In addition, foreign productions are exempt form the 20% VAT / Sales Tax.

Rome Lazio Film Commission also operates a film fund open to feature film and TV film or series co-productions. At least 50% of the project must be shot in the region.