Written by Shona Smith on Jun 24, 2019. Posted in Awards and Festivals

Cannes Lions 2019: The Truth is Worth It from Droga5 and Furlined takes the Grand Prix in both Film and Film Craft

The five-spot campaign for the New York Times used typography, video and sound footage to show how the paper’s journalists uncovered some of the most important stories of the day.

With the tagline “The truth doesn’t report itself. The Truth takes fearlessness / courage /rigor / resolve / perseverance. The Truth is worth it” the campaign shows the lengths the journalists go to report breaking stories. Directed by Marin + Lindsay of production company Furlined, the campaign comes from Agency Droga5.

The Palm D’Or for the most awarded production company during Cannes 2019 was Park Pictures. Hungry Man US, Somesuch UK, Buck US and Biscuit US were also high in the rankings. Wieden + Kennedy Portland won the Agency of the Year, while Network of the Year went to McCann Worldgroup.

Campaign has reported a 24% drop in Cannes Lions awarded to UK creative agencies, with the US shops dominating the awards. AMV BBDO was the most awarded UK agency, who put out campaigns such as Viva la Vulva for Libresse / Body Form Glass over the past year. The campaign, which features cupcakes, coin purses and shells lip-sinking to an empowering song was praised by the Titanium Lions panel for “killing a 3000 year old taboo”. The spot also took home the Glass Lion for Change. Directed by Kim Gehrig with production company Somesuch & Co. 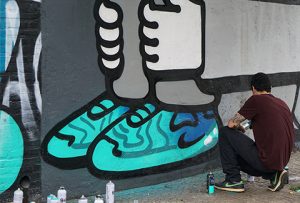 Throughout the week, creative work coming out of Brazil was also well recognised. A Nike Campaign by digital agency AKQA Sao Paulo won the Media Grand Prix. Drawing on the city’s vibrant graffiti culture, leading artists were asked to add Nike trainers to their work. Using geotagging technology, sneakerheads were able to unlock and buy exclusive trainers just by visiting the murals. During the campaign, Sao Paulo’s mayor was sentenced for erasing cultural heritage after he covered some of the city’s famous graffiti in pursuit of his “pretty city” campaign. Spurred on by this, Nike commissioned the city’s artists to bring back six colourful characters to the Sao Paulo's  streets who had been erased, this time with new Nike trainers. Also from AKQA, a short film produced by Stink Films from Brazilian rapper Baco Exo o Blues won a grand Prix in the Entertainment Lions for Music.

Looking forward, integrating with newer mediums such as gaming is becoming increasingly important. Wendy’s Keeping Fortnite Fresh campaign saw the brand infiltrate video game Fortnite through an in-game event positing a food fight event between team pizza and team burger. The fast food brand took issue with the fact that burgers were being kept in freezers in Fortnite, and using the opening to engage with key youth demographics. Via streaming platform Twitch, Wendy's invited their social media followers to join them in destroying the burger freezers in the game. AdAge reported that jury chair PJ Pereira explained that the campaign “was setting up a trend instead of being the apex of a previous trend” adding that Wendy’s showed something that made us wonder, five years from now, years from now, that we could go back and say, ‘Maybe it started here”.

Lastly, sustainability was a hot topic over the week. Not only did Extinction Rebellion stage a protest, but the issue was more prominent in many campaigns. Mars Australia won the Lion for sustainable development goals with their Lion’s Share campaign. The campaign drew on the fact that twenty percent of all advertisements feature animals. Back by the UN development program and fronted by David Attenborough the campaign asks brands to commit 0.5% of media spend in advertisements featuring animals to the Lion’s Share trust which will be use to protect animals in danger. They estimate that if the top ten advertisers in the world signed up to the pledge, a US47 million dollars will be generated.