Written by Shona Smith on Jun 10, 2019. Posted in General Interest / On Location 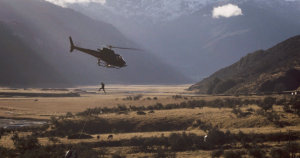 Woody and Wayne, two of Central Otago’s most trusted mountain and river health and safety guides discuss the spectacle and dangers involved in keeping film crews safe in such dramatic natural environments. As they divulge some behind the scenes tales, Woody and Wayne chat about the riskas and rewards of their work with local producer Jozef Fityus.

As discussed in the video, the dramatic Central Otago region is both incredible and fast changing, with a range of ecosystems contained in a small area. Director Perry Bradley comments, “when you’re up in some of these places, you’d be very glad to have Woody and Wayne by your side”.

The short film series sees filmmakers talking to filmmakers as producers at New Zealand’s Film Construction discuss aspects of the job with local service providers. The series also has a website.

Created and Produced By Film Construction