Written by Shona Smith on Jun 3, 2019. Posted in Production News

Principal production has begun on Normal People, a screen adaptation of the award-winning novel by Irish writer Sally Rooney for the BBC and Hulu. The series consists of twelve, half hour long episodes and production is taking place between Sligo, on the west coast of Ireland, Dublin and Italy. 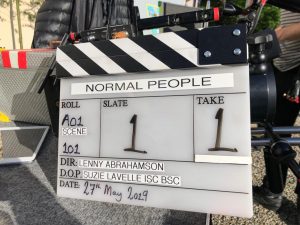 The story revolves around the relationship of Marianne and Connell from the end of their school days in small-town west of Ireland to their undergraduate years at Trinity College in Dublin. Sligo, a town on the north west coast of Ireland will see a portion of the production, as will Dublin, on the east coast. Italy will also host filming for the project.

Element Pictures (The Favourite, The Lobster) are producing the series for BBC Three in partnership with Hulu. Due for release in 2020, the series will premiere on BBC Three, going on to air on BBC One and streaming platform Hulu.

The BBC describes the work as “honest, smart and intoxicating, Normal People sees the pair weave in and out of each other’s lives and explores just how complicated intimacy and young love can be”.

The producers have also revealed rising talents Daisy Edgar-Jones (Gentleman Jack, War of the Worlds) and Paul Mescal (Bump) will star in the drama as Marianne and Connell. Joining the cast are Sarah Greene (Dublin Murders, Rosie) and Aislín McGuckin  (Outlander, The Nephew) as well as young acting talent from the UK and Ireland.

Directing duties will be shared between Lenny Abrahamson (Room, The Little Stranger) and Hettie McDonald (Howard’s End). Abrahamson, who is also an executive producer for the series, commented “It’s also lovely for me to be shooting in Ireland again and telling an Irish story after shooting abroad. The film and TV industry here is full of talented and committed people who can stand shoulder to shoulder with the best in the world”.

The series is based on the novel of the same title by Sally Rooney which was longlisted for the Man Booker Prize in 2018, won 2019’s Book of the Year at the British Book Awards and entered the New York Times bestseller list at #3. Rooney has adapted the novel for TV alongside writers Alice Birch and Mark O’Rowe.

The Republic of Ireland provides a 32% tax credit for film and television production. There is no annual cap and international cast and crew working in Ireland qualify as expenditure. A per project cap sits at EUR70 million. An additional 5% uplift is available for projects shooting in ‘the regions’ -areas outside of Dublin and Wicklow Counties, and Cork City and County.

Italy also has rebate in place that provides 25% tax credit for foreign or co-productions. At least 60% of the film must be shot in the region to qualify. Productions are also exempt for a 20% VAT and Sales Tax.