Written by Shona Smith on Jul 26, 2019. Posted in General Interest

Leeds city council has announced it will inject GBP1.6 million into a former print works site to turn the space into a TV and film studio complex in what has been called a “game-changing moment” for the city’s production sector. 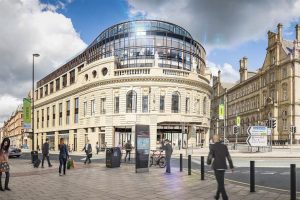 The announcement comes as Channel 4 readies itself to move into new headquarters in Leeds this autumn.  The new complex, at the former Polestar Petty print works on Whitehall Road is a five minute drive from Channel 4’s new HQ at The Majestic in the city centre (pictured). The 70,000 square foot site is expected to house up to six new studios.

Leeds City Council will lease the building, subletting it to Versa Studios while the studio will be owned and operated by Prime Studios, who already operate a four-soundstage studio in the city where Hope Gap, BBC One’s The ABC Murders and ITV’s Girlfriends have all been based.

Councillor Judith Blake, leader of Leeds City Council said, “This investment is a game-changing moment for the film and TV sector in Leeds. The sector has expanded significantly in recent years, so there is a real demand for more studio space to allow the industry to grow. The council is supporting this by bringing forward a number of new facilities such as the Engine House and the new studio”. 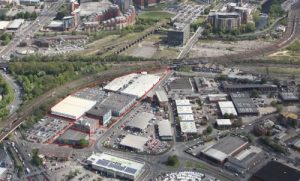 Earlier this week, the National Film TV School also announced this week that a hub will open in Leeds. The school notes that “Yorkshire based screen industries are growing faster than anywhere else in the UK”, at a rate of 88% against a UK average of 32%. Expected to open in January 2020, the hub will provide specialist training to meet the growing needs of film and television production in the city and specifically work to address gaps in existing provision by delivering courses other providers aren’t currently offering in the area.