After a freak accident during a blackout, struggling singer-songwriter Jack Malik (Himash Patel) finds himself in a world where the Beatles never existed. Taking the opportunity to bring the famous band’s music to audiences, the film sees Himesh propel his career from his home in Suffolk, UK to the hub of the entertainment industry that is LA. The Beatles' hometown of Liverpool, a city which inspired many of their hits also makes an appearance in the film.

The production spent nine days shooting in Suffolk and additional days in Norfolk,  estimated to have brought upwards of GBP100,000 spend to the local economy. Jim Horsfield, operations and business development manager at Screen Suffolk noted "it was filmed all the way through the really hot period in the summer, so it's going to look absolutely stunning, it's going to bring tourism to the county when people see it”. Rachel Aldridge, operations and business development manager at Screen Suffolk added, "There was very little in the way of set-dressing, it's present day. There were loads of local people, the extras were local people - that's going to be really lovely for them to see".

As well as the panoramic shots of the county, the other prominent stops included Halesworth High Street, Shingle Street (pictured above), Lowestoft and Dunwich (pictured below) - the location for star Lily James’ (War & Peace, The Guernsey Literary and Potato Peel Pie Society) character Ellie's cottage. 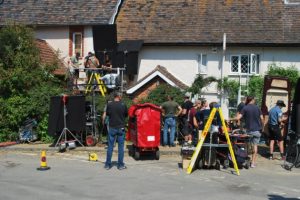 Location supervisor Camilla Stephenson found locations capturing a sense of realism that director Danny Boyle was looking for. “Danny was very clear, from my first meeting with him, that he didn’t want ‘chocolate-box’ locations,” Stephenson says, “But he wanted to be true to the script, so we started looking at places on the east coast that had a harder edge—working docks, factory HQs. By choosing Gorleston, we’ve got an Edwardian seaside town that’s charming but also has a real edge with very busy working docks. He wanted it real but didn’t want it gritty. He absolutely didn’t want anything grim. Danny wanted to see the beauty, but not the quaint, English village prettiness.”

Danny Boyle noted that “much of the story is set in the more rural areas of Suffolk…there are very beautiful beaches around there, but they’re not just picturesque; they feel a bit more interesting than that to me”. “I wanted to drag it more toward the towns, like Lowestoft in Suffolk and Gorleston in Norfolk, just south of Great Yarmouth. These amazing towns are a bit forgotten, really. Gorleston’s got an amazing history. It was huge in Edwardian times, like Brighton. It was the place. Yet, it’s fallen off the radar.”

Richard Curtis, who wrote the screen play and was very involved in the filming commented that "the great thing about Suffolk is that once you arrive here you are in a beautiful easily controllable environment," he said. "There's so many lovely places and people, everybody's happy and they don't go off to their wild lives and distractions of London. If you're making a move about England, you can find everything you want and more here."

Scenes were also shot at Latitude, a Suffolk-based music festival. “they did a lot of drone shots as they are going to the festival, so again that's going to be big sweeping landscapes in glorious weather" says Horsfield. 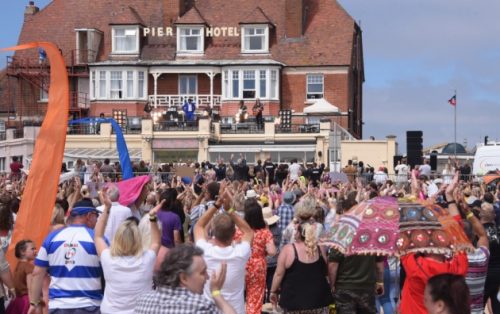 Two crucial scenes take place at the Pier Hotel on the beach at Gorleston-on-Sea that emphasize Malik’s rise to stardom. In a flashback scene that takes place before his accident, Jack and Ellie show up at the Pier Hotel for a gig, only to discover that it has been closed for three months and doesn’t get to perform at all. One year on, “he’s suddenly the most successful person in history" says Curtis, "we decided we’d have him perform on the other side of the hotel on this balcony looking over this beach. He’s never had a crowd of more than 17 people, and suddenly he’s got a crowd of 5,000 people. We also loved the idea of it being on the roof because there’s the reference to The Beatles playing on the roof of Apple when they played ‘Get Back’ and ‘Don’t Let Me Down’”.

In the film, Malik visits Liverpool on the eve of his album debut to try and connect with the spirit of the Beatles in their own hometown. As Boyle puts it, “it felt right to return to Liverpool to film it in a way that made it look as though The Beatles had never existed. That’s tough in Liverpool because they’re very proud of The Beatles. We did have to do a bit of digital erasing!”. The production shot in Penny Lane as well as the Mersey Tunnel. 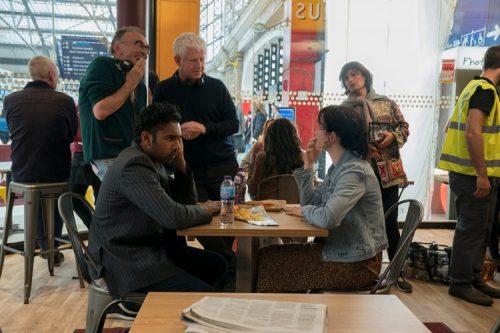 In LA, California, production lasted for seven days. Curtis recalls “it was unbelievably hot, we’d been down to Venice Beach, the Pacific Highway and the palm trees, The Beverly Hills Hotel and Sunset Boulevard. A definitive L.A. day. It was 40 degrees Celcius and we’d been shooting a taxi with a Russian Arm, so, we had been in a car in a heat storm”.

Other LA locations included the Cooper Wave Hotel, which production designer Patrick Rolfe notes takes on particular emotional resonance in the film. “The stunning Cooper Wave House, on Malibu Beach, comes to symbolize the radical turn Jack’s life has taken” he explains, “at the start of the film, Jack and Ellie are walking down Frinton-on-Sea Beach in Essex, with its classic, British beach huts on stilts,” production designer Patrick Rolfe says. “Suddenly, in Malibu, Jack’s faced with these amazing houses on stilts. We’re showing how much his world has turned upside down”.

The UK has a 25% cash rebate to productions that are intended for theatrical release and meet a minimum UK core spend of 10%.