Written by Shona Smith on Jul 31, 2019. Posted in Production News

Mammoth Screen's The Pale Horse currently filming in and around Bristol

Currently being filmed in Bristol, The Pale Horse is the fifth adaptation of Agatha Christie novel by writer Sarah Phelps for BBC One.

The Pale Horse follows Mark Easterbrook as he tries to uncover the mystery of a list of names found in the shoe of a dead woman. His investigation leads him to the peculiar village of Much Deeping, and The Pale Horse, the home of a trio of rumoured witches. Word has it that the witches can do away with wealthy relatives by means of the dark arts, but as the bodies mount up, Mark is certain there has to be a rational explanation.

Currently filming in and around the Bristol area, Bristol Film Office is supporting the production which is headquartered at The Bottle Yard Studios.

Helen Ziegler, Executive Producer for Mammoth Screen notes, "Sarah Phelps has excelled herself with her fifth adaptation of Agatha Christie’s work. The Pale Horse is a stunningly atmospheric, bewitching and thrilling piece, which has attracted the most wonderful stellar cast. We are utterly thrilled to see Sarah’s brilliant writing be brought to life by director Leonora Lonsdale, the fantastic production team and incredible cast". 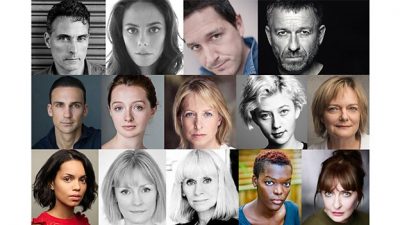 James Prichard, Executive Producer and CEO of Agatha Christie Limited, says: “This adaptation feels like nothing we have done before. This is a very different story from most that my great grandmother wrote, and Sarah has taken it to new heights. The cast, with the likes of Rufus Sewell and Bertie Carvel, is superlative, and it should be a highly entertaining drama".

Leonora Lonsdale (Beast) is directing the series and Ado Yoshizaki Cassuto (City of Tiny Lights) in producing. The Pale Horse is a Mammoth Screen and Agatha Christie Limited drama for BBC One. The executive producers are Sarah Phelps, Damien Timmer and Helen Ziegler for Mammoth Screen, James Prichard and Basi Akpabio for Agatha Christie Limited and Tommy Bulfin for BBC.

Amazon Prime Video is the US co-production partner and Endeavor Content will handle sales in all territories internationally.