Written by Murray Ashton on Jul 16, 2019. Posted in Interviews

On location in the Dominican Republic with Film Commissioner Yvette Marichal

I received my master’s degree from Boston University in Broadcast Journalism, focusing in documentary filmmaking and broadcast news. I worked in local television, theatre, radio and print media as a producer, presenter, actress and editor for over 20 years. 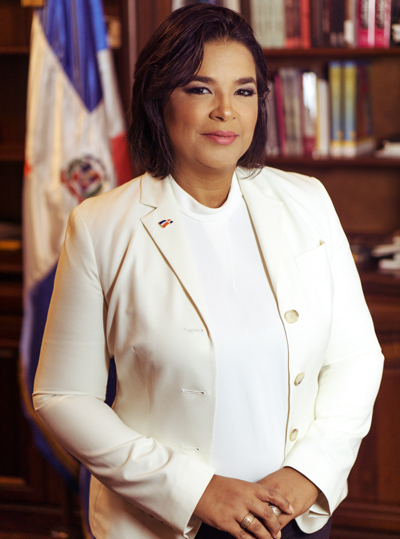 As Film Commissioner of the Dominican Republic I head the team that is responsible for promoting and regulating the audiovisual industry in our country. I enjoy most the fact that, thanks to our film bill and the incentives it offers, we have a thriving industry. As reflected in the 22nd edition of the Cannes Film Festival Marché du Film publication, Focus, which is commissioned by the European Audiovisual Observatory, the Dominican Republic is the leading Ibero-American country in national market share.

We hosted over 86 audiovisual productions from all over the world in 2018. Seven colleges and universities now have film schools (compared to just one eight years ago). In the last two years, Dominican films have received over 40 international awards in numerous film festivals, such as Locarno, Toronto and Guadalajara.

Location: Botanical Garden - Photo Property of the Ministry of Tourism of the Dominican Republic

What can you tell us about the Dominican Republic as a filming destination?

Our country is very rich in varied ecosystems, which makes us a competitive film destination. We have the most beautiful beaches in the Caribbean, and we have mountains where you can experience weather below 10 degree celsius. On our island, you will find deserts, ancient caves with taino art engraves on them, amazing lakes, rivers with huge waterfalls, big cities and much more.

"There are currently over 5,000 professionals registered at the film commission."

In addition to all these different locations we have over 3,000 highly qualified crew. During high season we have hosted up to seven foreign and local production shoots simultaneously. We have three major studios; Pinewood Studios with huge and fully equipped sound stages and the biggest water tank in the Caribbean and we have two more, one in our capital city, Santo Domingo and another one minutes away from the city with huge space where you can recreate a rural area or countryside. In addition to all these we have several rental houses fully equipped with the state of the art equipment from the world market.

There are currently over 5,000 professionals registered at the film commission. These professionals participate in over 6,000 activities in our audiovisual industry. Thus, we’ve been a preferred film destination of major productions for Paramount Pictures, Netflix, the BBC, Sony Pictures, among other major studios.

Location: Alcazar Colon - Photo Property of the Ministry of Tourism of the Dominican Republic

What locations are most commonly used by foreign film and TV productions when they come and film in the Dominican Republic?

Our beautiful and exotic beaches, our film studios and the old colonial part of our capital city, Santo Domingo.

What are the more unusual locations that the Dominican Republic has to offer?

Our impressive mountains and deserts, our many different rural areas and country side, our roads that go through mountains and beaches at the same time, our caves and our waterfalls.

We have a huge lake called Lago Enriquillo which is the largest natural water reserve in the Dominican Republic and all the Antilles. It has an area of 265 sqkm and is located in a really dry climate area in the southwest part of our country. It is a surreal and beautiful place.

Location: Cayo Arena - Photo Property of the Ministry of Tourism of the Dominican Republic

What locations worldwide can the Dominican Republic easily double for?

We have doubled for Cuba and Puerto Rico several times for Miami Vice (Michael Mann), If Beale Street Could Talk (Barry Jenkins) and The Godfather Part 2 (Francis Ford Coppola) among others. We’ve doubled for Paris, New York and Buenos Aires in a local production called Rubirosa – a movie that recreates the life of Porfirio Rubirosa, the world-famous Dominican playboy.

The old colonial part of Santo Domingo can double for Europe thanks to its architecture. We can double for many rural settings or any country with beautiful and exotic beaches. We can also double for any deserted part of the world or for any cosmopolitan city thanks to our capital city.

Location: Salto Bayaguana - Photo Property of the Ministry of Tourism of the Dominican Republic

What are the advantages of filming in the Dominican Republic?

Aside from our diversity of locations and our generous film incentives, the necessary paperwork and permits you need to shoot in our country are very simple and easy to issue through our film commission and in most cases you only need a tourist card to enter our country that costs less than USD15.

The film producers may benefit from a Transferable Tax Credit (CFT) equivalent to 25% of all expenses incurred in the Dominican Republic that are directly related to the pre-production, production and post-production stages of their films if the productions expenses in the country exceeds USD500,000. This incentive is available for films, TV films, TV series, music videos, reality shows, soap operas, documentaries and other audiovisual works.

In addition, we have a VAT Exemption, on all goods, services and / or leases directly related to the pre-production, production and post-production of cinematographic works; and temporary imports free of tariffs and taxes of equipment and consumable or non-consumable goods, necessary for filming. We suggest engaging the services of a local production company, if you want to benefit from the incentives.

Location: Isla Saona - Photo Property of the Ministry of Tourism of the Dominican Republic

How many incoming production “location shoot days” did the Dominican Republic record for 2018?

In 2018 the Dominican Republic had 608 “location shoot days” of incoming foreign production. In 2018 we had eight projects that came to shoot in our country that applied for our transferable tax credit and we had 46 projects that came to shoot in the Dominican Republic attracted by our country as a film destination and did not apply to any incentive of our film law.

One of these eight projects was the reality TV show Survivor. It’s been filming in the Dominican Republic for six years and airs in Romania, Mexico, Turkey, Greece, Brazil, Colombia and the USA.

Exatlón is also shot here, making use of our beaches and mountains of the northeast part of the country.

What other stats or economic impact data can you let us have about incoming productions filming in the Dominican Republic?

Between 2011 to 2018 foreign investment in the Dominican Republic via the film industry has added over DOP5,732 million to our economy, that’s about USD114.5. This is very important for our economy and for our country as a whole.

Thank you Yvette, it has been great talking to you.