Amazon’s fantasy drama Carnival Row filmed over a hundred days in the Czech Republic, with sets for the Victorian fantasy built at Barrandov Studios in Prague. 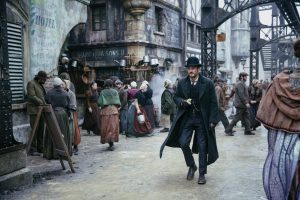 The fantasy drama sees Orlando Bloom (Pirates of the Caribbean) and Cara Delevinge (Suicide Squad) star as Rycroft Philostrate, a human detective and Vignette Stonemoss, a refugee faerie who rekindle a dangerous affair against the backdrop of an increasingly intolerant society. The Victorian fantasy world in which they live is filled with mythological immigrant creatures, driven from their exotic homelands by the empires of men. As this growing population struggle to coexist, Philos starts work on his most important case yet.

Carnival Row is an eight-part hour-long series from Amazon Studios and Legendary Television, with executive producers Marc Guggenheim (Arrow, Eli Stone), René Echevarria (Star Trek, Castle), Jon Amiel (Outsiders), Bloom, and Travis Beacham (Pacific Rim, Clash of the Titans). Beacham’s “A Killing on Carnival Row,” on which the project is based, appeared on the very first installment of the Hollywood Blacklist in 2005. 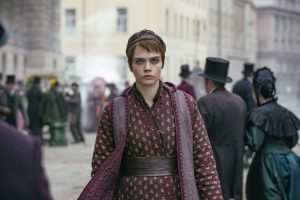 Shooting for five months between October 2017 and March 2018, the series was one of the costliest productions to have shot in the Czech Republic since production incentives were introduced. State Cinematography Fund director Helena Bezděk Fraňková noted that the domestic spend in the Czech Republic was over 1.5 billion, and the project was allocated more than 261 million in rebates.

Two main units were involved in filming over the one hundred and eight day shoot. Around nine hundred people worked on the series, less than 10% of which were foreign professionals. Pre-production took five months, starting in May 2017 as the series needed extensive sets built. “We filmed about 60% on sets – the fictional Victorian town was built on the Barrandov Studio back lot, and we had several decorations in stages. We employed some 400 craftspeople and artisans on their construction” notes David Minkowski, from Stillking Films who worked on the series. 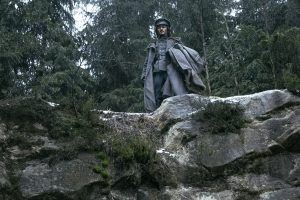 Outside of the capital, Prachov Rocks in Liberec and two chateaux's in Frýdlant and Krnsko to the north of the country welcomed on location filming.

Ahead of the premiere of Carnival Row, Amazon Studios has greenlit a second series, suggesting that more filming could take place in the country.

The Czech Film Industry Support Programme provides a 20% rebate on qualifying Czech spend to film and TV projects, as well as post-production. There is no cap on per-project grants, and no sunset date on the program.

The Czech Film Commission will be exhibiting at FOCUS the meeting place for international production in London on the 3rd & 4th of December. Click here to receive your free delegate badge.