Written by Shona Smith on Aug 29, 2019. Posted in Awards and Festivals

Running for twelve days from the second to the thirteenth of October the 2019 BFI London Film Festival will present two-hundred and twenty-nine films that celebrate the diverse landscape of international cinema.

The programme shows both home-grown cinema and international projects, with seventy-eight countries represented across short films and features. Amanda Nevill, CEO , BFI said “At this moment when the UK is adapting and reshaping our place in the world, the BFI London Film Festival really underlines the soft power of the art of film and showcases the dynamism of global exchange and partnership”.

Tricia Tuttle, BFI London Film Festival Director also noted that the “continuing and welcome trend of increased gender balance in directing talent behind short film, first and second features” is one of the key talking points from the 2019 programme. Out of the two-hundred and twenty-nine films screened at the festival, 40% are directed or co-directed by women. 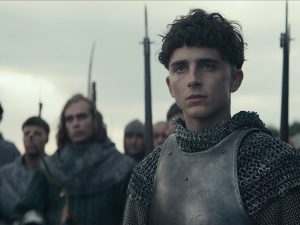 Highlights of the line-up include opening night gala The personal History of David Copperfield, directed by Armando Iannucci. Billed as a fresh take on the classic novel from Charles Dickens and stars Dev Patel, Tilda Swinton, Hugh Laurie, Peter Capaldi among others. Martin Scorsese’s The Irishman which stars Robert De Niro, Al Pacino and Joe Pesci will close the festival.

Other headline galas include Michael Winterbottom’s Greed which stars Steve Coogan which filmed in Greece in 2018, The King (pictured) starring Timothee Chalamet as Henry V and Taika Waititi’s Jojo Rabbit, about the member of the Hitler Youth who’s closest friend is an imaginary Adolf Hitler.