Written by Shona Smith on Aug 15, 2019. Posted in Production News

Principal photography has begun in New Mexico for the second series of Warner Bros. Television’s Roswell.

The shoot is expected to last until January 2020, employing two hundred and sixty New Mexico crew members. Over two-thousand five-hundred state residents will take on extra and background roles during the production.

Based on the Roswell High series of books by Melinda Metz, the plot concerns the daughter of undocumented immigrants who discovers, when returning to her hometown of Roswell, New Mexico, that her teen crush who has grown up to be a police officer is an alien who has kept his abilities secret his whole life. As the two reconnect, they begin to investigate his origins until a violent attack and long-standing government cover-up point to a greater alien presence on Earth.

Locations around the state to be used by the production include state capital Santa Fe, Albuquerque as well the smaller towns of Las Vegas and Madrid.

Metz’s novels were previously turned into a series for WB that ran for three series between 1999 and 2002. However, filming took place entirely in California.

Seventeen years on, the Roswell reboot joins a long list of TV and film productions who base their shoots in New Mexico. Netflix shoot a large number of productions across the state such as Better Call Saul and The Ballad of Buster Scruggs while NBCUniversal have recently announced plans to redevelop a warehouse into a studio from which they aim to spend at least USD500 million in direct production costs over the next ten years. 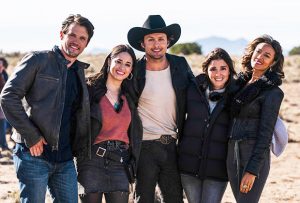 New Mexico have recently doubled the annual budget for the 25-30% Film Production Tax Rebate in response to increasing demand. Productions that can qualify are wide ranging, from feature and independent films to music videos, certain commercials, animation and video games. The base rate of 25% applies to total qualifying expenditure, but an additional 5% is available for certain qualifying projects depending on their New Mexico budgets. For instance, a TV series with an order of six episodes based and a minimum of GBP50,000 per episode, feature films that utilise the premises of a qualifying production facility or stages, or those that shoot in rural area can qualify for the additional 5%.