Written by Shona Smith on Sep 3, 2019. Posted in General Interest

The MOU (Memorandum of Understanding) signed during the 26th venice International Film Festival seeks to recognise and enhance the creative and business links London has with Apulia and Sardinia, and extend and enrich the long term partnerships with both agencies.

Adrian Wootton OBE, Chief Executive of Film London and the British Film Commission, said: “The aim of the Venice International Film Festival is to raise awareness and promote cinema in all of its forms, as art, entertainment and as an industry, in a spirit of freedom and dialogue - so what better time to recognise the relationships that London holds with Apulia and Sardinia? Film London is committed to sustaining and developing European partnerships in a variety of exciting and diverse ways, and over the next year I look forward to working with both regions on a range of new projects from supporting the development of talent and providing access to finance through our Production Finance Market, to inspiring artist filmmakers through residencies and cultural exchange”. 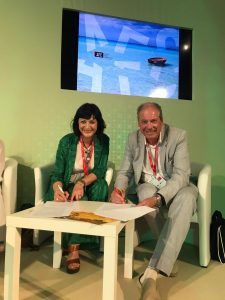 The MOU between Film London and Fondazione Sardegna Film Commission, which was signed on 31 August 2019, will explore opportunities for collaboration and promotion across both regions and builds on existing collaboration between the regions. Opprtunities include shared learning and exchange of artists’ best practices through Film London’s Artists’ Moving Image Network (FLAMIN), talent development through Film London’s Production Finance Market (PFM) and its new talent strand, exchange of sustainable filming practices, promotion of diversity and inclusion, and shared learning in screen tourism.

Earlier this year artists from the FLAMIN Fellowship scheme participated in an innovative 3-week art residency in the town of Nuoro, Sardinia. The opportunity offered the artists a chance to foster international contacts and develop new ideas inspired by Sardinia’s distinct culture and ancient traditions. The next part of this exchange will see artists from Sardinia take up a residency in London.

The agreement between Film London and Apulia Film Commission was signed on Sunday 1st September and seeks to develop, support and promote the emerging talent of their respective regions, providing opportunities for access to finance, skills and valuable business support in the sector. The agreement also aims to foster screen tourism and this will include Apulia Film Commission participating and partnering Film London’s International Screen Tourism Conference on 29 November 2019 as a key sponsor. The conference will see experts from across Europe meeting to explore the intersecting worlds of film, television and tourism, examining the huge economic and promotional benefits provided by screen tourism to destinations and visitor attractions.

Film London will feature during the packed content programme featuring over 150 experts at FOCUS the meeting place for international production in London on the 3rd & 4th of December. Click here to receive your free delegate badge.