Written by Shona Smith on Sep 13, 2019. Posted in General Interest

Best Practice in Screen Sector Development is an extensive analysis of strategies and policies used by governments across the globe to maximise their share of the high-value screen production market. 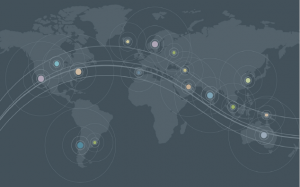 Leon Forde, associate director of Olsberg•SPI commented that the “timely project” “underlines the fact that a successful production market is a cohesive ecosystem”.

The study launched at AFCI’s 43rd Cineposium Conference in St Petersberg, Russia. AFCI President Jess Conoplia notes that “AFCI’s role as the only global organization bringing together film commissions and industry is to inform on best practice, and this report serves as a roadmap. The need is especially critical now, as an increasing number of territories acknowledge the importance of the screen sector.”

As governments around the world increasingly recognise the screen sectors ability to drive economic development, the report analyses the strategic methods to build competitive sectors.

Best formal practices in areas such as legislation, strategy, funding and other forms of support were assessed. The report also considers informal processes and procedures that reduce friction or difficulty for filmmakers across the production process. These include permitting systems for location filming and customs and visa procedures for equipment and workers”.

Forde notes that “governments and other stakeholders must develop stable and effective policies and interventions across all of these areas to ensure maximum production activity from national and international projects”.

Case studies included in the report cover twenty jurisdictions across Asia and Oceania, Canada, Europe, Latin America, The Middle East and North Africa and the US.