Written by Shona Smith on Sep 3, 2019. Posted in On Location

Filmed around Bristol and the South West, ITV's Sandition were looking for locations to provide spectacular landscapes that complement the period drama's ostentatious interior sets. 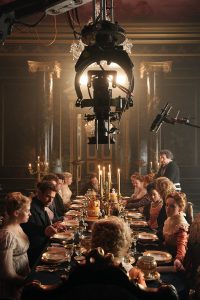 The drama, produced by Red Planet Pictures for ITV is based on a book written by Jane Austen only months before her death in 1817. Sanditon follows the impulsive, spirited and unconventional Charlotte Heywood and her spiky relationship with the humorous, charming Sidney Parker. When a chance accident transports Charlotte from her rural hometown the coastal resort of the Sanditon, Charlotte is exposed to the intrigues and dalliances of a seaside town on the make, and the characters whose fortunes depend on its commercial success transporting viewers from the West Indies to the rotting alleys of London.

Director Olly Blackburn, who is represented commercially by Great Guns, and has experience in directing period dramas such as Victoria explains “the feel for the world in Sanditon was Regency England, but Regency England with a twist. We felt that you’ve seen this period of history so many times in so many Jane Austen adaptations that we wanted to do something that was a little different, a little surprising, but still true to the period. A lot of Jane Austens novels are set in the country, not in the city. In her final book she was exploring different places, in particular this town of Sanditon. We used that as kind of license to create a more cosmopolitan, brash Regency world.” 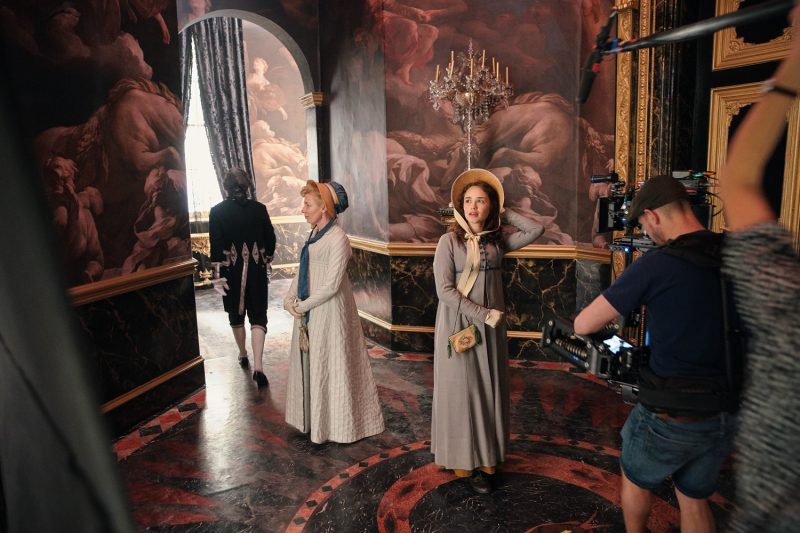 To achieve this, the production built five interior sets at Bristol’s Bottle Yard Studios, as well as an 1820s street set was built in the backlot. Sanditon House is based on the height of Chatsworth House’s main hallway with a black marble finish inspired by the Bond film Thunderball. Production Designer Grant Montgomery explains “it has three fully working chandeliers that were lowered and lit on each day of filming, each taking up to 300 candles of different colours which were made especially for the show. One of the main features of this giant room is the lifesize statue of a gold Neptune rising out of the waves on four horses, which was specially sculpted for the series. Attention to detail has been important right down to the handmade moulded columns and applied ceiling designs in Trafalgar House that match the John Soames museum upon which it’s inspired. All of the elaborate curtain designs, wall coverings and murals were handmade specially for the series”.

The exterior street was used for the town of Sanditon, and transformed into a dock area for London’s Cheapside. Montgomery summarises “All in all it’s a 360° world that reflects a frontier western Deadwood style meets ‘Georgian superpower’”. Built alongside the interiors, the sets took ten weeks to construct “despite high winds, snow and buckets of rain!”. The production shot a number of scenes on location with the support of the Bristol Film Office and Bath Film Office. With vast experience shooting period dramas across the country, Blackburn notes that Bristol provided the locations - both landscapes and exteriors vital for a period production. “Because we had so much that was interior on these built sets, that meant that when we went outside we wanted the most beautiful, spectacular, wild landscape possible to counterpoint all those interiors”. “To help protect our budget, I really really wanted to make sure we didn’t do any overnights so we kept within our production zone in Bristol”. “There’s really spectacular landscapes pretty close to the city that we shot in. Places like Brean Beach, Berrow Beach, Sand Point, a lot of them are national heritage locations”. Alex Protherough, Head of Production, Red Planet Pictures added "the Bottle Yard Studios are perfectly located to access these locations, and they have more to offer. Sanditon was always going to require an element of set building, as is often the case with continuing drama productions of this size. The construction and studio spaces at the Bottle Yard have made Bristol the obvious place to base".

Sanditon is a Red Planet Pictures production commissioned for ITV by Polly Hill and Masterpiece by Rebecca Eaton. Created by Jane Austen, it is written and executive produced by Andrew Davies with Belinda Campbell as Executive Producer for Red Planet Pictures and Rebecca Eaton as Executive Producer for Masterpiece. Series producer is Georgina Lowe, and casting director is Jill Trevellick.  BBC Studios is distributing the series internationally.