Written by Shona Smith on Sep 5, 2019. Posted in On Location

In June, Poznan Film Commission and Warsaw-based production services provider Filming Land, alongside the Polish Tourism Organisation and Mazovia Film Commission hosted a group of UK based producers for a three-day familiarisation trip. With the introduction of a 30% Polish cash rebate scheme in February, the tour combined a scouting trip with detailed information on how producers could benefit from the new rebate.

Our itinerary took us around the colourful and historic city of Poznan, as well as to Poand's sprawling capital Warsaw. I joined producers from London based See Saw Films, Glasgow’s Synchronicity Films, and independent producers from Northern Ireland and the UK to document the trip for The Location Guide.

Flying directly to Poznań city airport, where flights from the across the UK and Europe regularly touch down, we were greeted by Michał Ferlak of the Poznań Film Commission, and Agnieszka Pająk, lead producer at Filming Land. 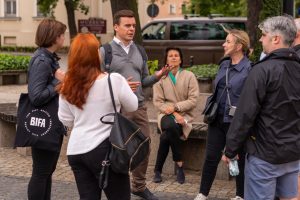 Located in the central-western region of Poland – around three hours west of Warsaw, and three hours east of Berlin - Poznań is Poland’s fifth largest city. However the city's boasts one of the highest GDP’s per capita in the country, evident in the city’s well-groomed streets. One of the driving forces behind this strong economy is the international conference industry, a fact which holds unexpected benefits to incoming productions. Not only is the city well connected for international visitors, and the size and standard of accommodation befits business clientele, but when compared to tourist hot-spots, the summer period is Poznań's low-season meaning both accommodation prices and crowds are modest. Like most Polish cities, Poznań has its own filming office, as well as a regional film fund that is operated on a first-come-first serve basis. Furthermore, its annual budget of PLN80,000 is set to rise in 2020. 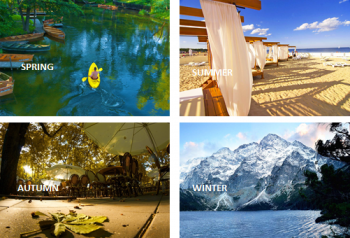 On a national level, the introduction of a 30% cash rebate in February 2019, international producers should take note of the opportunities available in Poland. In addition to the variety of locations on offer – (pictured left) including but not limited to a small desert, frozen lakes, dependable snow in winter, historic cities that have doubled for Berlin and blossoming countryside that has doubled for Japan. It would be unfair to class the country as a developing film hub; there is a good depth of crew, production facilities, equipment and services already found in the country. The major filming hubs of Warsaw, Lodz and Wroclaw are where the main studios are mostly based. However, when compared to similar countries with respectable infrastructure, crew and facilities still come at a favorable rate.  In terms of output, the Polish film industry currently generates around twenty international co-productions annually, while commercial sector has an annual EUR100 million turnover, around 15% of which are international TVC’s. After this brief introduction, we were led around some typical locations that Poznań can provide. The first stop was the city’s magistrates court, a twentieth century building with large stained-glass windows and two storied atrium style hall. The building is an example of the kind of public buildings that open for filming at low, or no cost whatsoever. Because they are public spaces, permitting fees are not always needed leaving productions solely obligated to cover running costs, such as electricity and janitors’ fees. 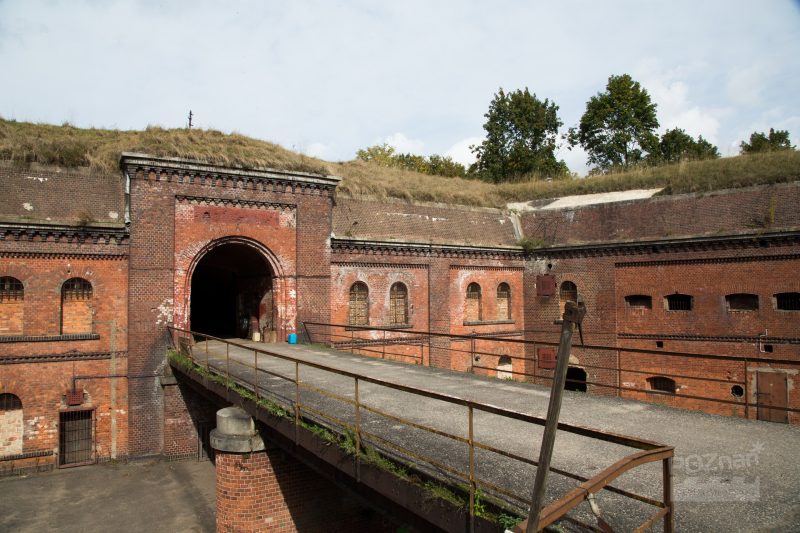 Later in the afternoon we explored Fort VI, the best preserved of the eighteen artillery forts that surround Poznań. Built by the Prussian military in 1883, the barracks here are large enough to house up to seven hundred men and a large dry moat surrounds the barracks. Covering a sizeable area, the producers agreed that one of the best uses for the space would be to build foreground sets, with the fort providing a backdrop. Brian Falconer commented “it is quite unique, and it sets the imagination to alight with possibilities” both in terms of “story and scale”. Owned and operated by the military until 2009, the site moved hands to a private owner who now uses the space for hosting events. Commercials and music videos for the likes of the band Genesis have previously used the space. The fort also has an armament collection, and we were informed that it is possible to use real military equipment on a film set in Poland. 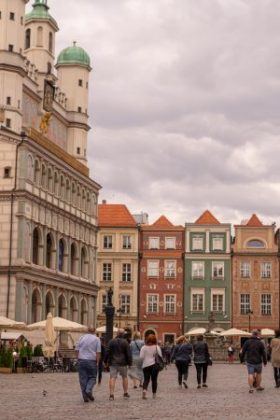 Back in Poznań city centre, we ventured into the colourful old town. At the heart of the city stands a cobblestone squre surrounded by buildings with immaculately patterned facades immediately reminiscent of the types of baroque squares that exist throughout central Europe. In 2017, Hindi thriller Mersal used the location to double for Paris. Although, to a European eye this might not be convincing, the large and elegant square is undeniably attractive and could conceivably double for Munich or Vienna. In the centre is a renaissance style town hall, now converted into a museum and a row of smaller, technicolour houses. On location filming would not be limited to the central square; the surrounded side streets all have similar baroque facades, which provides flexibility for shoots. The next morning we were guided through other historical aspects of the city. The first stop, the imperial castle, was another location that doubled for Paris in Mersal. Built in the early twentieth century the castle’s Romanesque style harks back to a medieval castle. During German occupation, the castle was rebuilt as Hitler’s official residence, and a large office was constructed. Unlike most other offices of the Third Reich Hitler never stepped foot inside meaning that the interior remains unchanged to this day. Designed much like the headquarters in Berlin, it remains in good condition and has recently undergone refurbishment. 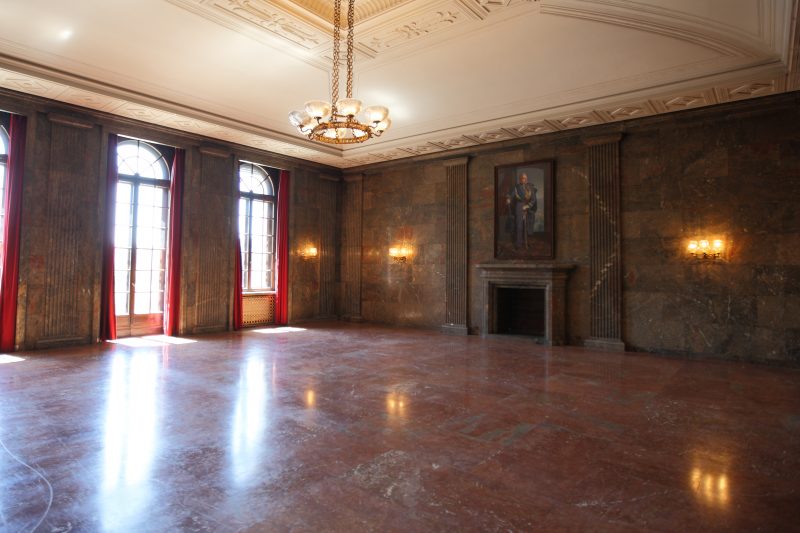 Around the vicinity of the castle is a district referred to as the emperor’s district, with a number of grand public buildings with neo-renaissance exteriors and interiors. The auditorium at the Adam Mickiewicz University, which can host around a thousand audience members, or the university’s main hall, as well as the municipal theatre are all examples of public buildings that have free permits. After the tour, See Saw’s Nicky Earnshaw commented “Poznań is an absolutely stunning town, and the fact that the public buildings in Poznań would all be free to use… I think is an interesting angle”. Our next stop was an atomic shelter slightly outside the city itself. Constructed at the apex of the Cold War for city’s mayor and staff in the event of a nuclear explosion, it was fortunately never needed. Undetectable from the street, the shelter was classified until 2004. The location retains working equipment telephone switchboards, a map room, an operating room and offices.

The next morning was an early start as we made the three-hour journey by road to Poland’s capital, Warsaw. The Masovia Warsaw Film Commission, who helps with the organisation of filming in the city and wider region were there to guide us around the city. Hosting around fifteen shoots every day, Warsaw is the busiest filming hub in the country. Due to its unique history, its architecture is a contrasting patchwork – ranging from renaissance style districts, to modern and soviet architecture.

Eighty-five percent of the city was destroyed during the second world war, only to be rebuilt in replica in the post-war era. As such, most of the Old Town has the feeling of a well-crafted, lived-in set. Looming over the city, the colossal Palace of Culture and Science is one of first structures you notice in the city centre. Constructed during the soviet era, with over three thousand rooms inside, both the exterior and interiors provide endless options for social realist backdrops. It’s likeness to New York’s empire state building did not go unnoticed, but additional Polish renaissance style elements are noticeable throughout. A popular filming location, the palace hosted filming for Hindi action feature Kick which saw Bollywood star Salman Khan perform a stunt sequence on its exterior.

Further into the city, we visited a number of buildings with impressive interiors. One such location was a private office block named Ufficio Primo – a striking black and white office block that impressed everyone in the group. With columns and arches that would work for any dystopian or utopian story. 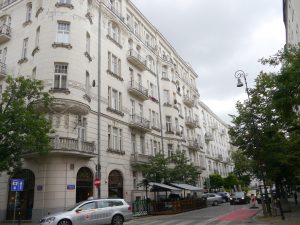 Between these buildings we walked through a number of contrasting neighbourhoods, all in close proximity.  Poznanska Street, or ‘Paris of the East’, is one of the best areas to double for the French capital in Warsaw. Constitution square, meanwhile, is one of Warsaw’s central square’s built by the soviets to host grand parades. Elsewhere in the capital streets still reveal evidence of the devastation of the 1944 Warsaw uprising, where bullet holes mark various exteriors. Elsewhere, the Praga district, a working-class area of town retains some of the most gritty urban environments to be found in Warsaw today. The Bazar Rozyckiego, once a hotbed for the black market, is a popular filming location for this reason and many traders continue to sell their wares in the market. It is in this neighbourhood that the Pianist found tenement blocks to feature in the period film. Today there remains a few blocks that have resisted gentrification but these too will disappear in the next couple of years. By contrast, Warsaw’s Palace on the Isle, a summer residence built for King Stanislaw is one of the most opulent settings in the city. Set in large grounds on a large lake, the building is a beautiful example of neoclassical architecture and works well for period shoots, such as that pictured below. Finally, we were given a quick tour of ATM Studios, one of Warsaw’s largest facilities. The modern studio has seven sound stages, as well as equipment rental services.

Many thanks to the organisers of the familiarisation trip, Filming Land & Poznań Film Commission. Partners of the trip were Polish Tourism Organisation, Poznań Local Tourist Organisation & the Mayor of Poznań.