Written by Shona Smith on Aug 10, 2020. Posted in Production News

The Universal Pictures feature is set to commence filming in the country by the end of August, followed by other high-end productions.

According to the Malta Film Commission, over one thousand crew members are expected to work on Jurassic World: Dominion during the shoot in Malta. Filming will take place in various locations including the capital city Valletta (pictured). 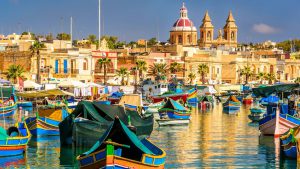 Original filming dates in the country had to be moved to August due to Coronavirus. The feature film restarted cameras at London's Pinewood studios on July 6.

The Malta Film Commission are collaborating with the Health Authority to ensure all safety precautions are kept with strict protocols.

Minister for Tourism Julia Farrugia Portelli noted that “the Malta Film Commission is expecting nine international productions during this year. Starting with Jurassic World: Dominion, nine other multimillion projects will follow with huge investment in our economy, creating more jobs to anyone working in the film industry in Malta”.

Film Commissioner Johann Grech stated that the Malta Film Commission had been "working hard to attract the Universal Pictures blockbuster since 2019. Our recently introduced incentives, the 40% cash-back for productions, serves as a key incentive to studios & film-makers to consider Malta film and TV productions".

In 2019, twenty-one productions shooting in the country generated EUR40 million into the Maltese economy. These included Camelot Films' The Obscure Life of the Duke of Corsica  starring Timothy Spall. Camelot are set to return to Malta for their upcoming genre feature described by producer Matt Hookings as “much more self-contained". Hookings adds "we’re looking forward to working with the local crew again”.

Malta provides cash rebates of up to 40% of eligible expenditure. Qualifying productions are required to pass a cultural test and present a detailed projection of the Malta budget. Feature film, TV films or series or mini-series, animation, creative documentary, transmedia and cross-media productions are eligible for the incentives.