Written by Shona Smith on Aug 26, 2020. Posted in General Interest

Created for producers by producers, poolhouse invites members to unite, inspire, and inform. Poolhouse allows creative producers from agency, production and post, along with supporting industry professionals to connect, educate, share opportunities, and offer an exchange of ideas around the art of production. 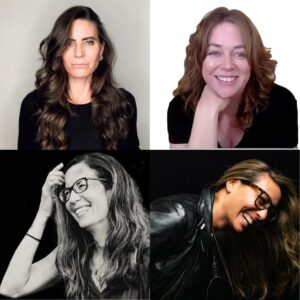 The member-based, globally inclusive platform was developed and launched by Veronica Beach, Pamala Buzick, Erin Sullivan and Jill Auerbach (pictured left)- respected producers with vast expertise who share a deep passion for the industry. Poolhouse’s first iteration was forged by the founders over a decade ago as an email user group for independent agency producers who rely on connections and trusted professional recommendations.

The new site harnesses this experience to address today’s production landscape. The founders conceived of an updated, robust solution where producers from all aspects of content creation can share resources and news by connecting in curated and private chat channels. For location professionals, there is a private Locations Scout Room, so locations scouts can chat to each other, as well as a “locations” chat so sider location discussions can take place or questions can be asked to location scouts. 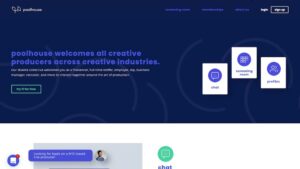 Covid hit after work on the platform had begun, but the platform has quickly become a practical resource for its members during this time. “During this urgent time, everything is chaotic and it is vital to have producers unite to keep the industry moving forward,” comments Veronica Beach. “We are problem solvers by nature and having one place for producers to come together for immediate, substantive communication is something our industry depends on, and where the poolhouse comes in.” 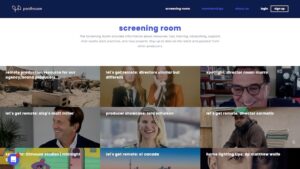 The pandemic’s impact on production, including shut-downs and swift changes region-by-region, safety protocols, and remote filming options, further intensified the founders’ efforts to bring the poolhouse to industry members around the world.

Beach adds “since the launch of the site, we’ve had jobs come in and out of the platform, many of those jobs have already been filled. Producers have asked questions from, “looking for recommendations in a specific genre of director for an upcoming project to rapid COVID-19 test site locations, to discussions around insurance for independent contractors, internship leads and of course, job leads.” It is, for sure taking a minute for producers to get used to asking questions, chatting with each other and so on, so one of the things we realized we needed to fix from day 1 was push notifications so that producers knew when questions were being asked or they were being replied to. Every day we have more members and every day producers feel bolder to talk to each other, these things take time but I promise you we are producing the heck out of this and as this is still in Beta Stage, when we get a bit farther over the next couple of months it will be rocking and rolling”.

While the team worked on the website’s design and UX, they did what producers do: harnessed their network to create video content aimed to inform, educate, and uplift producers. Available on poolhouse’s YouTube page and Instagram are nearly 100 videos featuring noted industry talent such as Henry-Alex Rubin, Candice Vernon, Calmatic, Aaron Stoller, Michael Di Girolamo and many more discussing such topics as the craft, mentoring, remote shooting, identity, and leadership.

The hope, say the founders, is that poolhouse can facilitate positive change as the production community examines issues of parity and diversity, while producing content effectively at the highest level. As Erin Sullivan explains, “One of our main goals is to help shape an equitable industry. We have an opportunity here to amplify voices that previously have not been heard and remaking the industry into a more just and equitable landscape.”

“We are excited to have producers join us on this journey to pave a path of virtual communication and cross-pollination as we move to reignite and reshape the industry,” notes Jill Auerbach. “It’s a consolidated platform for producers to connect in a timely manner, and our members are integral to its development with participation and feedback as we evolve together.”

Producers who join poolhouse receive a month free if they join in August. The member rate is $9.99 / month thereafter, an accessible fee to help support the growing platform and its community. Find out more at www.the-poolhouse.com 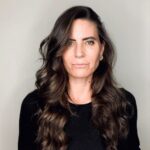 Veronica Beach has almost 20 years of experience working in production and advertising. Beach most recently was Head of Global Production for DAVID, where she was a Founding Member. During her 8-year tenure at DAVID, Veronica won over 100 Cannes Lions including multiple Grand Prix, amongst other awards.

After many successful years of owning her own talent management firm, Pamala Buzick made the full jump into tech in 2016. Buzick builds early-stage start-ups with foundational tech'iness savvy and specializes in two-way marketplaces and SaaS. Pamala continues to consult and is proud of her work with Maven Label, Working Not Working & Girlgaze. She is also currently the COO of Free The Work. 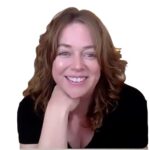 Erin Sullivan is recognized for having over 18 years of experience in advertising and entertainment marketing as an ​EP and Consultant​ on the executive level. The majority of the work she has produced has featured A+ level talent actors, sports figures and musicians. Sullivan’s work has been recognized with multiple awards from the Cannes advertising festival, Clios, and Emmys. 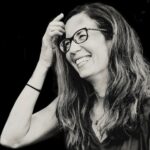 Jill Auerbach’s advertising experience of over 20 years includes an extremely successful freelance career working on award-winning projects for brands like Coke, Google, and ESPN. Working collaboratively with Veronica Beach on Poolhouse in 2006, Auerbach helped provide an inclusive resource for freelance producers. Jill is excited to relaunch the collective bigger and better to help her fellow colleagues and beyond.