Written by Shona Smith on Aug 25, 2020. Posted in Production News

Two weeks of production for Carnival Row season two was completed after filming was interrupted at the beginning of March due to the spread of Covid-19. Strict coronavirus protocols were in place during production in the Czech Republic to ensure that production would go ahead safely. 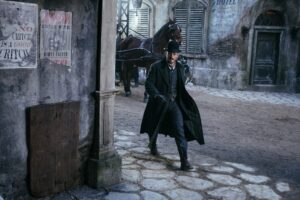 Audiovisual production could restart in the Czech Republic on May 7 under self-regulatory guidelines. Czech productions started almost immediately after the announcement was made and pre-production on other suspended projects, such as Amazon Studios Wheel of Time, Marvel Studios’ The Falcon and The Winter Solider and Netflix’s Haunted, started up again.

David Minkowski from Stillking Films, the Prague-based production company working on Carnival Row noted that “The Czech film industry was hard hit due to the global coronavirus shutdown. I appreciate that the Czech government acted fast and provided great support in order to restart film production. Since the country re-opened on May 7th...international production has returned quickly. It's a testament to the amazing cast and crew of Carnival Row that it was one of the first global shows to get back on its feet and complete filming. To be sure, we adopted strict health and safety protocols even though the presence of the virus in the Czech Republic is low”.

Carnival Row is the longest and most demanding project to have shot in the Czech Republic. The second series began shooting on November 11, 2019 with on location filming taking place in Liberec and at the Sychrov chateau, in Doksany, Nelahozeves, Tousen and Libochovice. Only 10% of the nine hundred strong crew were foreign members.

Based at Barrandov Studios Prague, four hundred craftspeople were employed in the construction of the sets. Season two showrunner Erik Oleson added that “the craftsmanship of our Czech crew is is second to none, among the best I have ever seen in 30+ years in the business. The massive sets of Carnival Row are built out in such meticulous detail that you wouldn't know you’re on a back lot. You can walk its streets and alleys and directly into buildings that are functional working sets of their own. What would be prohibitively expensive to construct and film elsewhere is not only possible in the Czech Republic, but the locals make it happen for a reasonable price and with a smile. Filming there is a pinch-yourself fantasy for any producer”.

While there are ever-changing conditions on various countries regarding the cross-border transport of crew, the Czech Film Fund is working to accommodate foreign filmmakers and, in cooperation with the Ministry of Culture, issues documentation on the basis that foreign filmmakers can travel to the Czech Republic from countries affected by coronavirus. Before boarding the transport, it is recommended that crew members present a negative Covid-19 test result and be tested again immediately after arrival in the Czech Republic; foreign crew members should remain in quarantine until the test results are available. Test results are currently available within 2 to 6 hours after sampling. The duration of the quarantine, therefore, is a matter of hours, and at a maximum up to the next day after entering the country. Amazon Studios and Legendary Television took additional precautions including testing the cast and crew multiple times per week to ensure safe and effective set practices and protocols while in production.