The Deceived is a four part psychological thriller in which a young English undergraduate (Emily Reid) falls for her Irish married Cambridge University lecturer (Emmett J Scanlan). Backed by Northern Ireland Screen, the series was shot entirely in Northern Ireland where the production managed to find convincing doubles for the historic university city of Cambridge, England and rural Donegal, Ireland. 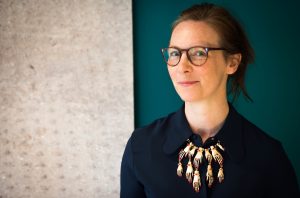 “The way locations look on screen can be an expression of the character’s state of mind. Especially in The Deceived, it was really important to bring locations and design together” says Director Chloe Thomas (pictured right) who worked with production designer David Craig and location manager Adam Wilkinson to find the right locations to double for Donegal and Cambridge.

Can you tell us a little about the role location filming played in The Deceived? 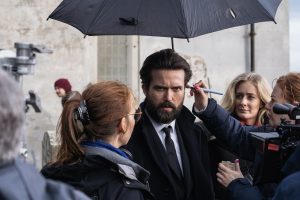 Husband and wife writing team: Lisa McGee (the genius behind Derry Girls) and Tobias Beer were very inspired by classic thrillers like "Rebecca", where the ancestral house Mandalay takes on a big role. So this house was crucial to the drama.

But to contrast to the creepiness of the old family house, other spaces needed to feel optimistic and normal, like the kitchen where Ophelia chats to Sean the builder (Paul Mescal, fresh from Normal People). Some had to feel terrifying even in the middle of the day.

What were you looking for in the Cambridge scenes? 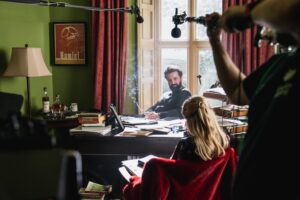 The challenge was finding believable matches for Cambridge, interiors and exteriors. I think I was a bit of a pain because I now live in Cambridge so I would keep saying “that’s not right”. I had to believe that the professor’s room was authentic, not only full of books but also accessed from very small staircase. We looked at various schools, even the Art Deco Freemason’s Hall in Belfast, but the locations were too wide, too airy, too modern. And then I was shown around Killyleagh Castle, a real castle, complete with turrets and crucially, a spiral stone staircase. I fell in love with the circular turret room but it was very small, and I kept hoping it would be big enough to shoot in. 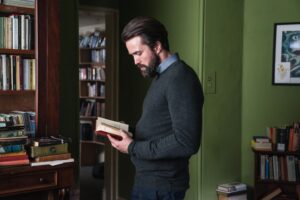 This room is Michael’s little hideyhole where he and Ophelia have sex there for the first time. Once David Craig repainted and dressed in hundreds of books, it looked perfect. And we even managed to put a large jib arm over a chair where the couple are having sex. That was a nerve wracking moment – an intimate scene in a small space with a big grip set up, but it looked amazing.

There were lots of other places we found in Killyleagh Castle too - Ruth’s (Michael’s colleague) Cambridge room, the bathroom where Ophelia gets cut by broken glass in the bath, Roisin’s (Michael’s wife) Dublin book launch reception. It is an amazing place.

For Cambridge exteriors, again I was looking for something that was believable. The fact that Cambridge has many red brick Victorian colleges helped – it is slightly more recent than Oxford. Queen’s University is the obvious choice, designed by Sir Charles Lanyon, opened By Queen Victoria in 1849, but there isn’t a complete 19th century “court”. But with careful framing the exterior of Queen’s worked incredibly well, we shot many scenes there, the front of the main entrance, arches, including the argument between Michael and his former student Annabelle. Once I had researched the redbrick Selwyn College in Cambridge, I was happy that you can totally believe Queen’s as a Cambridge college. We also shot for a day in Cambridge so that the world famous sights - King’s College, St John’s College, the Bridge of Sighs are cut into the drama and it all helps sell the Cambridge scenes. We also shot in interiors there: the old lecture theatre, the outside of the Modern building as the English Faculty, and the 1930’s ladies loos where Ophelia talks to Roisin for the first time.

The house plays a major role in The Deceived, what were you looking for when scouting it? 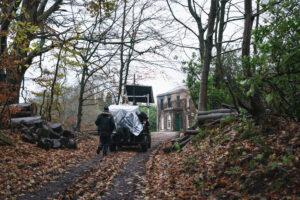 Finding the house was a major highlight - we looked at a lot of houses. In the story there has been a fire and the bedroom - on the first floor - is completely burnt out. It had to feel spooky with a dramatic staircase and with opportunity for great camera angles. I also needed a long corridor leading to the burnt out room and Roisin’s writing room opposite. We did look at some houses that were actually in disrepair, with tarpaulin flapping in the wind on open roofs! - but they were unsafe for filming.

The bare bones of the one we eventually found – Holeston House - were perfect and what was more exciting, was that it hadn’t been filmed in before. It was quite near to Belfast in Doagh. Logistically this meant it was in easy striking distance of our production base, so the Line Producer loved this choice! As well as corridors and stairs, it had an amazing dining room with high windows and shutters and a living room. The kitchen was more friendly, with an AGA and a big farmhouse table which is what I wanted too. 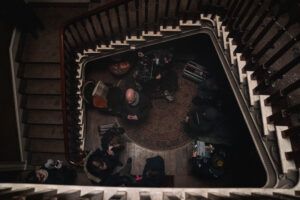 Two things transformed the exterior of Holestone House and made it right for The Deceived. First, we removed a really modern wooden fence which made it look less rural and friendly. Secondly, we took all the leaves off the ivy, which made the facade look really creepy, almost like veins. 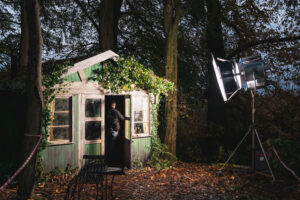 David Craig Production designer built the summer house from scratch, and placed exactly where we wanted it, in the back garden, and aged it so it looked like it had been there forever. We all wanted to ship the summer house back home with us, it looked so good.

The family living in Holestone House were absolutely lovely too, they were willing to move their son’s bedroom out and because upstairs had to look like there had been fire damage. We were able to clad the walls with soot-effect painted panels. We spent around 10 days in there, but I could have shot longer.

What there any other location highlights? 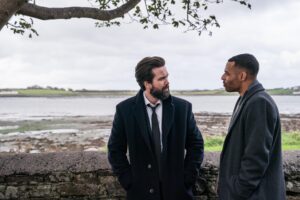 I always saw the church in The Deceived as by the water. I really wanted the sense that it was the edge of the world and to be very remote. We found an amazing church, Killough Church, which is Church of Ireland, not Catholic. We had seen a few others, but maybe due to Derry Girls, these other churches weren’t particularly keen on us filming there. The Deceived is about infidelity - so that just wasn’t going to play well either with some parishes.....

Killough Village was also fantastic looking and the people were very good to us. We found some coastline, a café, Sheila’s bar and a unit base in the church hall. The bar has previously been used for filming (in the Oscar winning short film The Shore) It had the perfect feel - a real local, beer mats on the walls, GAA football flags, etc. so it didn’t need a huge amount changed to get it right. 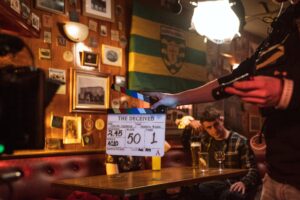 I also got really really excited about Belfast bingo halls! There was a small scene in a back office of a betting shop but I felt I’d seen too many of those and suggested a bingo hall instead. We scouted a few, and chose Star Bingo Hall in Belfast and because of its geometry and long lines of tables it had great forced perspective. On the day, Gaffer Seamus Lynch made up large neon stars to add to the walls and I loved it.

What were some of the challenges you faced while filming The Deceived?

The biggest challenge was roads - it can take a month to get permission to close, you aren’t sure if you can make it work, and what if it is terrible weather? We had to piece a lot of journeys together where I was trying to make it feel like Donegal.

There is a scene where Ophelia is picked up by Michael , after Roisin’s funeral. They start off by the jetty in the village , they drive by the coast, into scrub and forest, (owned by Northern Ireland Water), they then turn a corner - which we didn’t have until the pickup day - and then they get back to the house. That’s four elements! I had made it difficult for myself - but it does work and it allows you to see the landscape, and the characters have a long conversation. 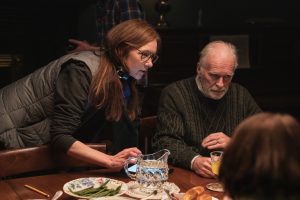 Location manager Adam Wilkinson did a great job with the permissions and logistics on the road filming. These are small lanes and you only have a certain amount of time. People in cars can get really angry if you stop them or make them go miles out of their way – they don’t care if you are filming!

The only thing we couldn’t find in Northern Ireland was a coast with high cliffs on the sea, as the coastline is actually different to Donegal. We shot later in Donegal itself with drones to give a sense of the whole landscape with Michael’s car in wide shot travelling along the dramatic empty Wild Atlantic Way.

How did you find filming in Northern Ireland for the first time?

I hadn’t shot in Northern Ireland before - I thought it was amazing. With a skilled location manager, you can do a lot when you are having to double for other locations. People are also much more open to filming in Northern Ireland. They are also very proud of their country, and they know how beautiful it is - I particularly like the coastal landscapes. I would definitely shoot there again. 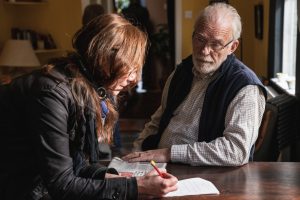 Location Manager Adam Wilkinson was a great person to work with - he just gets what you are after and he is a great laugh. Which is actually very important when you're in their car for hours and hours!

I would also say that the weather is a challenge – even compared to England. It’s so changeable. You get four seasons in an hour, rather than in a day, from amazing sunshine to heavy rain. But this is normal for the crews there, and most of them are ex- Game of Thrones and have seen a lot of extreme location weather!

As well as The Deceived, BAFTA and RTS nominated Chloë directed 3 episodes of Harlots, season 3 (Hulu/BBC) and Victoria (ITV/Masterpiece), work

Chloë is attached to direct the feature film Making Babies - a rom-fertility-com by Deborah Frances-White (The Guilty Feminist), with Redwave Films (The Full Monty).