Written by Shona Smith on Oct 2, 2020. Posted in General Interest

The Pact UK Production Census reveals that global demand for UK content broke the GBP1 billion barrier in 2019, and that commissioning spend outside of London continued to grow. 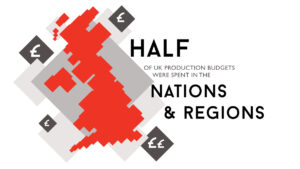 Commissioning spend outside of London also grew, accounting for 43% of all primary commissions revenue, with nearly one-quarter coming from international commissioners. Scotland and the South-West saw almost half of this commissioning spend with 10% and 9% respectively.

In its entirety, the UK production sector revenue rose by more than 30% over the past five years and in 2019, UK television production sector revenues rose to a new high - largely driven by increases in primary commissions revenue from overseas. Global demand for UK content broke the GBP1 billion barrier for the first time in 2019, while domestic TV revenues maintained steady growth.

John McVay, Pact CEO said “Despite the obvious challenges that the sector has faced this year, I am confident that UK indies will weather the storm and continue this international success story”. Sara Geater, Chair of Pact and All3Media Chief Operating Officer added “These record revenues show very clearly that the indie sector has had huge success in 2019, reflecting the importance of our independent TV production sector to the international market. We can look forward to the production levels from UK indies returning to meet the global demand for the high quality, original content that audiences around the world love.”

The Government backed GBP500 million insurance fund for film and television production will help independent production companies resume production in the wake of Coronavirus. The fund covers Covid-19 related losses for cast members, crew illness, delays or disruptions caused by the pandemic that are not insured by existing policies.

The Pact Census is an annual survey detailing the characteristics and evolution of the television production landscape within the UK. To find out more about the reports findings click here.