Written by Shona Smith on Feb 12, 2021. Posted in General Interest

The crew service has secured 3,127 days’ work for skilled freelancers working in the region’s growing film & TV sector. Fable Pictures was one of the production companies to utilise the service for a high-end TV drama, hiring twelve local crew members on period drama Anne Boleyn (pictured below), which filmed entirely in Yorkshire in late 2020. 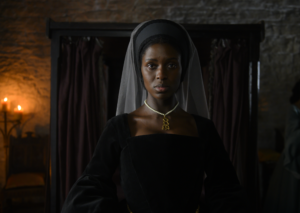 The Crew Service launched in July 2020 to support the region’s hard-hit freelance workforce as a result of the pandemic. Other regional film agencies including Screen Suffolk launched similar services in the wake of the crisis to connect film and TV production companies with skilled, local freelancers. The platforms ensure that the maximum number of local crew are hired by productions filming in the region, as well as helping incoming productions limit unnecessary travel.

Anne Boleyn was one of the first high-end TV productions to utilise Screen Yorkshire’s Crew Service. The series shot entirely in Yorkshire in 2020 at locations including Castle Bolton in Richmondshire. Twelve crew members across the locations, camera, sound, hair and makeup, and Covid health & safety departments were hired for the production.

Claire Campbell, Head of Production at Fable Pictures, said "We have just completed filming Anne Boleyn entirely in Yorkshire during November & December 2020.  Since the project was imagined back in spring 2019, Screen Yorkshire bowled me over with great advice and links to locations and crew suggestions.  This support carried on all the way through the project and we will definitely be back. Wonderful locations and great crews."

During the first six months of operation, the service has secured work for freelancers across 99 individual job roles on productions filming in Yorkshire under the new industry approved COVID safety guidelines. Productions that have utilised the service include returning series Gentleman Jack, All Creatures Great and Small, The Witcher, Ackley Bridge, The Syndicate and Emmerdale. as well as factual series Steph’s Packed Lunch for Channel 4 and Saved and Remade on BBC Two.

Olivia Thomas, Film Office Coordinator at Screen Yorkshire says "The impact of our Crew Service has been remarkable and demonstrates the resilience of Yorkshire’s film & TV industry in the face of COVID.  After such a tough year, supporting our freelance community has become more important than ever. And because of a halt in filming during the first lockdown, we are seeing a real upturn in demand for filming services and crew in the region."

More than five hundred individuals are registered across skilled technical job roles. The crew database is open to freelance regional crew who have at least one professional credit in drama or non-scripted.

Jacqueline Russon, Hair and Makeup Designer (Madeleine,'83, Born a King) is a registered member who says "I made contact with Screen Yorkshire last summer and signed up to their crew service immediately. Shortly afterwards, Olivia put me forward for work on Netflix drama The Witcher, which filmed at the stunningly beautiful Fountains Abbey. The support of the Film Office team was instrumental in helping me find work in Yorkshire and I would highly recommend their crew service to industry freelancers hoping to find work in the region."