Writer and director Tom McCarthy (Spotlight, The Visitor) set out to make a thriller set in a European port city ten years ago.  In 2019, Stillwater began shooting on location in Marseille, France, and Oklahoma, USA. Both locations are up and coming production destinations that are attracting a range of productions. 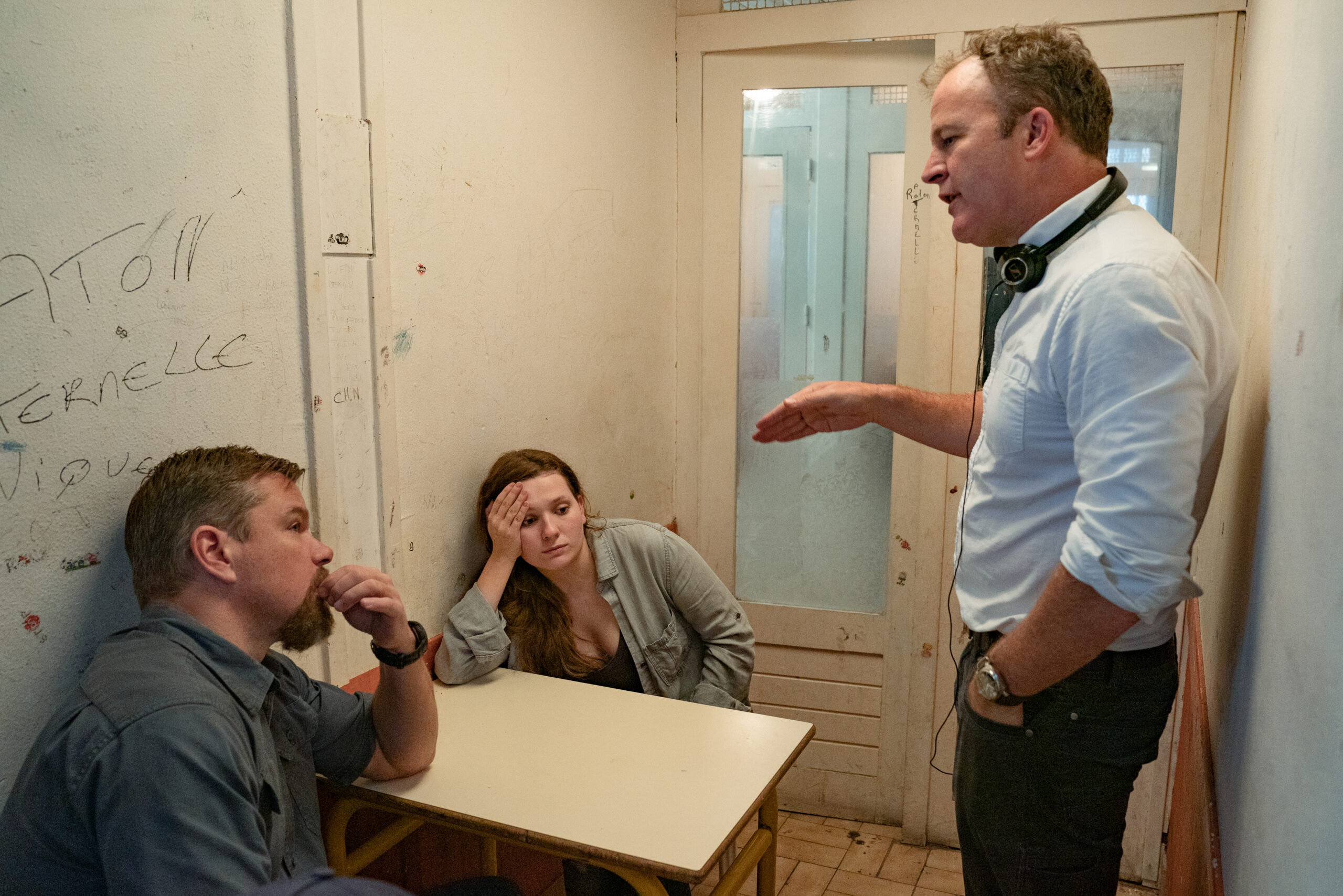 The film stars Matt Damon (Downsizing, The Martian) as Bill Baker, an unemployed Oklahoman oil rig worker and Abigail Breslin (Little Miss Sunshine, Zombieland) as his estranged daughter who is imprisoned in Marseille for a murder she insists she did not commit. When Allison presents her father with a new lead he takes matters into his own hands and attempts to exonerate his daughter but is confronted with a foreign land he does not understand nor belong in. Bill struggles in his mission until he meets a local woman and her young daughter who help him uncover the truth.

“Living and shooting in Marseille had a huge impact on the film. We didn’t spend a day on a stage", director Tom McCarthy

With most of Stillwater set in Marseille, the city becomes front and centre as Bill navigates a culture unknown to him. Marseille, France is the second largest city in the country after Paris and the third-largest metropolitan area in France after Paris and Lyon. As a port city on the Mediterranean, Marseille is a cosmopolitan melting pot with many immigrants from Algeria, Tunisia, Morocco, Turkey, Italy and Poland, as well as a variety of other countries. 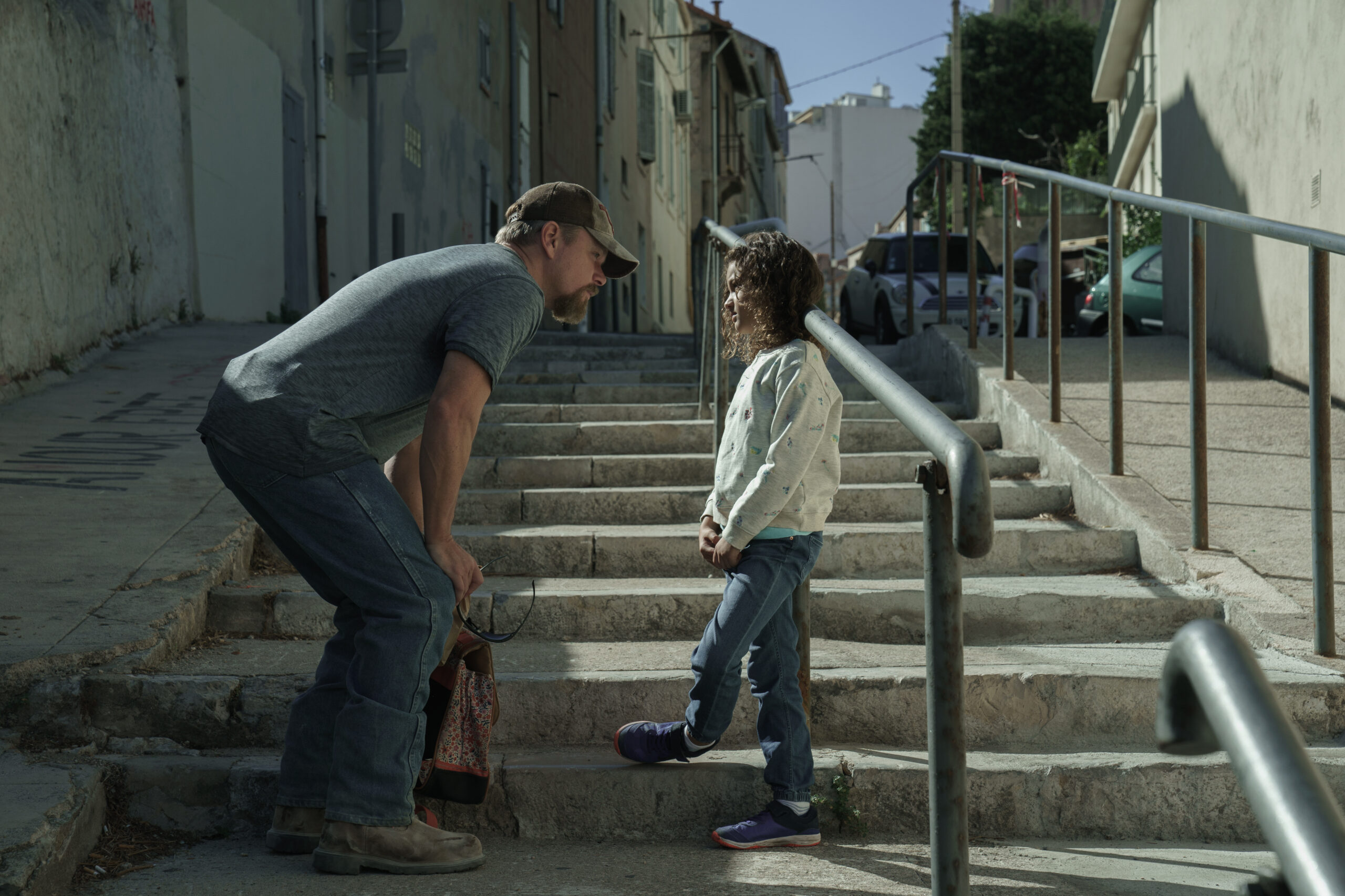 “One visit to Marseille and I knew that I found my port. The layers and textures of the city were undeniably cinematic, and the confluence of cultures and the pace of the seaside metropolis felt like the perfect canvas for the film”,  director Tom McCarthy

“One visit to Marseille and I knew that I found my port. The layers and textures of the city were undeniably cinematic, and the confluence of cultures and the pace of the seaside metropolis felt like the perfect canvas for the film” said director Tom McCarthy.

The production also shot in location in Oklahoma City and surrounding towns where the film begins. “Stillwater is flat with a lot of space and stillness,” McCarthy says. “In contrast, Marseille is incredibly vibrant. Part of the reason I love Marseille is the light—there’s a reason the south of France has attracted painters for centuries. We wanted to capture that.”

France and Oklahoma both provide attractive incentives and both Marseille and Oklahoma have a growing production industry. Oklahoma has recently increased the state Film and TV incentives to attract higher impact productions. Most recently, Martin Scorsese’s Killers of the Flower Moon and FX Network’s Reservation Dogs have shot in the state.

Productions shooting in France can access the  TRIP incentive offers 30 or 40% of eligible expenditures depending on how much VFX work is done in the country. Marseille itself is an expanding production hub with the growth of Provence Studios, which is currently hosting its first international production, Lionsgate's Serpent Queen. 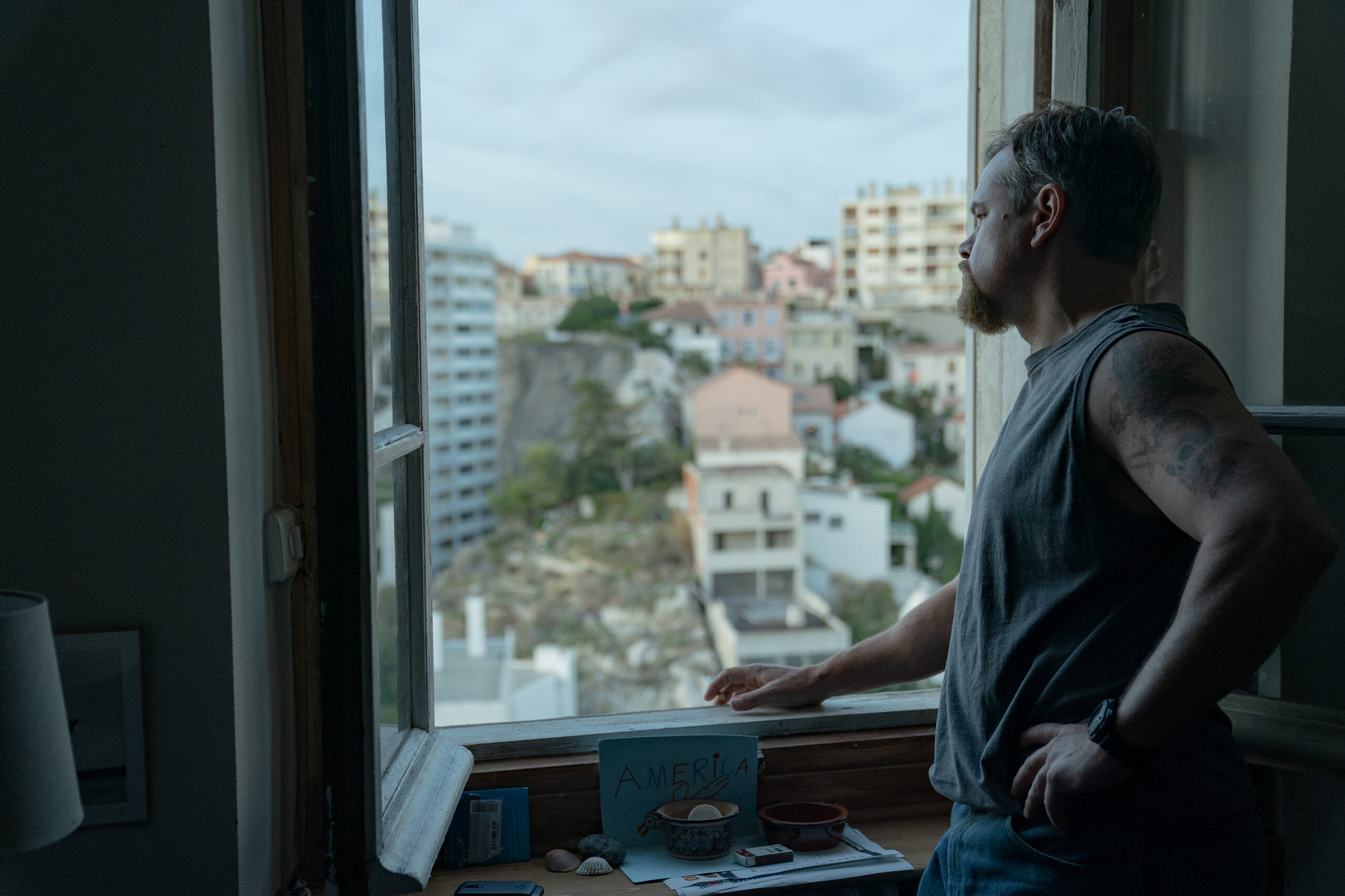 McCarthy says  “living and shooting in Marseille had a huge impact on the film. We didn’t spend a day on a stage. I could feel my team digging deeper and deeper into the city, and the more we leaned into it, the more the city opened u and revealed itself to us. From the stunning Calanques to the massive Velodrome to the old prison in Les Baumettes. I don’t think there was a day or a location that we didn’t feel inspired by. And credit my production designer, Phil Messina with providing our Marseille canvas in such an intimate and authentic way.” 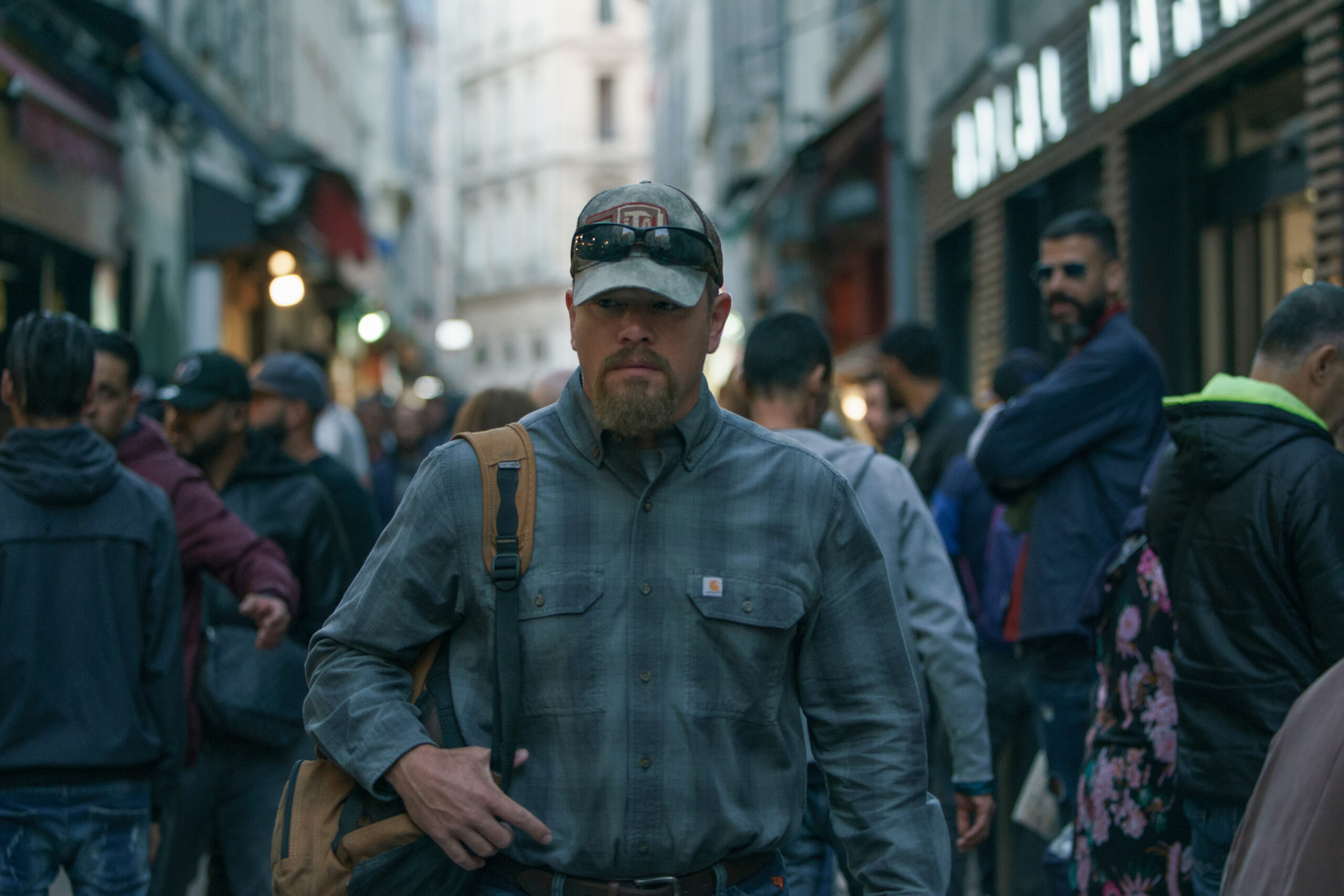 The production team worked to focus in the parts of the city where people lived and worked rather than the postcard version of Marseille. “We all talk about the beauty of the south of France, and it’s immediately apparent when you get to Marseille,” producer Jonathan King says. “But there are layers to the city. It’s thousands of years old, and it’s very vibrant and multicultural. The streets filled with graffiti are incredible—it’s part of the fabric of the city. 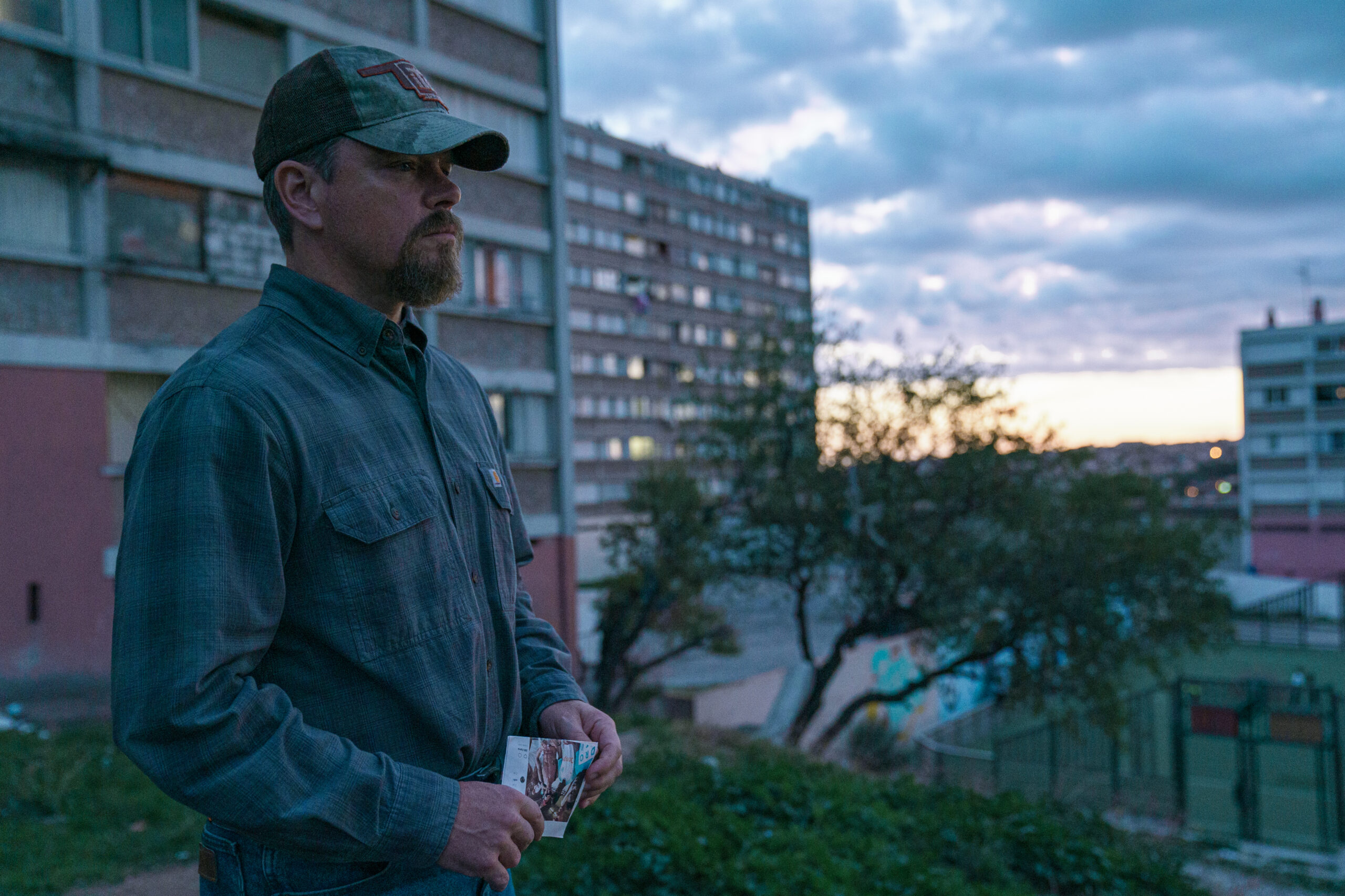 Authenticity was also a principal concern. The shoot visited an abandoned portion of Baumettes Prison, which production designer Messina says, “had such great character to it. We did some minor modifications but really not that much at all.” For scenes set in the housing project where Bill goes to search for Akim, the production headed to the Kalliste housing projects on the city’s northern outskirts. “We scouted it, and it laid out so perfectly,” Messina says. “Once you were in the middle of it, it was a complete world unto itself. There was one tower that was in the process of being torn down, so they were throwing stuff out of the windows—like beds and furniture. It was a devastating environment to be in. What struck both Tom and I on our first couple of scouts there, there’s a layer of normalcy in the daylight hours that changes very much during the nighttime hours. It’s a community. It’s multi-dimensional. Tom didn’t want it play into this idea where it’s this nasty place where only bad things happen. There are good people there, too.” was not right and a little bit nasty,” Messina says. 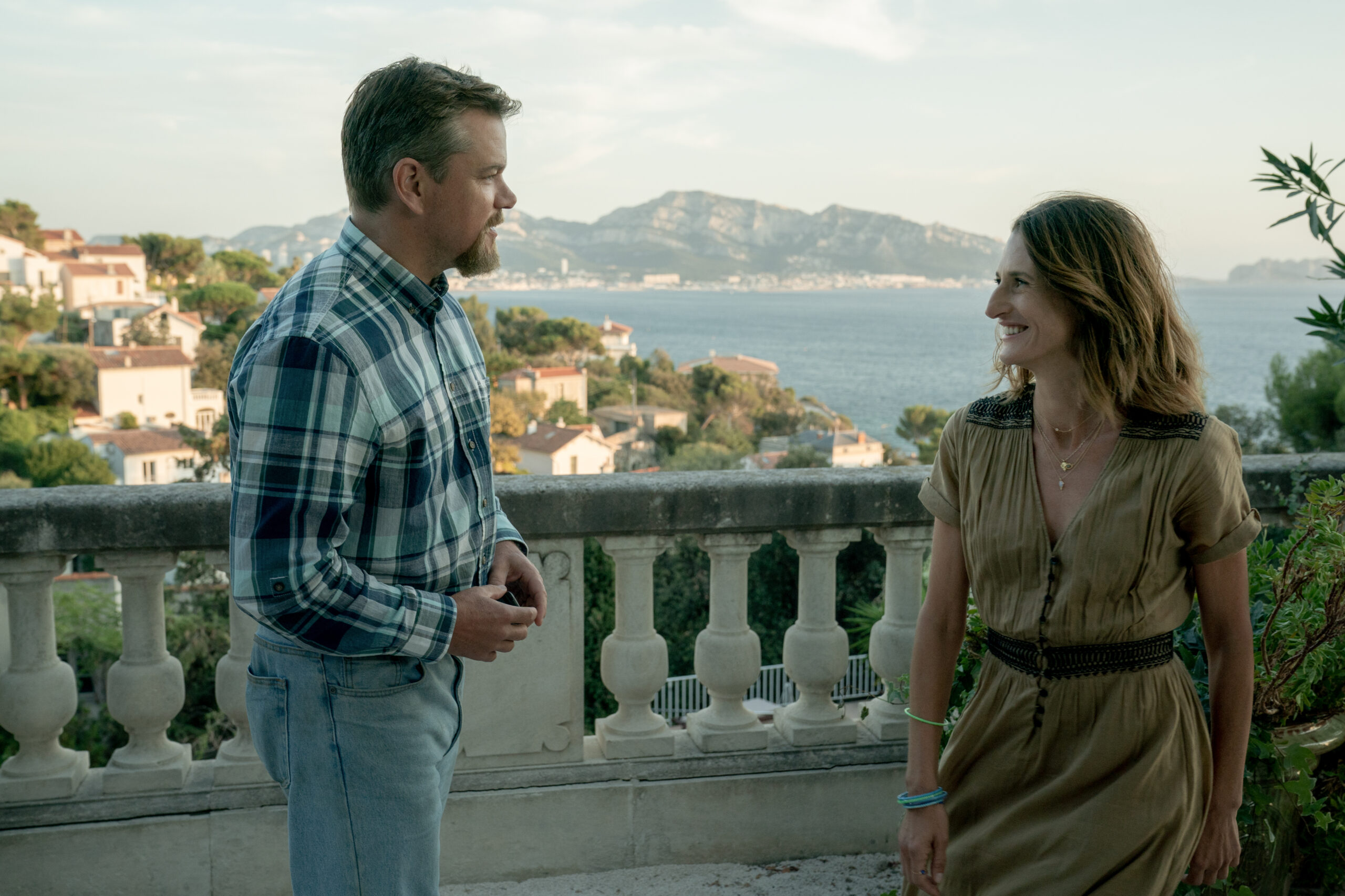 One of the most logistically complicated sequences took place in Marseille’s 67,000-capacity Stade Vélodrome, home to football club Olympique de Marseille, or OM. The production shot the sequence during a live match. Cinematographer Takayanagi says “we filmed with multiple cameras to capture the atmosphere as much as possible. Then, we filmed close-ups and some other shots on a day when the stadium was empty.” Adds Messina “The good thing about Matt’s character is he stands out like a sore thumb in Marseilles because of the goatee and the baseball hat, but he doesn’t look like Matt Damon”.