Written by Joe Jackson on Oct 25, 2021. Posted in Awards and Festivals

The Production Guild of Great Britain (PGGB) have opened nominations for their 2022 Awards. The event recognises remarkable achievements by PGGB members working in film and high-end television production – especially in the fields of accounts, assistant directing, locations, post-production and VFX.

“The UK film and TV production sector has shown an incredible bounce back following the challenges of 2020/21,” states Lyndsay Duthie, The Production Guild’s Chief Executive Officer. “Today our members are busier than ever, bringing their skills and experience to an unprecedented number of productions, of all sizes, budgets and genres."

"During such busy times, The Production Guild of Great Britain Awards provide a chance to pause together for one evening, to recognise and applaud the world class standard of their work. We’re delighted to offer a total of six award categories this year, including for the first time, separate awards for Film Production Team of the Year and High-End TV Production Team of the Year, and our new Diversity and Inclusion Champion Award.” 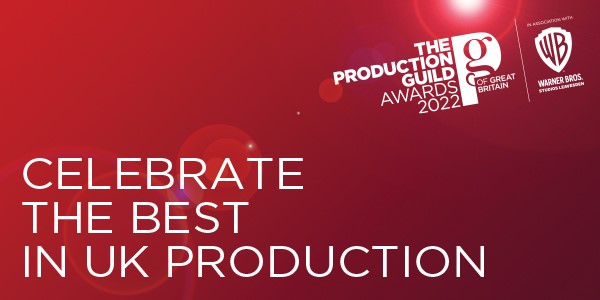 In association with Warner Brothers Studios Leavesden, the 2022 edition of the PGGB welcomes nominations by its members until 26 November.  The ceremony is scheduled for 26 March 2022 at The Grove, Hertfordshire. Eligible activities must have taken place between October 2018 and September 2021.

Nominees for all awards (except the Contribution to the Industry category which is decided by the PGGB Board) must be PGGB members and can be from film or television drama working within the production office, accounts, locations, assistant directing, post production or VFX. The six main categories are: Contribution to the Industry, Diversity and Inclusion Champion, Film Production Team of the Year, High-End TV Production Team of the Year, Spotlight on New Talent, and Inspiration.

“The past year has been incredibly busy with demand for UK film and TV production being at an all-time high,” declares Emily Stillman, Senior Vice-President at Warner Brothers Studios Leavesden. “The PGGB Awards are a great way to celebrate our amazing industry talent and we are incredibly proud to be sponsoring this prestigious event.”

Pact CEO John McVay and See-Saw Films COO Hakan Kousetta were 2021’s joint winners of the Contribution to the Industry award, and a special In Memoriam award was made to late producer Willy Wands. Full details on nomination criteria and rules of entry for 2022 can be found online at https://productionguild.com/pg-awards.