Written by Joe Jackson on Mar 2, 2022. Posted in Awards and Festivals

LMGI welcomes entries from around the world for 9th Annual Awards

The Location Managers Guild International (LMGI) has announced that submissions for the 9th Annual LMGI Awards are now open online. The LMGI Awards celebrate the instrumental role of locations in developing character and advancing cinematic narratives. The ceremony also honours film commissions who have gone above and beyond during the scouting, pre-production and production of specific projects.

“The LMGI Awards celebrate the incredible creativity of our craft,” says LMGI President John Rakich, “showcasing the talent, skill and hard work of location professionals worldwide in setting tone and enhancing the storytelling narrative. All of our nominees last year did just that, and we cannot wait to showcase our industry’s talent at this year’s event. We are really excited to accept submissions from across the globe, and invite everyone to do so.” 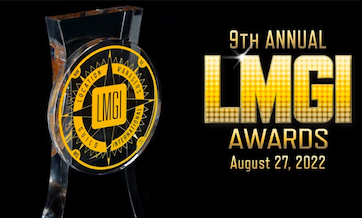 For 2022, the LMGI will introduce two voting rounds for LMGI Location Professionals in good standing. Members will have an opportunity to vote first for the nominees and again for the winners.

The entry and voting timeline for 9TH Annual LMGI Awards is as follows:

The LMGI accepts domestic and international submissions for work that demonstrates the importance of locations in supporting character development and storyline. Productions that were first released between June 2 2021 and June 1 2022, with at least 60% of the production shot on location are eligible. Nominations will be announced on Tuesday, June 28 2022. Submissions are open to LMGI members and non-members alike. Submissions can be made here: locationmanagers.org/submissions-9th-annual/.