Written by Joe Jackson on Mar 11, 2022. Posted in Awards and Festivals

straight 8 shootout returns to Cannes for 2022

The straight 8 shootout is heading back to Cannes for 2022. The competition is organised by straight 8 as a filmmaking showdown for companies across the world. Businesses are invited to make their own short film and compete for charity. However, directors must edit their respective projects entirely in-camera on just one roll of super 8 film. The first time anyone sees these films - including the filmmakers themselves, and no matter how their work finally turns out - will be at the premier in Cannes's Cinema Les Arcades on Friday June 24th.

“straight 8 is a brilliant film competition,” says Steve Davies, Chief Executive of APA London. “We are delighted to be back in Cannes with it this year and supporting its launch event in London. It is a fantastic opportunity and platform for emerging directors to showcase their skills and creativity in front of the wider industry.”

“Caviar won gold last time with Quba Tuakli directing, and we're aiming for the crown again!” declares Sorcha Shepherd, Managing Executive Producer at Caviar London. “It’s our third year doing straight 8 shootout and we support it because it’s a truly unique and fun event to be involved with.  The laughs we had creating Quba’s award winner from last year is honestly one of the reasons why we are back for more. So I’m throwing down the gauntlet here, come at us with your A-game because we are looking to retain that gold!” 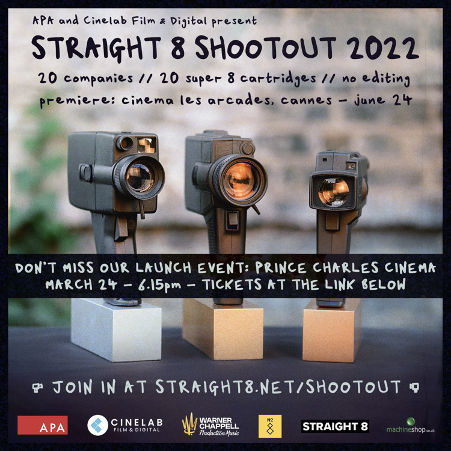 Since launching the shootout in 2016 with APA London, the competition’s success has been proven at Cannes, Ciclope and Adfest. Two lockdown editions also took place, with a live online premiere broadcast to a global audience, showcasing entrants in Australia, Spain, South Africa and Japan. For this year's edition, a launch event in London will take place on March 24th at the Prince Charles Cinema, at 6.15pm. Each ticket includes a drink token for the post-event drinks at a nearby venue: https://www.tickettailor.com/events/apa2/659441.

Many top creative companies from around the world have now risen to straight 8’s shootout challenge. It is possible to see the winning films of companies who have entered the shootout, as well as of the charities who have benefited from the competition, on straight 8’s official website.

Films must be made by the end of May, and only 20 companies can compete. Competitors can sign up at: https://www.straight8.net/shootout-2022.

MAY 30TH: Film delivery deadline (film to arrive in London)