Written by Joe Jackson on Jun 1, 2022. Posted in On Location

A new Disney+ series about British punk band Sex Pistols features a wide range of London locations. Pistol is the story of a group of spotty, noisy kids who challenged the establishment with their countercultural way of life. The show is based on Lonely Boy: Tales from a Sex Pistol, the memoir of guitarist Steve Jones. Location experts FilmFixer were on hand to help, bringing director Danny Boyle’s vision to life across the English capital. 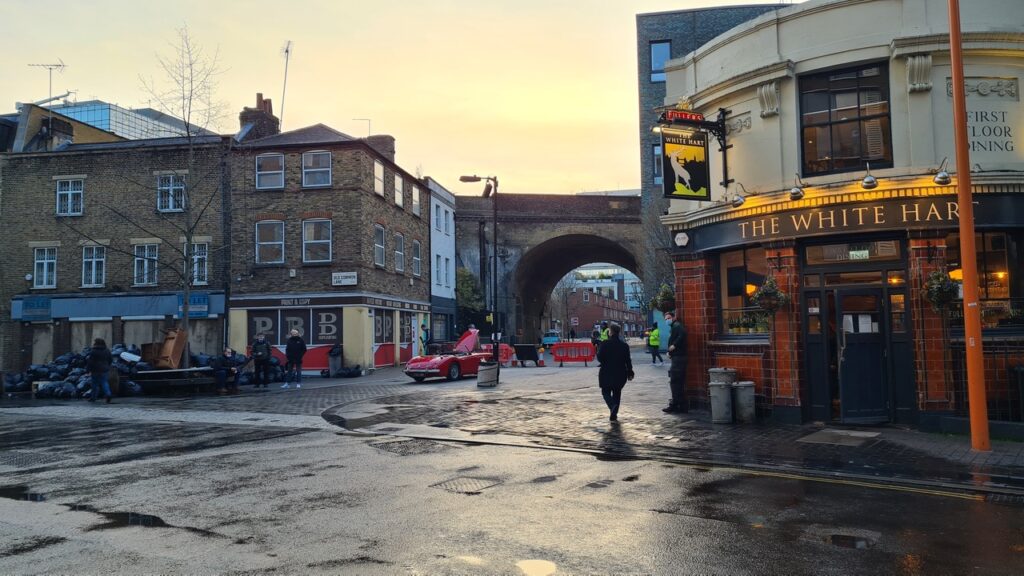 “Pistol was shot in the first few months of 2021, when Covid-19 regulations were very much in force,” explains Andrew Pavord, Co-founder and Chairman of FilmFixer. “The film officers and locations team worked extremely hard making sure that residents of the Six Acres Estate in Islington were happy about the filming. Other locations were Convoys Wharf in Lewisham, where Steve Jones runs amok in a fork lift truck, and Peckham Rye which stands in for 1970s Camden Town.”

Lead singer John Lydon – otherwise known by his stage name Johnny Rotten – was an Islington boy, and the production features a night shoot on the Six Acres Estate where the rebellious frontman grew up. Large lighting cranes and rain machines were needed, and the estate was dressed to reference the notorious 1970s binmen strike.

“Some residents could remember the young John Lydon who lived nearby 45 years ago!” adds Pavord. “The scene was set during the binmen strike of 1976, known as the ‘Winter of Discontent.’ A lot of black bags were piled up around the estate as set dressing.”

A gift of GBP2000 was donated to the Andover Community Centre, near Six Acres Estate, to express the production team’s appreciation. Community Centre Manager Chris Donovan explained that the money would be directed to a number of community projects, such as 'Soul in the City’ festival which is heavily attended by local residents.

More filming took place on Brandon Estate, Rockingham Estate and Southwark Street Estate, emphasising how council estates are an integral part of the story. Exterior arrivals and departures were also shot in South London’s Rye Lane. Although the location at Rye Lane is pedestrianised, FilmFixer facilitated the shoot thanks to special vehicle permissions.

Great Suffolk Street, meanwhile, captured a car chase sequence at night. The action – involving a police car – was shot from above using a drone, which rose and descended close to the junction where Union Street and Great Suffolk Street meet. Ditches Lane in Croydon featur the band’s tour bus as it travels through the countryside, and Camden’s Charing Cross Road appears when four characters wheel an amp across the road.

There are scenes in Flitcroft Street, Bloomsbury Square, Goodenough College and Denmark Street (where Tin Panel Alley has established itself as part of the folklore of London’s music scene). North London’s Barnet hosts a punk gig, with Phoenix Cinema providing parking and Malcolm Park adopted as the location for drone filming. Pistol is currently available to watch on Disney+.