Written by Kianna Best on Jul 28, 2022. Posted in Interviews

Brett Danton talks about the future of virtual production

We had a conversation with NM Production's director Brett Danton about his views on the rise of virtual production in the audio-visual sector, the impact it has had on his approach to content creation, and whether technology could ever dominate the traditional processes of the industry.

Recently Danton, along with WPP, worked on bringing pop rock band Bastille's music to the metaverse. Viewers were scanned into the dystopian landscapes and had the opportunity to partake in the band's Give Me The Future Experience. Creating an immersive space for Bastille's international fanbase, Epic Game's Unreal Engines software allowed for the designing of an otherworldly environment, shifting the perception of the concert going experience altogether. 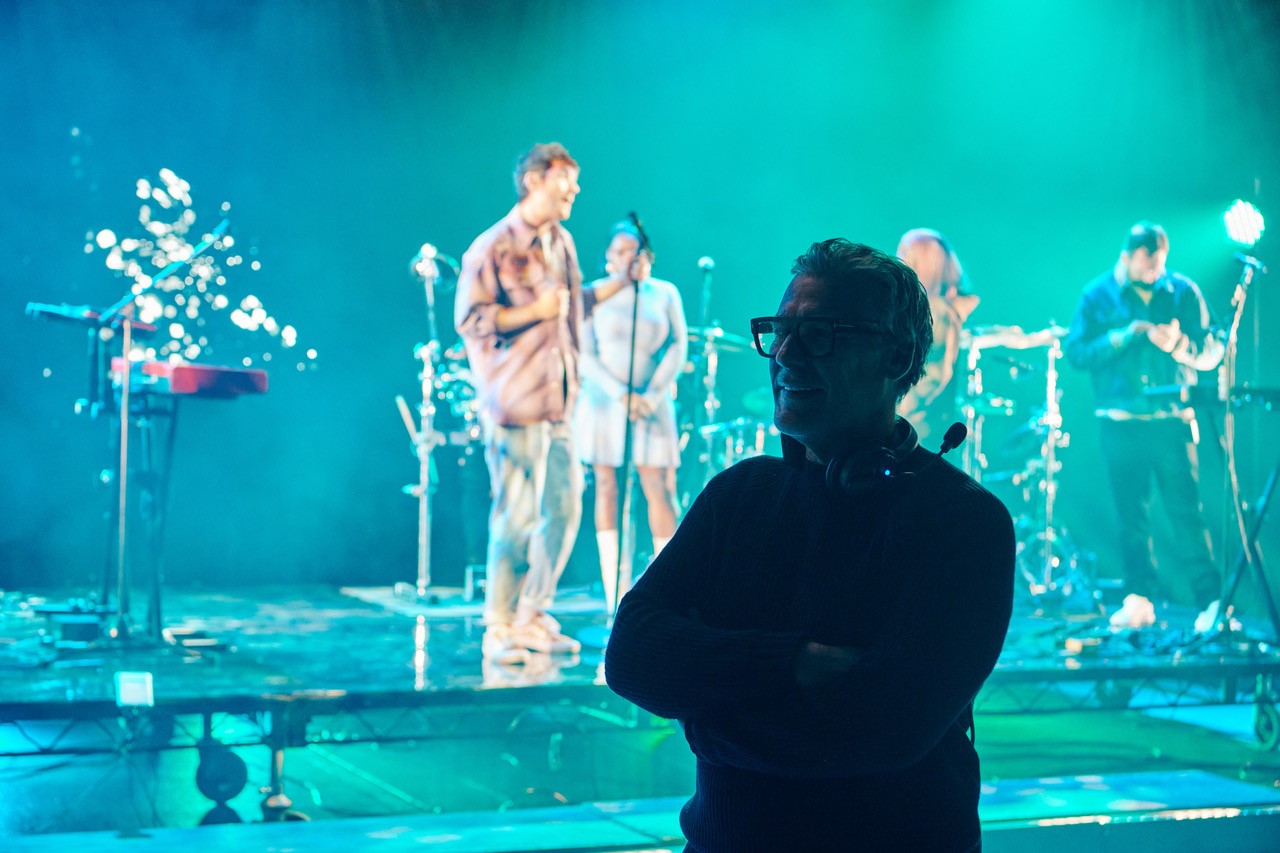 With many directors and cinematographers very much rooted in the more traditional approaches to visual content creation, with over two decades in the industry, why do you think you have always been so open to the developments of modern technologies and processes?

I think technology has always fascinated me. From day one I've played around with technology and have always wanted to see how far you can push it. You can see where the industry is heading, and if you're not in the forefront of that technology you will get left behind. I've seen that starting life as a stills photographer and going through the transition from film to digital. Some really good photographers got left behind solely because they didn't want to learn the digital processes. Then with motion moving from film to digital, it’s the same. I think if you really want to keep going, and particularly as you get older in life, you've got to stay out in front, and the way to do it is to get familiar with technology. 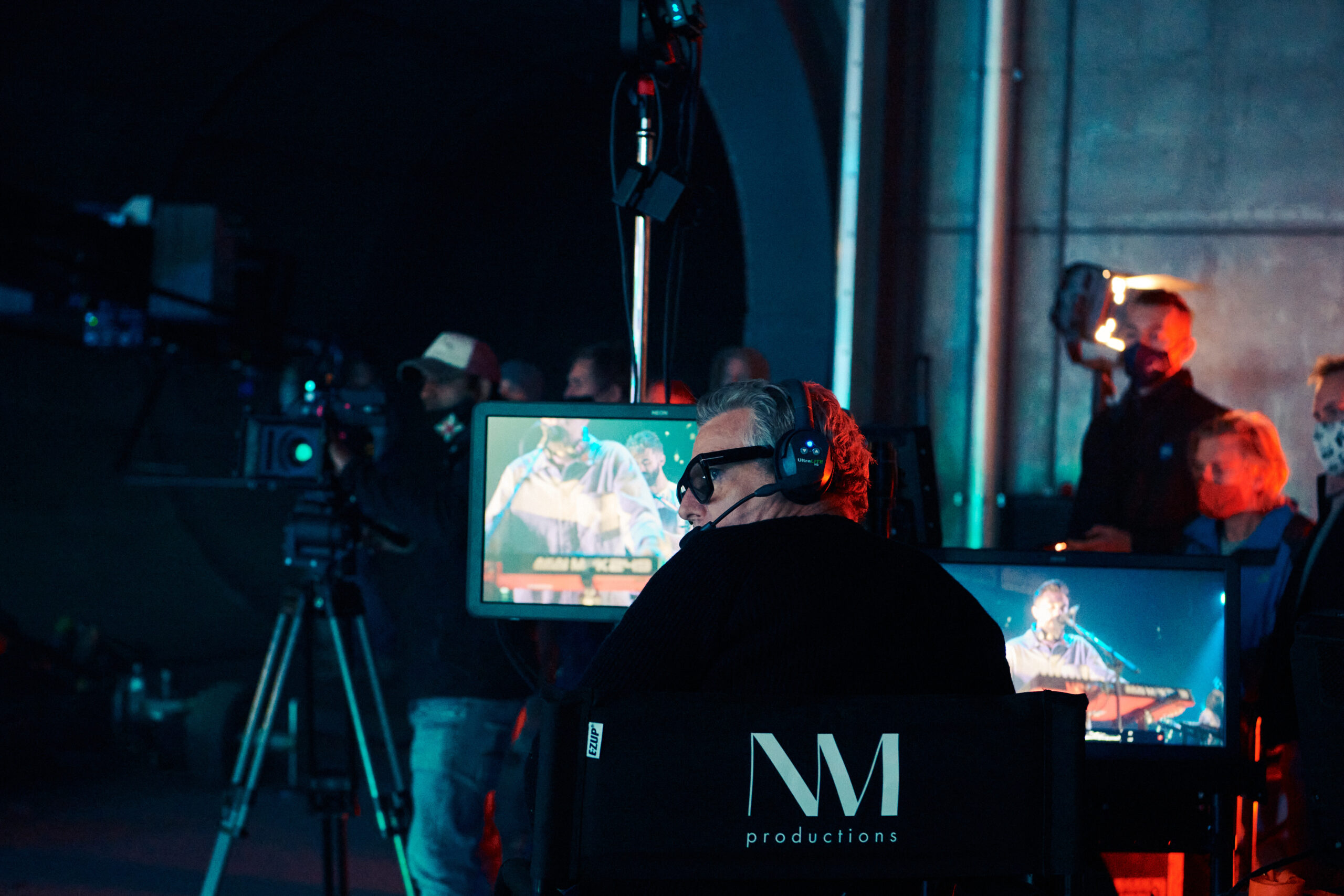 What differences do you see between working with virtual production software in the music industry versus your experience in the advertising industry?

Probably the one thing with the music industry is that you’re finishing a three minute clip so to speak, so it's almost like doing a short film, whereas obviously, with an ad you’re selling a product. So both are selling stuff but with advertising you have company logos and text that you need to consider, whereas with music what I find is that you can probably be a little more creative in that the shots aren’t signed off and you have a more creative freedom. Yes you do a treatment and the usual preparation, but on the day you have more to play with. When it comes to advertising, it is all very locked down prior to the shoot, and there are ten people signing it off, whereas with the music side of things the really enjoyable part is the amount of experimentation it grants you. 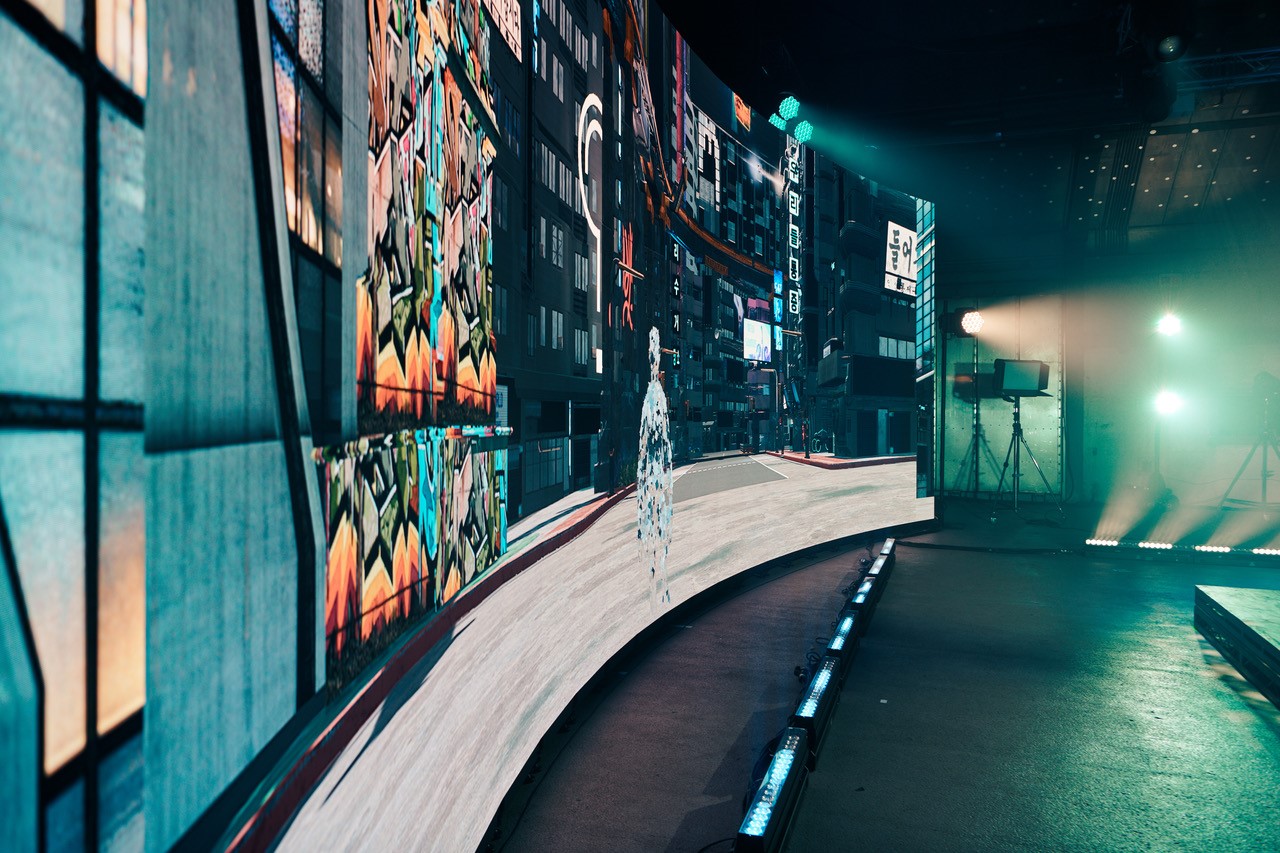 Beyond tackling the environmental factors of physical production sites or studios, how has this software shifted your approach to content creation?

With this software, you have to be able to work across both. You've got to be able to work traditionally for shooting film and then you’ve got to be able to work in a digital environment. Neither one will work on its own. Yes, I could go up there and shoot film. Yes I could go up there and do digital. But if I could combine the two of them, and I know what I'm doing inside of each to join them together, then that's the perfect scenario and that's what we did on the Bastille project. So the big thing is with the environmental side of things, suddenly we’re not on outside locations, and rather than having massive amount of crew, we’re in the studio, so we’re not out on location trashing a beautiful place, we’re creating inside the studio. So the environmental impact is a lot less and we can shoot a lot quicker because we're not worried about the weather in the environments and we can change the time of day. We can make whatever environment we like. We can go from sunset to sunrise in two minutes, or tenminutes to reset everything rather than waiting 14 hours and paying crew overtime. We can definitely reduce the headcount on set, I mean you’re going to have a few more testing days at the beginning, but on the actual set, compared to if you're going out and capturing those real-world environments, you'll definitely reduce headcount in a studio set up. 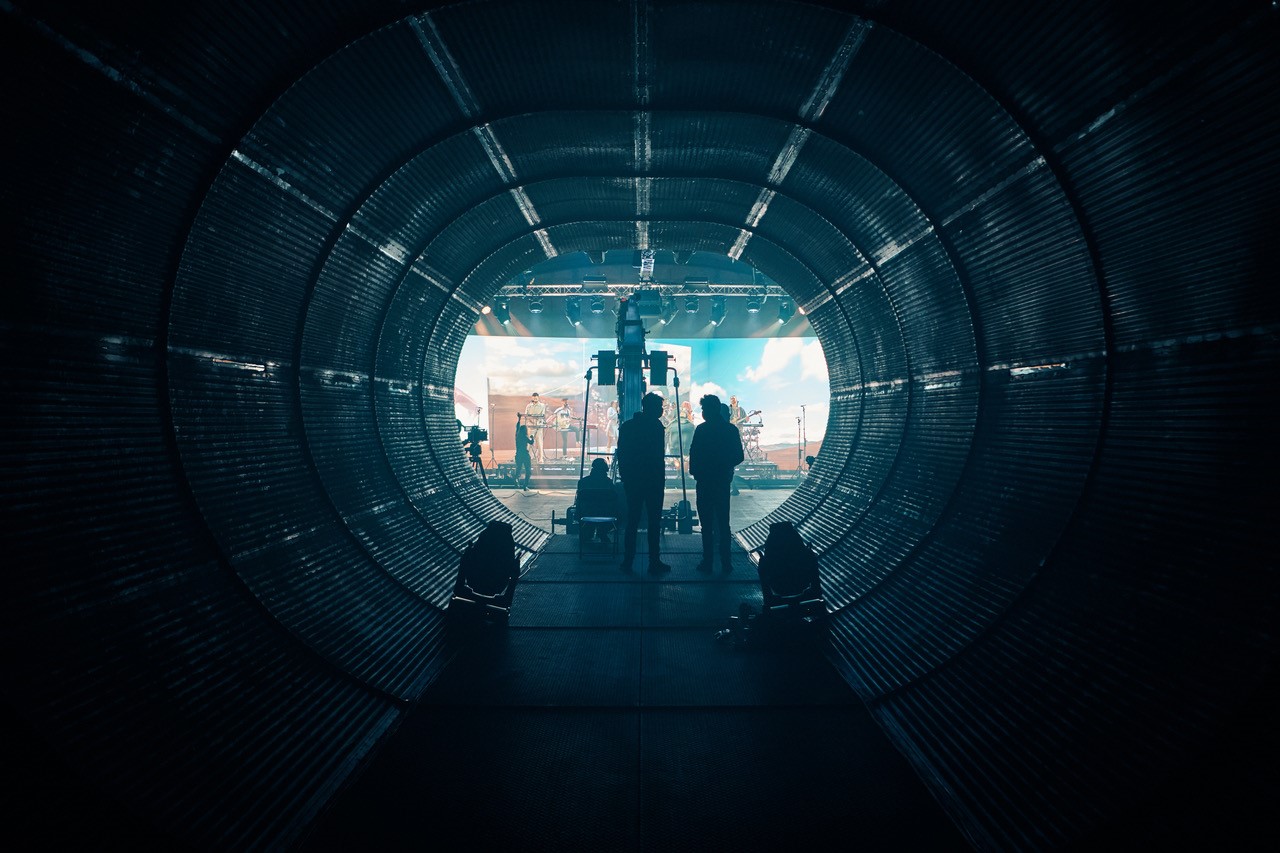 As fans across the world can access the Bastille experience through the Oculus Quest App, does this increased accessibility have the potential to detract from the value of the real-life moment?

No, well for me what it does, by putting you inside the 360, you are actually at a concert inside a different world and that's the thing that I love about it. We can’t go to a real life concert inside a futuristic world, not physically, but if I put on the glasses I am there. Because it’s in stereo and it's in 360, in other words it wraps all around you, everything's going on, you literally feel like you're there and you're in this metaverse. It's really immersive!

With the recreations of physical spaces and experiences in a virtual form, where do you see the future of on location filming for the audio-visual industries? 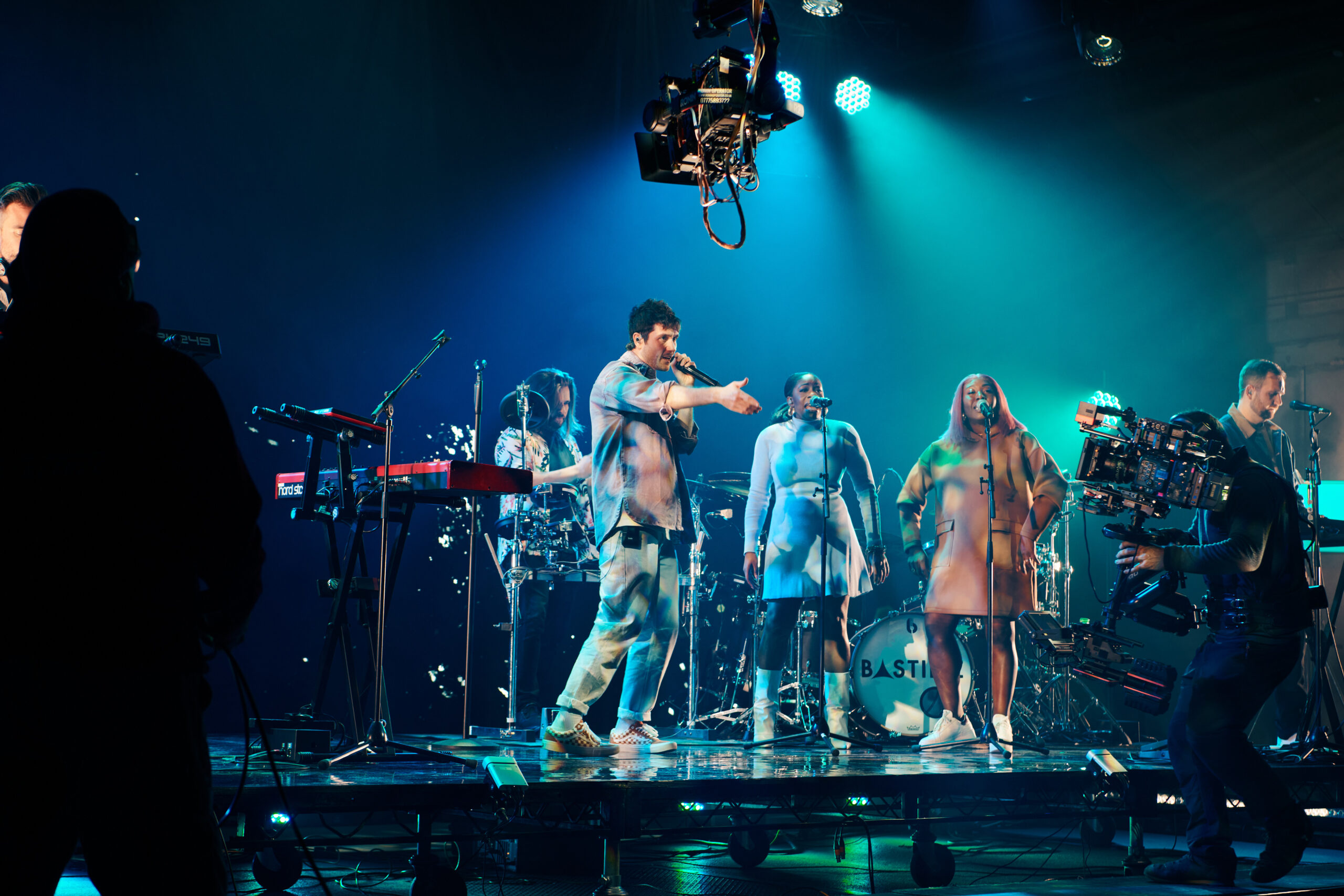 Do you feel as if there can ever be a complete reliance on virtual production processes for the creation of filmed locations?

No, I do think you need both. Yes, if the script lends itself, you could possibly do it completely, but I still think you need those traditional backbones to make it work. They need to compliment, and they need to work together. Unless you spend a massive amount of time on it, beautiful rolling hills and real-world scenarios in big spaces, like at the tops of the fields in Tuscany (which I shot recently with NM), trying to recreate that in digital is really really hard, whereas the close-up stuff we can do in digital quite easily. 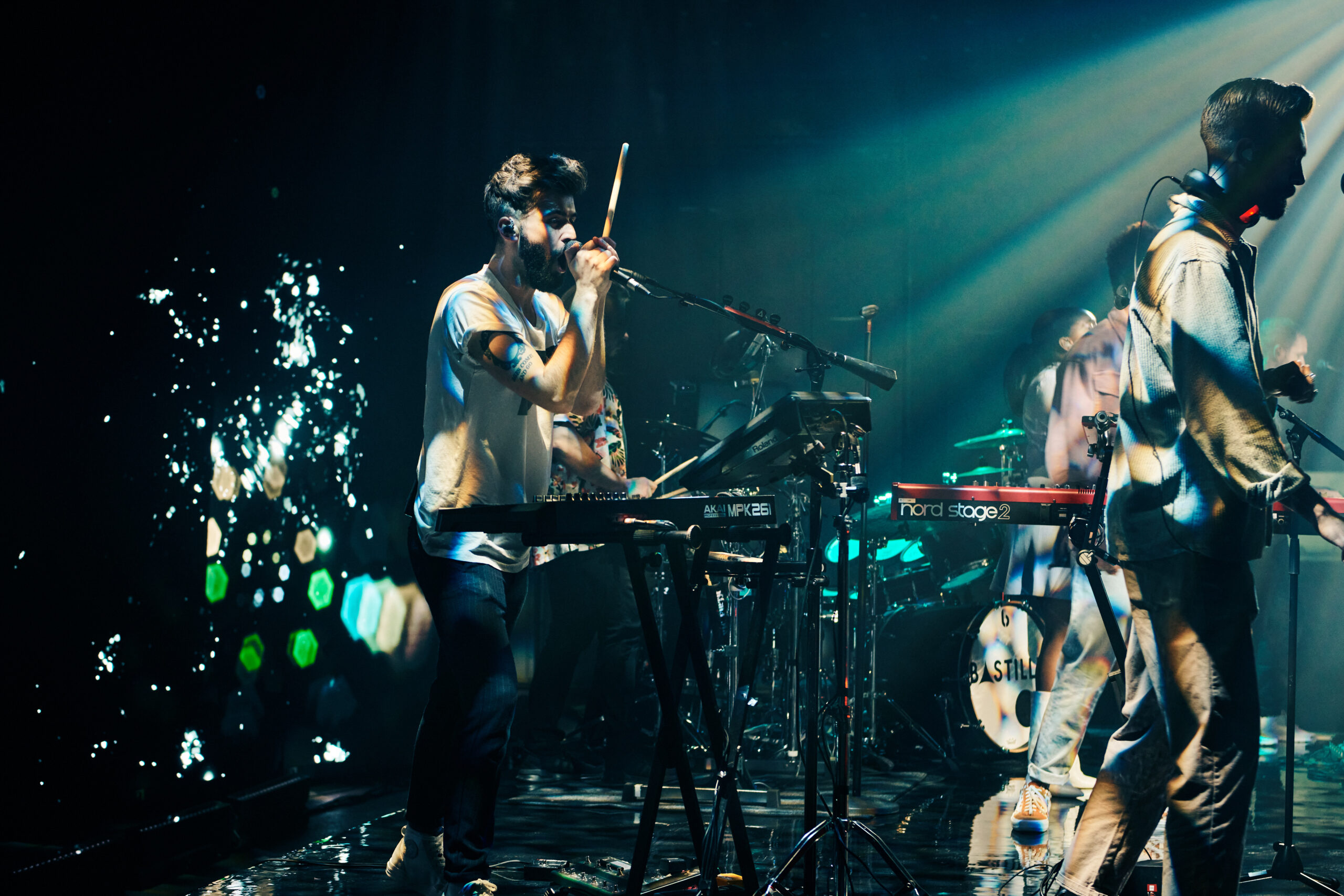