Written by Joe Jackson on Jul 6, 2022. Posted in Interviews

The Location Guide had a conversation with producer Neil Andrews from Pulse Films, celebrating the production company's 'Flip' commercial for B&Q winning a Bronze Lion for Achievement in Production at Cannes Lions 2022. We discussed how Neil and the team made the project a reality with Icon Films Sofia, exploring why Bulgaria was chosen for this monumental shoot. 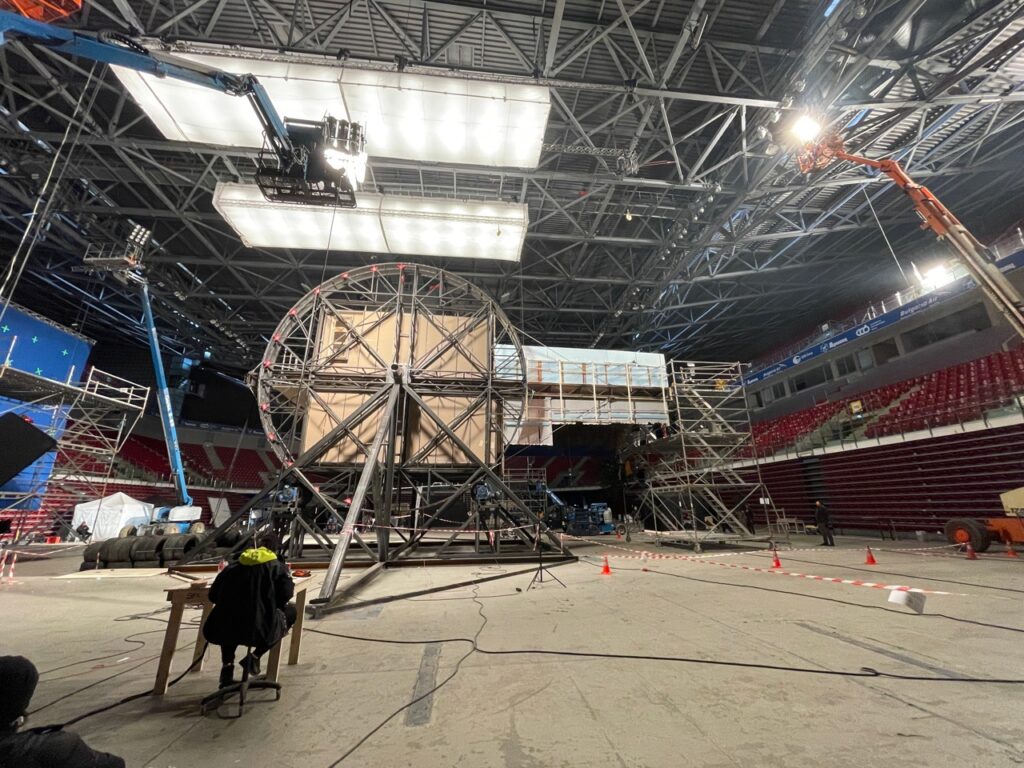 Why was Bulgaria chosen as a key location for the production?

Before the project was green lit, we searched for a shooting location that could deliver on three important levels. We knew that building a six storey structure, with the ability to flip 180 degrees, was going to be TOUGH, so we drew up a list of nations with a strong track record of large scale builds with a focus on quality and speed. We also needed a film centre that was proven for over-delivering on high quality service with value baked in. Bulgaria delivered on both those fronts, so it was just a matter of finding the location, as we needed a space far taller than any studio could provide. The mathematics behind our very basic sketches in the initial stages informed us that we required a 20m tall interior to house the structure. The guys at Icon Films Sofia came up trumps with a multi-purpose stadium which somehow had a window just long enough for our build and shoot, with ceiling heights of 22 metres. 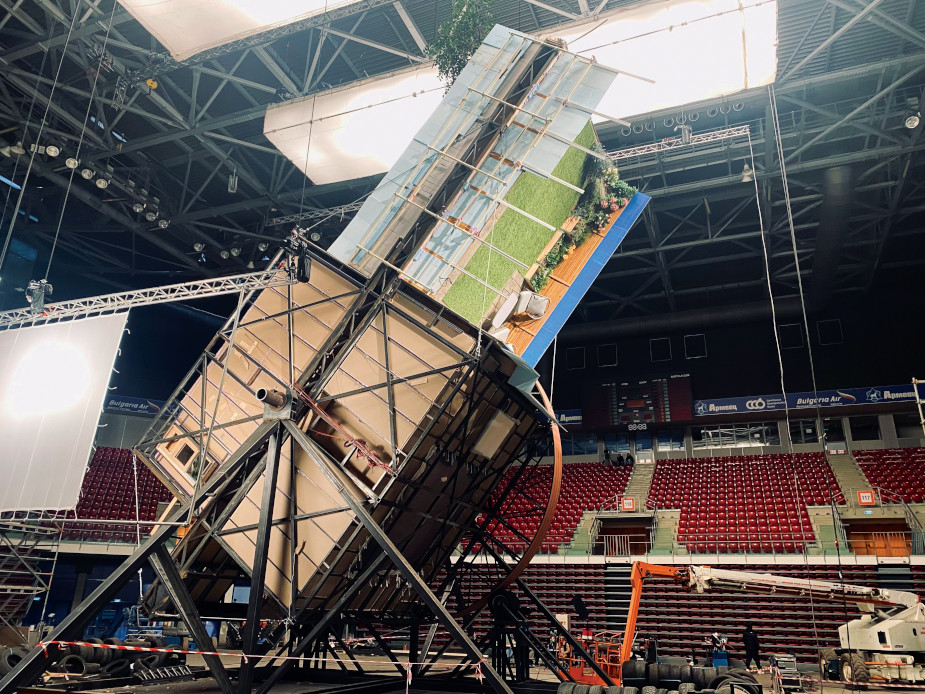 How did you create the set (or sets)?

With incredible difficulty! From the outset, we were fastidious to the core idea of this film - to somehow build a rig that had the ability of actually flipping on its head. Director Oscar Hudson’s early sketches of the rig helped conceive the design that we ended up with, but it was the skill and ingenuity of the SFX, art department and production teams to problem solve actually producing the rig.

During the initial two-week R&D phase, we role played various different designs, playing with concepts around how to drive and power the flip element of the set. The design that we landed upon was simple, but so effective. A single roomed house and garden was built on two sides of a hinged platform with a connected drive wheel to one side.

The construction of the set was very complex. Structurally engineered and built in stages, every piece of steel was measured, cut and welded by hand - absolutely nothing was off the shelf. To establish the design and placement of the dressing, identical standing sets were built whilst the structure was being completed. This allowed us to visualise and client approved the set to save time. But importantly, it also gave Oscar a playing field to begin blocking out the journey of both our hero and the camera, and crucially it allowed us to calculate the exact speed needed for the set to rotate as this was knitted into the action and edit length of the film.

Once the mammoth structure was completed, the motors were fine-tuned so that the speed of the flip married with our pre-vis, and finally the fitting and dressing could commence.

When finally completed, it was a marvel to watch in motion. Completely silent, the set was able to rotate 180 degrees in just 40 seconds flat!

What craft skills were needed to bring the director’s ideas to life?

More than any project I’ve been involved with, this project was made a reality by the hard work, ingenuity and resourcefulness of every single department to pull off Oscar’s vision.

The SFX and art department had the most obvious challenges, playing with gravity is really hard, and as a result we all had to react and adapt constantly to overcome the issues.

From figuring out how to film the action hand held whilst the set was moving, to Jess Hall (DOP) designing a lighting plan that gave consistent light mimicking daylight on both sides of the platform as it travelled, to rigging and choreographing all of the in-camera falling elements in the old house and garden. Furthermore, the stunt team figuring out the best approach for camera wire works to operate side by side of the talent wire, to the sheer logistics of shooting 16 metres above ground level. It was an incredible challenge on every level. 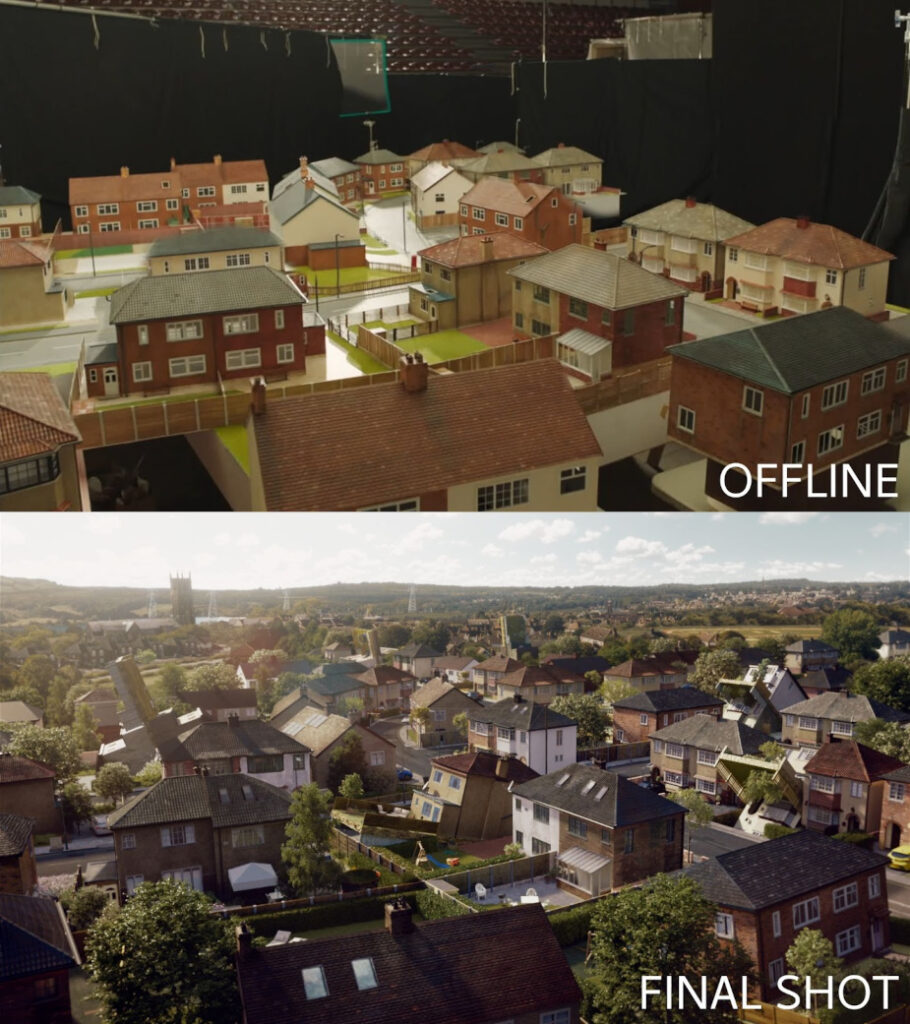 Were there any complications while shooting the project? What creative skills did you use to overcome these complications?

Where to begin? Every day presented a new challenge with its own unique set of difficulties that we had to find creative ways of solving.

But one of the elements that surprised us most, was tackling both what we see off the edge of our in-camera rig and also how we executed the end shot. From the start, we thought it would be more interesting and fun to have complete control over this, therefore we committed ourselves to building a scale model which would serve both purposes. It wasn’t until we scratched the surface of this concept, that we realised just what a hurdle it was. What scale to build to? How much to build? Does the view work for both shots? It took us a while to land on the exact solution.

Dan Betteridge and Kate McConnell had the arduous task of designing every nook and cranny of the model, which was then built by a local team in Sofia. Once the build was complete, on set we arranged the town in a formation that best suited our view for the end shot, and filmed this on the Alexa. The model set was then disassembled, with each building being scanned hundreds of times using photogrammetry. The results enabled Alex Snookes and his team at ETC to reassemble the town in post to complete the views that we see off the edge of our set. 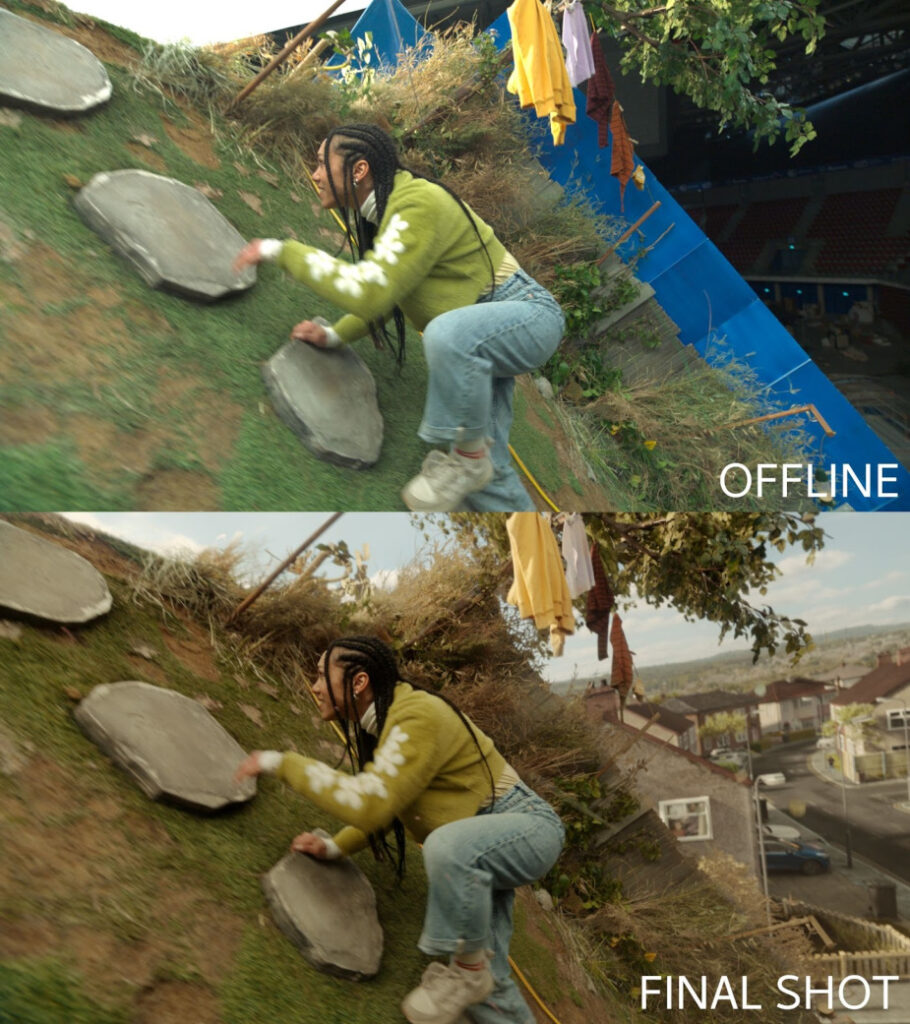 What makes Bulgaria standout as a filmmaking destination?

Bulgaria was a great location for this project. We relied on the abundance of a highly skilled crew on every level. Sofia has a long history of feature film production, which was really harnessed to pull off the design and build of the set in a matter of weeks.

We also benefited from the local stunt team’s exposure to large scale feature films - they really were the unsung heroes of this project. Right to the bitter end they never failed to keep adapting, coming up with new ideas to fight gravity whilst keeping everyone safe.

But it’s also the high level of production that we received whilst out there that makes it a great place to shoot. This was my first outing in Bulgaria, and although I had a good feeling from the team from the outset, I didn’t have a pre-existing relationship to fall back on to know that it would be a success. But the strength of the team, and the amount of care and belief they put into this project really shone through. Even at the stage where tension levels rose, the team stood firm and never cracked. I look forward to many more visits to Bulgaria. 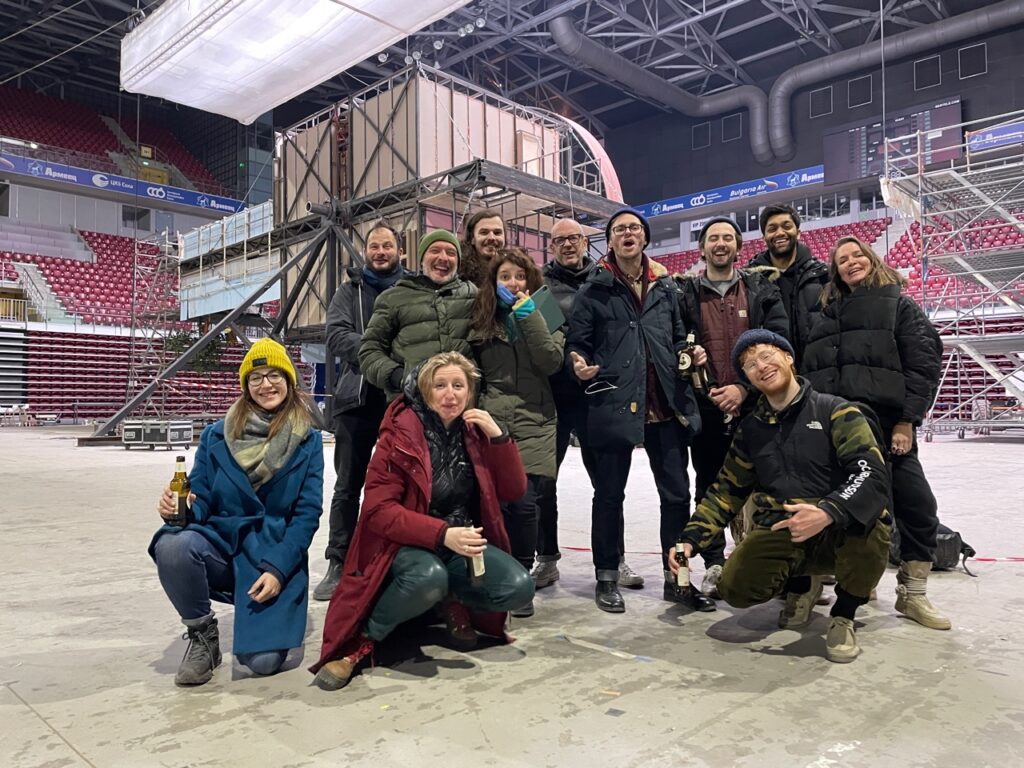 What would you recommend to filmmakers who are thinking about working in Bulgaria?

Check out the studios. In the hills above Sofia lives Nu Boyana Studios, which is the nucleus of the Bulgarian film industry. The studios are well used and very flexible, as is also the backlot which features standing sets dressed as London, New York and Rome. Whilst I was there, the NYC streets were being re-surfaced for a period film. Very cool!

Make sure you find time to go to the Sofia derby football match. Whilst it may be a slightly controversial excursion as highlighted by the recent departure of Alan Pardew as manager of CSKA Sofia (for very honourable reasons), it’s a cultural experience that won’t be forgotten. Particularly if it’s played in a snow blizzard as we experienced!

And to that point - Sofia’s winter does run slightly later than many other European film centres, which can come in handy for some briefs!

What will you be working on next?

Having just returned from shooting a project in Sweden with Ninian Doff, I’m working on a few exciting pitches and excited to get my teeth into the next challenge. 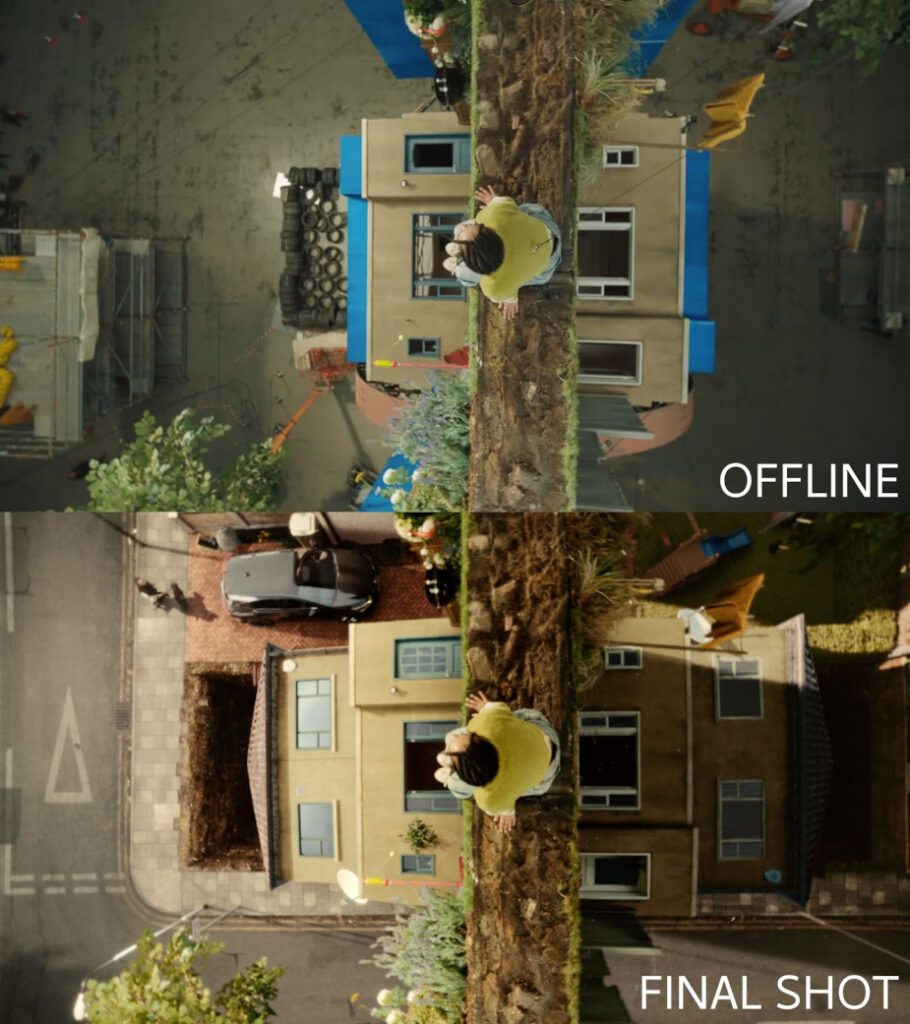