FOCUS talks to Lefteris S. Eleftheriou, Head of Filming Unit at Invest Cyprus and Chairman of the Cyprus Film Commission 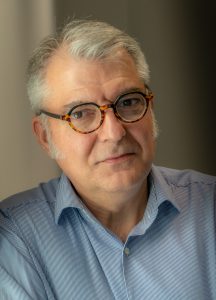 What brings you and Invest Cyprus / Film in Cyprus to FOCUS this year?

Our efforts to promote Cyprus as an attractive film destination began a few years ago, with visits to several countries and networking with key industry professionals. With the recent introduction of the incentives scheme offered for audiovisual productions, a specific roadmap with promotional activities has been formed, including of course participating at several international events to promote our scheme and our country of course. Part of this plan was a road trip in London this summer, where we met with key UK film makers and industry figures, all of which suggested to attend the Focus event as one of the most important business of production events in Europe.

Focus is a well-organized event, which takes place in one of the most vibrant cities in the world. London plays a significant role in the film industry. Actually, if you want to make your case known to the world, especially for newly established film schemes, like Cyprus, you should present your case in London. Participating at such a well-known and well-attended event is key to promoting Cyprus as a film destination and getting our scheme known to the British film community and of course the European market in general. As the representative of Film in Cyprus, I look forward to meeting with prominent figures and industry leaders attending the event and have productive talks exploring the opportunity of attracting productions in Cyprus and also share and gain knowledge and experience.

Please tell us briefly about Cyprus as a location filming destination?

If you are looking for an idyllic filming destination, then Cyprus should definitely be at the top of your shopping list. The island is a unique natural film studio in itself, featuring a polymorphic landscape with sceneries never shown on film. Deep blue seas and sandy beaches, captivating forests and breath-taking mountains, picturesque villages and modern cities, all in close proximity. Cyprus has a pleasant Mediterranean climate with year-round sunshine. In such a small island with relevantly short distances, one can literally jump from the one tip of the island to the other, from the coast to the mountains in literally just a 30-minute drive. The rich historical and cultural landscape is reflected in the hundreds of archaeological sites

scattered throughout the country, reflecting different cultures, such as Ancient Greek, Roman, Byzantine, Ottoman, Medieval and Modern of course. The Cyprus Film Commission has the responsibility to act as a facilitator for preapproved productions, with regards to crew finding, location scouting, permits, licenses etc.

Besides the natural beauty of the country of course and the favorable weather conditions and easy connectivity, Cyprus is also an attractive investment for producers looking for a unique destination with the right formula of incentives in place.

What foreign productions have recently been filming in Cyprus?

As I already mentioned, we are new in the industry. Nonetheless, we do have a portfolio as a country. The most recent example is the feature film “smuggling Hendrix produced by AMP Filmworks, Marios Piperides and Janine Teerling. The film was deemed as the best world narrative feature at the Tribeka Film Festival 2018 in New York and the best first feature film at Festival de cinéma de la ville de Québec 2018. Another example is the documentary “The Ghost of Peter Sellers” (2016). The film was produced by Vegas Media and Paul Iacovou and directed by Peter Medak who is the actual director of the “’Ghost in the Noonday Sun’” an unreleased film, starring Peter Sellers and filmed in Cyprus in 1973. The “’Ghost in the Noonday Sun’” was screened at Venice Film Days 2018, Telluride Film Festival 2018. http://www.theghostofpetersellers.com/

There are more examples of course but I would also like to mentioned that Cyprus is the shooting place of many British Army Commercials. The production company is Smugglers and the production manager is Costas Pitsilides, the director is Henry Alex Rubin. DOP: Ken Seng

To meet Invest Cyprus / Filming in Cyprus team at FOCUS 2018 at the Business Design Centre in Islington in London on the 4th & 5th of December 2018 register for a FREE delegate badge here.

Lefteris S. Eleftheriou is a Senior Investment Promotion Officer at Invest Cyprus, the national body responsible for attracting and facilitating foreign direct investment into Cyprus. In his capacity, Lefteris is proactively promoting Cyprus abroad as an attractive destination in key economic sectors, being also involved in the development of new growth areas and the promotion of reforms to improve the business and investment environment of the country.

In 2013, he took a lead role as part of a team assigned to prepare the strategy for the development of the film industry in Cyprus. Following intense efforts, in 2017 the Council of Ministers adopted the Cyprus Film Scheme. Representing Invest Cyprus, Lefteris is now the Chairman of the Cyprus Film Commission, the body responsible for assessing applications for the Scheme, leading also the national effort for the promotion of Cyprus as an attractive film destination.

Lefteris holds a Bachelor degree in Political Sciences and Philosophy from the Hunter College of the City University of New York and a Master Degree in Politics from New York University, having also attended Law courses at the University of London. During his eight-year stay in New York, as well as following his return to Cyprus, Lefteris was professionally engaged in the field of political management, lobbying and campaign consulting. Lefteris has also worked as a Marketing Manager in the corporate intelligence services, covering the Mediterranean region; Middle East; Gulf and Eastern Europe.