What brings you and Florida’s Paradise Coast Film Commission to FOCUS this year?

Our film commission has been coming to this event from Year One and we think it’s just great. We can re-connect to our UK peers, clients in Europe, and take advantage of the seminars and events. 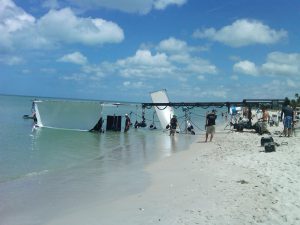 Most clients know Florida or have an image of Florida and this year I will be partnering with the Keys and Key West and the Miami Film Commissions to really cover the south of the state. We have the best beaches, climate, amenities and we want to remind everyone how manageable it is to shoot in our state. It’s also fun to show someone a location that they’d never associate with your area – something that looks totally from somewhere else and show the diversity that exists within our tropical locations.

What productions have recently been filming in the Paradise Coast.

Please tell us briefly what Florida’s Paradise Coast has to offer as a location filming destination.

As a filming destination the Paradise Coast has an international airport that is 30 minutes away from world-class hotels and restaurants. We’re on the Gulf of Mexico and below us are the mysterious Ten Thousand Islands. Our film office will assist you in every way to make your shoot as easy and as productive as we can. We process film permits, can assist with crew and accommodations and are happy to scout the right location for you.

What Florida state filming incentives will you be promoting to producers and production professionals at FOCUS 2018?

Miami Dade County has a new attractive incentive in place and if you come by our booth we’ll be happy to discuss if it will work for your production.

Maggie McCarty received her undergraduate degree from the UCLA and her graduate degree from the University of Southern California’s School of Cinema. After graduation she worked as a freelance script reader, a production secretary on several music videos and as the assistant to the musical supervisor on the motion picture, Flashdance. While at Paramount Pictures she went to work for Taylor Made Productions and then moved to Walt Disney Studios to work in TV development. She has been the Paradise Coast Film Commissioner for over 15 years. Maggie is a member of the Association of Film Commissioners International and Film Florida. In addition, she has served on the board of the Southwest Florida Film Society and the Naples International Film Festival.