Written by Murray Ashton on Mar 15, 2012. Posted in Interviews

Kent attended the California Institute of the Arts for Fine Art Photography and was first introduced to locations by shooting houses and working as a site rep for a location agency in Los Angeles as a summer job. He was brought on as an assistant in the mid-90s. 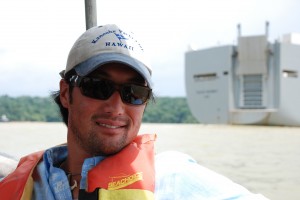 Kent had been coming to Hawaii to visit family for many years and his familiarity with the islands and the culture helped him land a couple of commercials. He then joined the crew of the re-launched Hawaii Five-0.

I've worked throughout the Pacific Rim but have been living and working in Hawaii for the past couple of years. While the state itself covers almost 11,000 square miles spread out over 1,500 miles, the bulk of filming occurs on the island of Oahu, which is about 600 square miles.

On Oahu we have many diverse looks from the thriving metropolis of Honolulu to tropical jungles, beautiful beaches and vast ranch lands. The TV show Lost was a perfect example of what’s available on Oahu, as evident by their ability to cheat Sydney, Seoul, Iraq, England, New York and Los Angeles without ever leaving the island.

Additionally, on the island of Hawaii you can find the active volcanoes of Mauna Loa and Kilauea. There’s also the dormant volcano Mauna Kea, which at 4,205 metres in elevation is subject to seasonal snowfalls and an alpine environment.

Hawaii has been Hollywood's tropical back lot since the 1950s when features and television shows such as From Here to Eternity, Blue Hawaii, In Harm's Way, the original Hawaii Five-0 and Magnum PI all visited. The crew is well seasoned with recent work including Battleship, Pirates of the Caribbean 4 and The Descendants over the last couple of years, and it’s deep enough to support two network TV series and a major motion picture at the same time.

Studio space is limited but full camera, grip and lighting packages are available with all the resources of Hollywood available only a short flight away.

The multitude of remote beaches, lush green jungles and year-round tropical climate are our biggest draw, but the World War II facilities of Pearl Harbor, Ford Island and the USS Missouri have all seen their share of the spotlight.

The fact that it snows on Mauna Kea always comes as a big surprise and the modern architecture of downtown Honolulu brings to mind more of an international city such as New York or Tokyo, rather than the image of a lazy island resort that is commonly suggested by Hollywood.

We're currently working on securing a USD500 million construction project and negotiating the various legal entities and mitigating risk exposure to all parties involved has proved to be a handful. We've also previously filmed at an active cement quarry and a container yard, while late-night gun fights in exclusive neighborhoods home to multi-million dollar estates and politically influential people can be a challenge.

Most of my experience has been in commercials, but I’ve also been known to do a feature or two.

In 2010 our feature projects included Battleship, Pirates of the Caribbean 4, Journey 2, The Descendants, The Tempest and Soul Surfer. The pilot for TV show The Event filmed here and we have the TV series Hawaii Five-0 and Off the Map.

Those with fair skin should take care to apply sun screen as we are around 20 Degrees North. We have first-class medical facilities and as with any provincial area care should be taken to respect the local cultures and customs.

Honolulu International Airport is the principal gateway for the state of Hawaii with flights to and from all major Pacific Rim destinations.

The Marriott Ihilani was featured by Blue Crush, The Turtle Bay Resort is used frequently by features shooting on the North Shore and seen on Forgetting Sarah Marshall, while the Hilton Hawaiian Village currently houses the visiting Hawaii Five-0 cast and has been featured on several episodes. The Aston, Marriott, Kahala and the Modern have all also been popular crew housing.

Besides the variety of ocean-based opportunities from surfing, sailing, diving and simply sitting on the beach and sunning, we have world-class golf courses, shopping, dining and spa resorts.