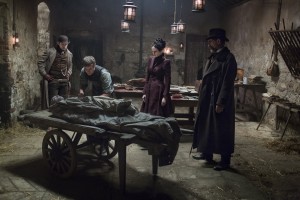 “Ireland has been a truly inspirational place to film Penny Dreadful,” said Logan: “Not only does it have deeply talented crews, but the city's unspoiled architecture perfectly captures London at the turn of the last century. Also the ghosts of Bram Stoker and Oscar Wilde walk these streets, which is pretty inspirational for us too.”

Added Ireland’s Minister for Arts, Heritage and the Gaeltacht Jimmy Deenihan: “Production activity has increased by 42% since 2011 as a result of real growth in the number of major international TV drama productions being produced in Ireland.

“Penny Dreadful, a project worth EUR33 million to the Irish economy, is an excellent example of this. By improving the incentives for producing film and television in Ireland, this government is aiming to grow the sector even more.

“Throughout 2014, I will continue to promote Ireland as an attractive location for film and television production. We want to see more films and TV series being made here – and more people working in film – in the period ahead.”

Ireland has been a truly inspirational place to film Penny Dreadful. Not only does it have deeply talented crews, but the city's unspoiled architecture perfectly captures London at the turn of the last century.

Ireland offers a generous filming incentive through its Section 481 programme and also hosts History Channel’s scripted historical drama series Vikings, which is based at Ashford Studios in County Wicklow. Penny Dreadful was supported by the Irish Film Board.

The BBC’s period crime drama Ripper Street also doubles Dublin for Victorian London and was recently renewed for a third series, despite being cancelled by the BBC last year.

Penny Dreadful launches in May this year.