The BBC has commissioned a new drama series set in the Cook Islands in the South Pacific Ocean. Tatau will follow a young Englishman travelling with a friend to the Cook Islands, where he finds that the Maori tattoo he got in London has marked him out for a mysterious purpose. 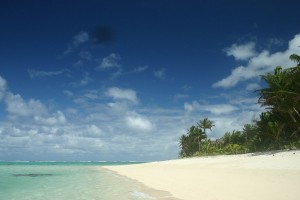 Tatau will be co-produced by Touchpaper TV and South Pacific Pictures, in association with BBC America.

“From the makers of Being Human, Tatau is an ambitious new BBC Three drama series that will raise the bar for viewers of the channel who have a real appetite for distinctive stories from all different worlds,” said Ben Stephenson, Controller of BBC Drama.

Added Sam Bickley, Channel Editor of BBC Three: “BBC Three has rightfully made a name for itself producing multi-award-winning dramas like In the Flesh, The Fades and Being Human. Tatau very much continues the channel’s tradition for commissioning original, innovative and exciting drama that you would not expect to see anywhere else.”

Situated north-east of New Zealand, the Cook Islands comprise a network of 15 small islands and atolls, and are a popular tourist destination. The islands have also attracted TV productions such as the high-profile US reality format Survivor. Earlier this year, Air New Zealand shot in the Cook Islands for an airline safety video featuring models from Sports Illustrated’s Swimsuit franchise.

The Tatau commission comes shortly after BBC Two and BBC Worldwide Australia and New Zealand produced the period drama Banished near Sydney, inspired by the establishment of the first Australian penal colony in the 18th Century. Before that, the BBC was involvement with Jane Campion’s crime drama miniseries Top of the Lake, which filmed near Queenstown in New Zealand.