Jackie Chan's new historical action movie Dragon Blade co-stars US actors John Cusack and Adrien Brody and showcases a shifting strategy in Chinese filmmaking. The country is looking to assert itself internationally by working with American talent and investing in Hollywood shoots. 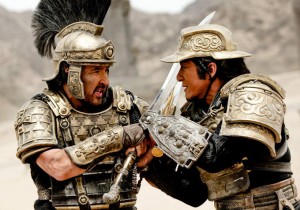 “Shooting in America is very comfortable,” Chan told Indiewire of his previous filmmaking experiences: “Things are comparatively organised and systematic. And the level of special effects and computer graphics used in America is much higher; they can make the action scenes really sensational.

“Shooting in Asia is really quick and efficient since we don’t have Hollywood budgets. Also, our special effects and computer graphics technique are not as good as in the US. But then we're able to make something really authentic with real locations and real action.

“The Chinese movie market is expanding at an astonishing rate. I think that is good as more international filmmakers have now set their sights on the Chinese movie industry for future projects.

“Not only Hollywood stars but also Hollywood directors are coming to China to make films. This collaboration will bring the audience more well-produced films as filmmakers learn from each other.”

Supernatural monster movie The Great Wall, an English-language Chinese movie starring Matt Damon, is now the biggest ever US-China co-production and is scheduled for release in late 2016. China will first try to connect with international audiences with the futuristic disaster movie Lost in the Pacific, another English-language effort that stars US actor Brandon Routh.

Hollywood is interested in China mainly in terms of distribution and exhibition. The studios are increasingly making deals with state-owned production companies to get around China’s strict annual quota on foreign film releases.