Written by Tom Deehan on Apr 19, 2018. Posted in General Interest

First wave of jurors announced for the Young Director Award 2018

The YDA has unveiled its first wave of jurors from Europe and Asia-Pacific, with the remaining jurors to be announced in the coming weeks. The list includes an array of production professionals working across film, TV and commercials content. 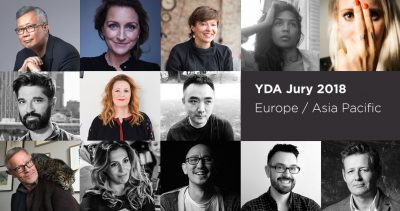 This year’s jury will be chaired by PRETTYBIRD Vice President and Executive Producer, Ali Brown.

Commenting on the announcement, YDA President, Francois Chilot explains: “these jury members represent some of the biggest and most creative companies from the two regions we’ve announced so far. Their expertise and understanding around new directing talent, and what it takes to shine in the current directorial climate, will ensure that the work awarded at this year’s YDA will be both brilliant and deserving. I am looking forward to witnessing their conversations and celebrating their decisions.”

Contestants still have until May 15th to submit their entries for this year’s YDA. Click here to enter.