Jeep has engineered a spectacular showdown in central Budapest between one of its special edition Wrangler vehicles and a helicopter gunship. The spot is a commercial tie-in between the Call of Duty: Modern Warfare 3 videogame and the Wrangler vehicle, which carries the game’s branding.

In the 60-second spot a Jeep Wrangler morphs from game footage into the live-action world and tears down a city street, dodging gunfire, a tank and rocket launchers before a final gunship showdown. It was filmed over four days in downtown Budapest.

We prepared the shoot in less than two weeks – a short amount of time by any standard.

Zsofia Kende serviced the shoot for Angel Films in Budapest: “We prepared the shoot in less than two weeks – a short amount of time by any standard – and then filmed over four days in downtown Budapest. 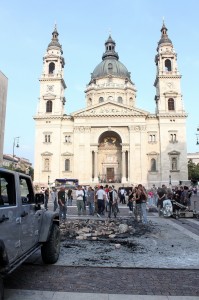 "We got permission from the police and local Government to set up temporary road closures, and we had set dressing in the form of fire, dust and general debris to deliver the war-zone effect.”

The spectacular opening shots of the Jeep crashing through a street barrier were filmed using a Phantom camera that was rolling at 600 frames per second to achieve the super-slow-motion effect in post-production.

Kende adds: “Burning damage was added to the cathedral digitally afterwards, while the helicopter gunship that appears in the final shots was filmed separately on an airfield outside the city and composited in post-production as well.”

Budapest was originally chosen by the production because they wanted a double for Paris, but the city was just as convenient when the brief changed slightly to a generic European metropolis. Tinker Tailor Soldier Spy and World War Z are among the high-profile feature projects to have filmed in Budapest recently.