Canadian production company Sons and Daughters filmed on location in downtown Toronto for a new wintry spot for Nissan. Winter Warrior depicts a frozen business district where a Nissan driver bravely rescues a stranded family from an army of evil snowmen. 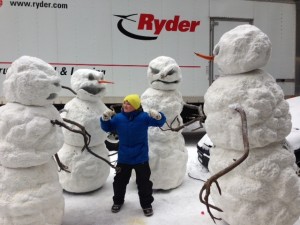 “For the launch of this car at this time of year, a winter location, plus a Canadian location were of paramount importance,” said Allen Oke, Executive Creative Director at TBWA\Toronto: “The temperatures here at the time of year it was filmed were cold enough to keep the snow on sets snowy, the ice icy, all the while looking realistic and natural.”

Although the weather in Toronto was cold on the shoot days there was little actual snowfall, so snow was instead brought in specially.

“We used over 90 tonnes of real snow for our in-camera snow dress - all foreground and mid-ground - and post added background elements, as well as falling snow,” commented Liane Thomas and Mark Zibert of Sons and Daughters.

The snowmen were created with a blend of physical and visual effects. Seven different models were built by Los Angeles-based workshop Legacy Effects, while post-production house The Mill animated their movements.

We used over 90 tonnes of real snow for our in-camera snow dress - all foreground and mid-ground.

“It was an extremely challenging schedule and shot list,” added Oke: “Temperatures were slated to grow mild with a threat of rain, something that would drive costs up and ruin any momentum we were gathering. Luckily we were able to keep pace - the weather held up.”