A new film studio is to be built in the city of Calgary in Alberta, Canada, and could help attract more shoots on the scale of the recent Klondike. The new facility will offer two sound stages of 20,000 square feet and 30,000 square feet, respectively, as well as extensive workshop and warehouse space. 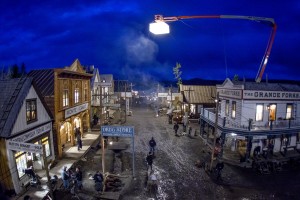 “We’re confident in the new business model developed by Calgary Economic Development and believe it has what it needs to be successful in attracting and retaining film productions,” said Alberta’s Minister of Culture, Heather Klimchuk.

“This move forward is good for the industry and good for Alberta – Alberta’s film, television and digital media industry was responsible for over CAD400 million in economic activity over the last five years.”

Added Calgary Economic Development President and CEO Bruce Graham: “We’re pleased to have been selected as the proponent for the Calgary Film Studio. By working with industry and post-secondary partners to develop purpose-built facilities, we envision the studio will allow the creative industries sector to realise significant growth potential, increase the retention of local talent and support the diversification of our economy.”

The new studio will cost about CAD23 million and while details of the specific site haven’t yet been confirmed it’s scheduled to open in summer 2015.

This move forward is good for the industry and good for Alberta.

Alberta is a popular international filming location that offers production support through the Alberta Media Fund. Calgary in particular has recently doubled for the US through three seasons of Western TV drama Hell on Wheels and also doubles for the northern US in an upcoming TV miniseries based on the Coen Brothers film Fargo. In addition, the period miniseries Klondike modified an existing set at the CL Ranch & Back Lot to recreate Dawson City in northern Yukon.