Jude Law has joined forces with Jake Scott of RSA Films for a stylish new spot for Johnnie Walker Blue Label. The Gentleman’s Wager shows Law on a yacht in the Caribbean pledging to win the vessel from Italian actor Giancarlo Giannini by way of a dance in a dusty London theatre. 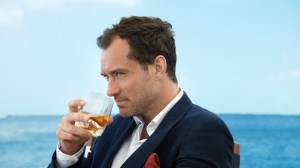 “The British Virgin Islands were chosen for their exotic landscape, crystal blue calm waters and warm climate,” explains Mike Byrne, the film’s writer: “The Amalfi coast, Italy, was also considered, however the swell and tides would have been an issue for filming.”

Guana Island was the production’s main filming location over the course of the British Virgin Islands shoot, with a Local Production Manager acting as a liaison between RSA Films and the British Virgin Islands Film Commission. The crew was based on Virgin Gorda east of Guana and the film was shot using GoPro camera and helicopter photography, supplemented with B-roll footage of the local area.

The spot’s theatre sequence was filmed at Wilton’s Music Hall in east London, a venue which is reportedly the oldest of its type in the world. Parts of the building date back to the mid-18th Century and the existing music hall was fitted in 1859.

“The film is about improvement and progress and this is something I try to do in my work and my everyday life,” said Law: “I had to learn new skills shooting this film and that combined with the places we visited and shot in, alongside working with Jake and with Giancarlo, made it a truly rare experience.”