A new TV drama telling the life story of famous mountaineer Sir Edmund Hillary is filming on location in New Zealand and Nepal. In 1953, Sir Edmund and his Nepalese Sherpa Tenzing Norgay became the first people to reach the summit of Mount Everest. 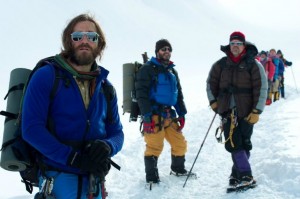 Named Hillary, the series has been created by Tom Scott, who has adapted his own biography of Sir Edmund that was written following detailed conversations with the man himself.

“This is about the man - not the mountain - allowing us to understand Sir Edmund and his deepest inner workings, all wrapped around a life packed full of extraordinary adventure and adversity. It is an honour and privilege to make the series, but also a huge responsibility.”

Hillary will be the second high-profile recent production telling Sir Edmund’s story. The 2013 docudrama Beyond the Edge doubled New Zealand’s Tasman Glacier for Everest, but also used footage shot on the real Himalayan peak when a crew member scaled the mountain as part of an actual expedition.

A modern-day tale of tragedy on the world’s tallest mountain is scheduled for release later this year. Jake Gyllenhaal and Keira Knightley lead the cast of Everest, which tells the story of a freak snowstorm on the peak in 1996 that caused what was until just last year the biggest loss of life ever on the mountain.

Everest has filmed on location in Nepal but has also doubled the Italian Dolomites for the Himalayas.